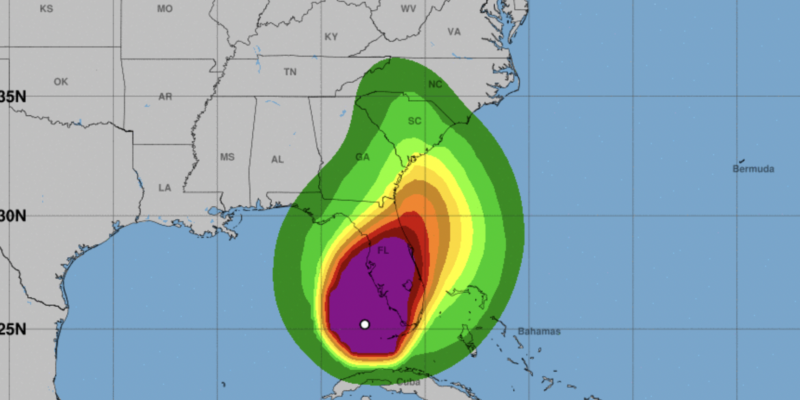 The worst-case scenario for Florida has happened. Hurricane Ian is now a Category 4 storm that could be upgraded to Category 5 just as it impacts Southwest Florida.

There was a bit of a wobble northwest, but it's tracking to hit north of Naples.

The latest NOAA advisory still has the storm traveling at 10 mph heading straight for the west coast.

The Weather Channel’s Jim Cantore is already in Punta Gorda. We all know what that means.

If you have been ordered to leave your home. Get on it.

Flooding will impact all of Florida. 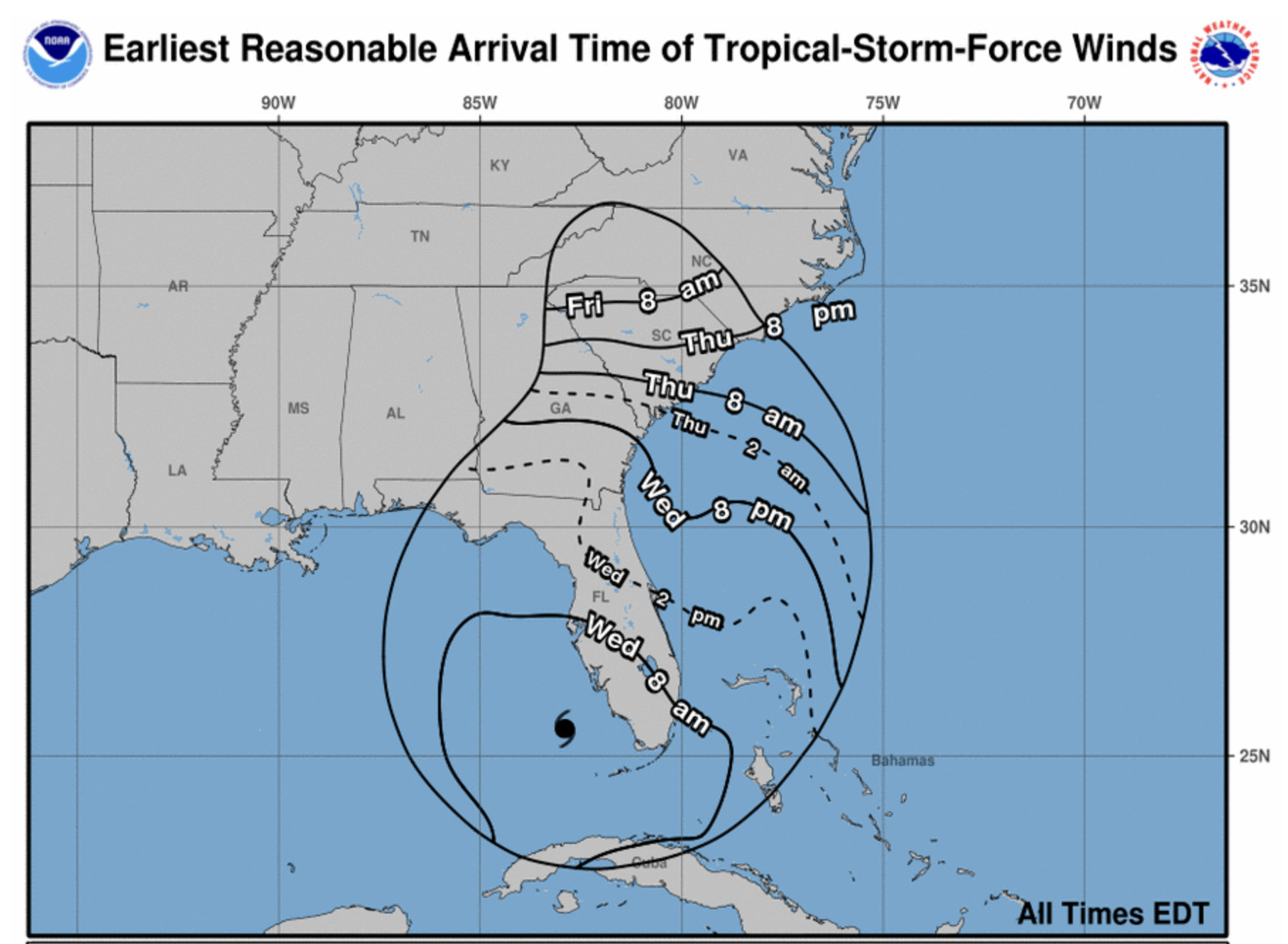 The POLITICO is being accused of politicizing the storm.

This is political season and all eyes will be on Gov. Ron DeSantis and how he deals with the storm.

Unfortunately, there are people rooting for the hurricane because of their hatred from DeSantis runs so deep in their souls.

This storm would have rolled through regardless of who is in the Governor's mansion, so we should all hope that DeSantis succeeds in his emergency response efforts.

Jimmy Patronis-Florida is blessed with the best Urban Search & Rescue Teams in the nation. They’re second to none when it comes to responding to hurricanes. Thank you @GovRonDeSantis

@FDOT_Secretary. Thanks to your leadership, a lot of lives will be saved. #HurricaneIan

US Rep Kathy Castor-Prepare for catastrophic flooding. Roads and bridges will be impassable. High winds will knock out power. If you were thinking about staying put #Tampa, please reconsider!

"Florida Elected Officials Unite in Preparation for Hurricane Ian" by The Floridian's Grayson Bakich—Hurricane Ian is blowing its way to Florida, expecting to make landfall this mid-to-late this week. Gov. Ron DeSantis (R) has already declared a state of emergency for all 67 Counties and called for the deployment of 2,500 National Guard. Monday morning, Gov. DeSantis tweeted a reminder to Floridians to have proper preparation and supplies ready for the coming days.

"Progressive Carlos Smith Voted for DeSantis's Budget While Voting Against Anti-Socialism Bill" by The Floridian's Javier Manjarres—In one of Florida’s most competitive swing State House seats in the 2020 midterm election (HD 37), Progressive Rep. Carlos Guillermo Smith (D) has come out swinging against his Republican opponent Susan Placensia over accusations she has made against him in a campaign mailer.

"Joe Biden Alleges Congressional Republicans Will Jail Doctors for Doing Their Jobs" by The Floridian's Grayson Bakich—Last week, Charlie Crist's pick for Lieutenant Governor Karla Hernandez-Mats mockingly compared the Florida legislature to special education students. She describes herself as trained to work with emotionally handicapped students, thus is qualified to deal with the "dysfunctional" legislature.

"Kat Cammack Introduced JASON Act, Looks to Curb Illegal Immigration" by The Floridian's Jackson Bakich—As the nation debates whether the southern border is secure, a Republican member of Congress from Florida has brought forth legislation in hopes to curb entry of undocumented immigrants in the case of a mass influx scenario.  Rep. Kat Cammack (R-FL) introduced the Justified Action for Securing Our Nation (JASON) Act.

"Rubio Sends Letter to Blinken, Yellen Demanding Sanctions on North Korea" by The Floridian's Jackson Bakich—As the world watches statesmen navigate the geopolitical issues that concern the United States such as our relations (or lack thereof) between nations such as China and Russia, many forget to include North Korea and the threat it poses to countries around the globe. However, Sen. Marco Rubio (R-FL) alongside Sen. Bill Hagerty (R-TN) sent a letter to Secretary of State Tony Blinken as well as the Secretary of the Treasury Janet Yellen...

"Karla Hernandez-Mats Doubles Down on Comparing Legislature to Special Education Students" by The Floridian's Grayson Bakich—Last week, Charlie Crist's pick for Lieutenant Governor Karla Hernandez-Mats mockingly compared the Florida legislature to special education students. She describes herself as trained to work with emotionally handicapped students, thus is qualified to deal with the "dysfunctional" legislature.

"Scott, Steube Condemn New 'Woke' Air Force Academy Diversity Training" by The Floridian's Jackson Bakich—As the United States appears to become more and more “woke” and commonly used words and phrases are changed on a regular basis, many Americans fear when the wokeness creeps into our armed forces. Recently, Fox News has reported that the Air Force Academy has instructed their cadets to use more gender-neutral language such as “parent or caregiver” rather than mom and dad. “Color conscious” is now preferred over colorblind as well.

"Rubio Team Says Demings is in ‘Hiding’ by The Floridian's Daniel Molina—Since the midterm general election is fast approaching, Democrats across the country are vying to campaign with President Joe Biden (D). However, the Rubio campaign is warning that Florida Rep. Val Demings (D) is avoiding campaign stops with the president. Saying that Rep. Demings will be “hiding in her office in Washington,” the Rubio campaign inferred that her voting record could come back to haunt her in November.

"Taddeo Challenges Salazar to 4 Debates" by The Floridian's Daniel Molina

"Rubio Questions USAID About Wuhan Practices" by The Floridian's Jackson Bakich—The U.S. Agency for International Development (USAID) is being accused by Sen. Marco Rubio (R-FL) of paying the EcoHelath Alliance in taxpayer dollars in order facilitate funds (including federal grants) to foreign researchers such as the Wuhan Institute for Virology. According to the National Institutes of Health (NIH), the research activities at the Wuhan Institute were “serious bio-safety concerns.”

"DeSantis fed and Housed Homeless Illegal Immigrants Before Flying Them to Martha's Vineyard" by The Floridian's Grayson Bakich—New details surrounding Gov. DeSantis' moving of 50 illegal immigrants to Martha's Vineyard continue to emerge. Democrats nationwide furiously allege DeSantis engaged in "human trafficking" and "kidnapping" of these migrants, and, as we reported earlier, Gov. Gavin Newsom (D-CA) sought to press charges against the Florida Governor. The DeSantis administration denies these accusations and has provided some c

ontext to the decision that refutes Democratic talking points.

"Cammack Claims Gov. Newsom is "Jealous" of DeSantis While Discussing Border Crisis" by The Floridian's Grayson Bakich—Governor Ron DeSantis's decision to send 50 illegal immigrants to Martha's Vineyard last week continues to stir up emotions. Monday morning, Congresswoman Kat Cammack (R-FL-3) tweeted her segment on Fox News' Faulkner Focus discussing the fallout of the move, specifically how California Governor Gavin Newsom sought to press kidnapping charges against DeSantis. Rep. Cammack points out that Newsom seems to be focused more on getting back at DeSantis than he is on fixing California's myriad of problems.

The Floridian's Jackson Bakich—As the general election draws nearer and nearer, Americans are starting to pay more and more attention to their local races and how they are going to use their vote at the ballot box this year. That is why we sat down with Dr. Drew Montez Clark (R), the District 20 Republican congressional nominee challenging incumbent Rep. Shelia Cherfilus-McCormick (D-FL) in November.