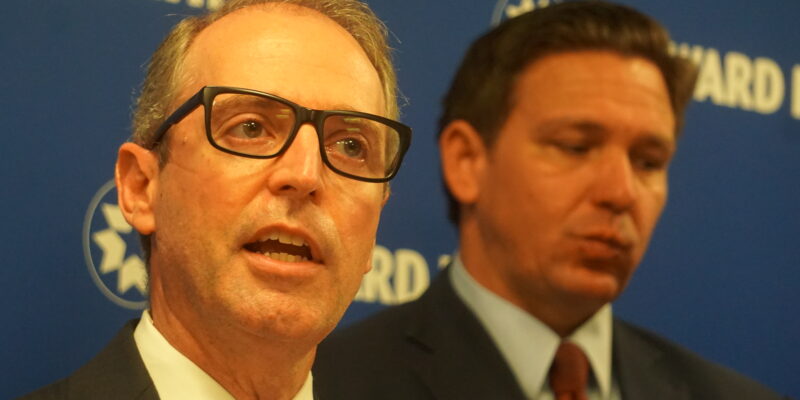 The feud continues between Florida Gov. Ron DeSantis and President Joe Biden. This time Gov. DeSantis takes a big swipe at President Biden for cutting supplies of the Regeneron Monoclonal treatment to Florida.

The Floridian took part in a news gaggle at Broward Health on Thursday afternoon, where DeSantis said he was going to “fight like hell” against the Biden administration for cutting the supply of the life-saving treatment. READ MORE

DeSantis told reporters that his office has already spoken to another maker of the treatment— GlaxoSmithKline— about bringing in their Monoclonal treatment. DeSantis said that the GlaxoSmithKline treatment appeared to be more effective than the Regeneron one.

DeSantis also shot down the false narrative that Agriculture Commissioner Nikki Fried and other Florida Democrats have been pushing about his support for vaccines.

“Yes, get vaccinated,” stated DeSantis as he said that both vaccines and Monoclonal treatments were part of his overall plan to combat the virus. READ MORE

—Rep. Anthony Sabatini-All 50 States should receive an Election Audit! So I filed House Bill 99 to audit Florida. But there is ONE PERSON standing in the way of my full forensic independent audit: RINO @ChrisSprowls—an acolyte of @JebBush He says we don’t need election integrity. Remember this lib

—US Rep Kathy Castor-As we #BuildBackBetter, we are making historic investments in American families. By finally expanding Medicaid, we will improve health outcomes, lower health care costs and save lives. #MedicaidSavesLives

“DeSantis: Biden is ‘Targeting Floridians’” by The Floridian’s Daniel Molina—Tension continues to rise between Florida Governor Ron DeSantis (R) and President Joe Biden (D). At first, both were at odds regarding mask mandates, vaccine mandates and vaccine passports. Now both appear to be at odds regarding monoclonal antibody treatments. In an announcement shared by Friends of Ron DeSantis, the Governor accused the Biden Administration of “targeting Floridians” in a manner he feels could “cost Floridians their lives.”

“DeSantis says ‘Yes, get Vaccinated’ for COVID” by The Floridian’s Javier Manjarres

“Anthony Sabatini Attacks ‘RINO’ Speaker Sprowls, Pushes ‘Open Carry’ by The Floridian’s Jim McCool—Although the Republicans may have a solid majority in both the state House and Senate, infighting still occurs. Rising star GOP figure, State Rep. Anthony Sabatini (R-32), has had some choice things to say about the Republican establishment over the years and now Sabatini is attacking Speaker Sprowls (R-65), calling him a “RINO.”

“Islamic Terrorist Attack on the U.S. is ‘Inevitable’” by The Floridian’s Javier Manjarres

Roger Stone: ‘Don’t Underestimate Nikki Fried’ by The Floridian’s Jim McCool—While the 2022 election will more or less serve as a referendum of the Democratic-controlled U.S. House of Representatives and U.S. Senate , local elections are just as important, if not more so. One race of particular importance this cycle is the Florida gubernatorial race where Democrats will try to unseat Governor DeSantis (R-FL). But first, Democrats must get through a polarizing midterm which veteran GOP strategist Roger Stone thinks will go to Commissioner of Agriculture Nikki Fried (D-FL).

“Audrey Henson of Pinellas County Runs for Congress” by The Floridian’s Jim McCool—Local businesswoman, nonprofit founder, and conservative Audrey Henson today launched her campaign for Florida’s 13th Congressional District. Henson is a Florida native and grew up in St. Petersburg. Henson is now running for the 13th US Congressional district in the South Florida community.

“DeSantis Filing ‘Emergency Motion’ After Enduring Another Mask Mandate Political Blow” by The Floridian’s Daniel Molina—Florida Governor Ron DeSantis (R) has received another political blow as Circuit Court Judge John C. Cooper ruled in favor of mask mandates, removing the automatic stay measure from the previous order. In response, the DeSantis Administration announced that it would be filing an “emergency motion to reinstate the stay.”