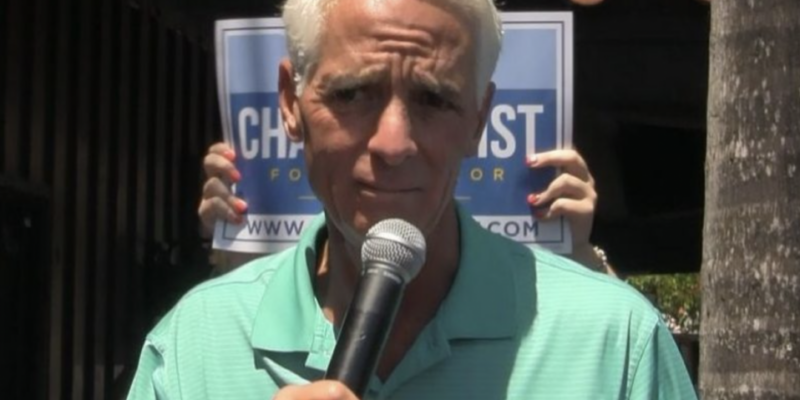 The Case of the Deleted Sympathizing Tweet About Fidel Castro

Some will say that Charlie Crist’s pick for Lt. Governor was ill-advised, while some will say it was a really dumb political move to tap a Progressive who tweeted a sympathetic pro-Castro tweet several years ago, and posed for a picture with a child molester.

But that’s exactly what Crist did when he named Karl Hernandez-Mats as his running mate.

Now, that infamous tweet about Fidel Castro has been deleted.

Meanwhile, Florida Democrats have yet to criticize, or even question Hernandez-Marts’s questionable sympathizes. READ MORE

Florida Democrats like Rep. Anna Eskamani are accusing Republicans of sanitizing their campaign websites from any anti-Abortion mention.

“I couldn’t help but wonder, how many Republican politicians will scrub their websites to hide from their abortion banning position,” stated Rep. Eskamani.

Rep. Nick DiCeglie, who is running for the State Senate, appears to be the first Republican to be accused of deleting hi “extremist pro-life views” from his website.

According to Rep. DiCeglie’s website, any mention of a pro-life position either did not exist or was taken down, as Democrats claim.

Democrats are hanging their hats on abortion being the winning issue for them this election cycle.

Rep. Val Demings, who is running for the U.S. Senate against Senator Marco Rubio, recently said that she was running on the abortion issue and that the current state of inflation needed to be tucked away from the political discourse.

"What we're seeing with the price of goods and services, gas at the pump, of course, people are feeling that every day, but lets kind of tuck this away," said Rep. Demings. READ MORE

Shevrin “Shev” Jones-When we ORGANIZE, WE WIN!! I was proud to stand w/ members of @SoFloAFLCIO, @MayorDaniella, @CommishEileen & other local leaders on this Labor Day, to amplify the message that unions are the bedrock of a just economy. Freedom includes the RIGHT to organize & unionize! #LaborDay

Karla Hernández-DeSantis is removing elected officials and arresting voters. These abuses of power are familiar to us who have seen what happens in Cuba, Venezuela and Nicaragua.

Like Castro, Ron is moving our state closer to authoritarian rule. Charlie and I will stop this wannabe dictator.

Charlie Crist-The reason why DeSantis remains silent on whether he’ll ban abortion is because his stance is unpopular. Since he’s got no spine, I’ll say it for him: DeSantis WILL ban your right to reproductive freedom.

That’s exactly why I plan to defeat him this November.

Debbie Wasserman Schultz-I joined @CharlieCrist and @KarlaforFlorida to talk to Venezuelan leaders about critical community issues. They understand why DeSantis is wrong for Florida and why a Gov. Crist will work for all Floridians.

Ron DeSantis-This Labor Day, I am glad Florida protected the right of all Floridians to earn a living when many other states did not.

Florida has more people employed than prior to the pandemic!

"Rubio Says he's 'the Most Effective Senator in Washington'" by The Floridian's Daniel Molina—Over the weekend, Florida Senator Marco Rubio (R) took part in an interview with NBC 6 Impact with Jackie Nespral. During the interview, Nespral and Sen. Rubio discussed the upcoming midterm election. Commenting on a number of topics including President Joe Biden’s student loan bailout and Florida Rep. Val Demings (D), Rubio called himself "the most effective Senator in Washington."

"Team DeSantis Slams Biden’s Record in Office" by The Floridian's Daniel Molina— Team DeSantis continues to direct its fury on President Joe Biden (D) with remarks about his record in office. Gov. Ron DeSantis, who is facing Rep. Charlie Crist in the upcoming midterm election, has also maintained a rivalry with the President. In a message to supporters, the Governor’s team reiterated comments from DeSantis, slamming President Biden's record in office while also calling him “the American Nero.”

"DeSantis Revolutionizes School Boards Across Florida" by The Floridian's Jim McCool—While Republicans are expected to make significant gains during the 2022 midterm election cycle over Democrats, the most significant elections in Florida are going almost unnoticed. Last month, Gov. DeSantis and Florida Republicans managed to revolutionize school boards across Florida, which will set a new standard in school policymaking.

"Artemis 1 moon mission twice postponed while VP Harris lauds it as a "test of pure innovation" by The Floridian's Mateo Guillamont—NASA’s latest space-exploration mission is postponed once again after VP Kamala Harris commended the Artemis 1 operation earlier this week. The $4.1 billion dollar operation is raising eyebrows as it nears a one-week delay from its original launch date.

"DeSantis Says Democrats 'Hate you' by The Floridian's Daniel Molina—Although Florida Governor Ron DeSantis (R) has led in all of the 2022 gubernatorial public opinion polls, a new survey indicates that Florida Rep. Charlie Crist's (D) campaign might be picking up steam.

"Eskamani Calls out DeSantis After Local GOP Official's Guilty Verdict" by The Floridian's Daniel Molina—Election Integrity in Florida is making headlines once again, but the accusation isn’t being directed at Democrats. Seminole County GOP Chairman Ben Paris has been found guilty of a misdemeanor charge.

"Donalds, Gaetz Sign Bill Questioning Meta CEO Zuckerberg over 2020 Election; Hunter Biden Story" by The Floridian's Jackson Bakich—Republican House lawmakers, including those on the Oversight and Judiciary Committee, penned and signed a letter to CEO of Meta (Facebook and its other apps) Mark Zuckerberg, questioning his company’s role in the suppression of the Hunter Biden laptop story days before the 2020 Presidential election.

"Rick Scott Introduces Bipartisan TICKER Act" by The Floridian's Jackson Bakich—In an effort to be more transparent with the American people and to secure confidence in their investments, Sen. Rick Scott (R-FL) and Sen. Chris Van Hollen (D-MD) have both reached across the aisle to introduce the Trading and Investing with Clear Knowledge and Expectations about Risk (TICKER) Act. The bill is designed so that the Securities and Exchange Commission (SEC) has to make recommendations about possible risky investments in Variable Interest Entities (VIE), especially if those entities are connected to China.

"Charlie Crist’s Attacks Against 'Fascist' DeSantis and Supporters Continues" by The Floridian's Mateo Guillamont—Rep. Charlie Crist has again made intense personal attacks against Governor Ron DeSantis and his supporters, continuing an onslaught that began with his victory in the Democrat gubernatorial primary and has remained til today. Through a tweet on Wednesday night, Crist described Gov. DeSantis as only caring for Floridians who support his “hateful” and “far-right extremist” agenda.

"Crist Resigns from House; Focuses on Gubernatorial Campaign" by The Floridian's Jackson Bakich— On Wednesday, August 31st, Rep. Charlie Crist (D-FL) announced his resignation from his seat in Florida’s 13th Congressional District, effective immediately. The “Staff for the Office of the 13th Congressional District of Florida” will continue to supply services for constituents up until January when the new candidate is sworn-in next year. This move will allow Crist to focus on the gubernatorial race against incumbent Gov. Ron DeSantis (R-FL).

"Kat Cammack Signs Letter Condemning Biden Admin for Afghanistan Withdrawal" by The Floridian's Jackson Bakich—As the United States reckons with the recent 1-year anniversary of the botched withdrawal from Afghanistan, many Republicans have called out President Joe Biden (D) for his lack of acknowledgement of the event in which 13 U.S. Service Members lost their lives. Rep. Kat Cammack (R-FL) was not the first to condemn the President’s failure to take responsibility for the evacuation, but she and her colleagues in the House of Representatives will almost certainly not be the last.

"DeSantis Team Slams Biden & 'Henchman' Crist" by The Floridian's Daniel Molina—After reports circulated regarding a local Florida Republican Party HQ being defaced, Republicans directed criticism at President Joe Biden (D). Recent comments by the President and gubernatorial candidate Charlie Crist (D) have been deemed controversial, accusing the GOP of being "semi-fascist." In a message to supporters, Team DeSantis slamming the president and "his henchman Charlie Crist."

"Secret Overnight Flights From Mexico Land in Greensboro" by The Floridian's Michelle Rosenberg—Apparent secret flights have landed in Greensboro, N.C. in the weeks following the Biden Administration's announcement that illegal migrants will be housed at the former American Hebrew Academy.

"DeSantis Sues FDA Over Drug Importation Records" by News Service of Florida—TALLAHASSEE — Gov. Ron DeSantis’ administration has filed a lawsuit alleging that the U.S. Food and Drug Administration has not complied with a public-records request about the state’s proposed program to import cheaper prescription drugs from Canada.

"Casey DeSantis Announces the 'Pathway to Purpose' Initiative," by The Floridian's Jackson Bakich—First Lady of the state of Florida Casey DeSantis officially announced the amplification of her Hope Florida – A Pathway to Purpose, which is intended to target the elderly community with support and increased assistance for those in need.

"Mast Says Biden's Inflation Reduction Act will End Up 'Screwing the American People'" by The Floridian's Jackson Bakich—Since the passing and the signage of the Inflation Reduction Act (IRA), politicians on both side of the aisle have predicted vastly different outcomes. For instance, Rep. Brian Mast (R-FL) has been very vocal about his disdain for the bill and the negative side effects he believes the legislation will produce.

"Scott Calls on Republicans to Vote on Debt Cancellation Accountability Act," by The Floridian's Grayson Bakich—This past week, President Biden (D) announced a new initiative to cancel billions of dollars of student loan debt. This will only increase the tax burden on working-class Americans. Sen. Rick Scott (R-FL) is at the forefront in fighting this plan. On Tuesday, Scott heightened his calls for fellow Republicans to vote for the Debt Cancellation Accountability Act.

"Steube: When Democrats Can't Win on Policy, They Resort to Name Calling," by The Floridian's Grayson Bakich—Maybe it's just to gin up voters for midterms, but there seems to be a trend line of Democrats antagonizing Republicans. From President Biden's "semi-fascist" remark to New York Governor Kathy Hochul's demand for Republicans in her state go to Florida, to Florida's own Charlie Crist saying Ron DeSantis (R) supporters have "hate in their hearts."

"Sanders Surges in Presidential Poll," by The Floridian's Daniel Molina

"Local Florida Republican Party HQ Vandalized by Anarchists," by The Floridian's Jackson Bakich—A few months ago, the United States saw a spike in vandalism against pro-life facilities such as crisis pregnancy centers after the leaked Supreme Court decision overturning Roe v. Wade. Now, there has been an episode of vandalism in Seminole County, Florida, at the Seminole County GOP office, just days after President Joe Biden (D) called the ‘MAGA,’ pro-Trump Republicans ‘Semi-fascists’ at a fundraiser.

"Crist Says Biden Was Being "Honest" on "Semi-Fascist" Remark," by The Floridian's Grayson Bakich—Barely a week after winning the Democratic primary for Governor, Charlie Crist (D) continues to alienate Floridians. As we have covered, Crist called Ron DeSantis (R) a fascist whose supporters have "hate in their hearts" and does not want their vote. Saturday, Rep Crist picked Karla Hernandez-Mats, an apparent Fidel Castro...