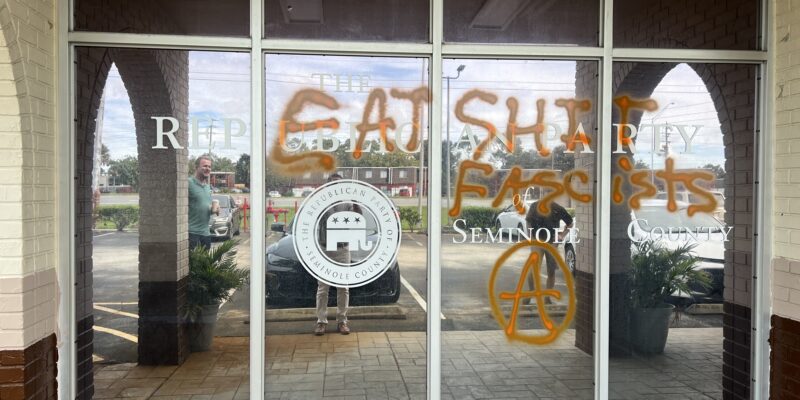 A few months ago, the United States saw a spike in vandalism against pro-life facilities such as crisis pregnancy centers after the leaked Supreme Court decision overturning Roe v. Wade. Now, there has been an episode of vandalism in Seminole County, Florida, at the Seminole County GOP office, just days after President Joe Biden (D) called the ‘MAGA,’ pro-Trump Republicans ‘Semi-fascists’ at a fundraiser.

The vandalism spray painted on the glass of the Seminole County RNC office reads “EAT SHIT FASCISTS” and includes a capital A with a circle around it, commonly known as an anarchy emblem.

“Biden and Democrats promised to ‘unite’ our country, but that was just another blatant lie from the radical left. Republicans will not be silenced by cowards – harmful rhetoric and disgusting acts like this will only make us work harder to propel Republicans to victory come November.”

Earlier on Monday, Rep. Charlie Crist (D-FL) when asked about the President’s comment which called millions of people semi-fascists, said that “Listen, he’s got to express and be honest about what he feels in his heart and in his soul. And I think that’s probably exactly what he did.”

Congressman Byron Donalds (R-FL) called Crist a “Chameleon” and reminded the former governor that he has lost a statewide election as a Republican, Democrat, and as anIndependent.

Republican congressional nominee Cory Mills, who is all but assured he will represent Seminole and Volusia Counties in the U.S. House of Representatives, responded to The Floridian's request for comment about the vandalism.

Mills, who recently crushed an 8-person field of Republican congressional candidates, warned that this vandalism was only the tip of the iceberg if Americans continued to vote in Democrats to elected office.

"The Left has continued to promote and advocate violence and vandalism in America. This is just a prelude of what will happen if Americans do not flip the Democratic-controlled U.S. Congress in the November elections.
This is the type of increased criminality, soft on crime policies, and vandalism that is occurring in New York and California, and if Floridian’s continue to vote for Democrats, then we can expect a lot more of this and much worse.”," stated Mills.

Chameleon @CharlieCrist holds the rare distinction of losing statewide as a Republican, Democrat, and Independent, and Floridians will hand him another L this November.

FL is now home to MAGA and DeSantis-loving Americans who want lower taxes, choice in education, and FREEDOM. https://t.co/Kpvn5cYJ33

“Chameleon Charlie Crist holds the rare distinction of losing statewide as a Republican, Democrat, and Independent, and Floridians will hand him another L this November. FL is now home to MAGA and DeSantis-loving Americans who want lower taxes, choice in education, and FREEDOM.”

According to local Orlando news station WESH2, Crist stated that he does not want the support from those who already support the governor (Ron DeSantis – R), calling them people with “hate in [their] heart.”

“Those who support the governor should stay with him and vote for him and I don’t want your vote. If you have that hate in your heart, keep it there. I want the vote of the people of Florida who care about our state: good Democrats, good Independents, good Republicans. Unify with this ticket,” Crist said. “Those who are haters: you’re gonna go off in your own world.”