JUICE—Florida Gov. Ron DeSantis continues to hit back hard against the Associated Press over a story they called “a partisan hit piece.”

Appearing on Fox News last night, Gov. DeSantis shifted his weight onto the foot that was already firmly pressed against the AP’s neck. READ MORE

There is ‘Fake News’ and There are ‘Fake Reporters’—READ MORE

President ‘Sleepy’ Joe Biden could be on his last leg, or not “around much longer” as Rep. Byron Donalds contends. Donalds made the remark this past weekend at a fundraiser for a congressional Republican candidate in Broward County. READ MORE

To Mask Or Not to Mask…

More and more School Boards are deciding to defy Gov. Ron DeSantis no mask mandate executive order. It doesn’t seem to be a winning issue for Gov. DeSantis, but the governor continues to push forward with it.

Agriculture Commissioner Nikki Fried, who is vying or the chance to challenge DeSantis in the 2022 gubernatorial election, is reveling in the defiance.

“We stand with the students, parents, and teachers in Duval! We won’t allow Governor DeSantis to defund your schools. We’ve got your back,” tweeted Commissioner Fried

—Congressman Greg Steube....No. However, it is irresponsible to go on vacation while the Taliban takes over Afghanistan and puts thousands of Americans and Afghan allies in harm's way.

—Shevrin “Shev” Jones-The FDA has approved the vaccine. Now, there is no excuse. #GetVaccinated

—Rep. Allison Tant-For my friends and colleagues who were hesitant to get the vaccine because of FDA approval... It's approved. Now please go get your vaccination.

—AG Ashley Moody-Touching ceremony honoring the life of Officer Jason Raynor. As we continue to mourn the loss of this Florida hero, may we never forget his bravery and sacrifice in the face of evil.

—Rep. Val Demings-There's never been a better time to get vaccinated: the Pfizer vaccine is officially FDA approved. This final checkmark is a confirmation of what we already knew: the vaccine is tested, safe, and effective.I wrote to the FDA earlier this month calling for swift action on this.

"DeSantis Hits AP Hard on National TV Over Regeneron ‘Hit Piece’" by The Floridian's Javier Manjarres—Florida Gov. Ron DeSantis reiterated his position that the recent Associated Press (AP) story about one of his top donors investing in the Regeneron COVID treatment drug that the governor was promoting across the state, was nothing more than a “partisan hit piece.”

"DeSantis Directs Letter to AP Over ‘False Narrative’" by The Floridian's Daniel Molina—Last week, the Associated Press published an article titled “DeSantis top donor invests in COVID drug governor promotes.” The article drew criticism from Florida Governor Ron DeSantis (R) who argued that the article “discouraged readers from seeking life-saving treatment,” calling the article “a debunked political attack.” In response, the Florida Governor has directed a letter to Daisy Veerasingham, the president and CEO of the Associated Press, calling the article “a false narrative that will lead some to decline effective treatment for COVID infections.”

"Byron Donalds: Biden ‘Ain’t Going to be Around for Much Longer’ by The Floridian's Jim McCool—With overwhelming, and sometimes uncalled for banter against President Biden’s (D) health, many have speculated the oldest elected President may not be fit to finish his term.  US Senator Rick Scott (R-FL) has already posed such questions, and now US Rep. Byron Donalds (R-FL) is joining in on the concern for Biden’s health.

"Carla Spalding Kicks Off Congressional Campaign with Kim Klasik and Byron Donalds" by The Floridian's Javier Manjarres—Having lost her 2020 congressional race to Rep. Debbie Wasserman Schultz (D), Republican congressional candidate Carla Spalding is not sitting back and waiting for the redistricting process to possibly help redraw the lines in this predominantly Democratic district.

"Democratic Candidate McCormick Promises $1,000 to Voters in FL Special Election". by The Floridian's Javier Manjarres—When US Rep. Alcee Hastings’ (D-FL) passed away after a long-fought battle with Pancreatic cancer, a special election to fill his vacated congressional seat was set for January 11, 2021. While there are about a dozen Democratic candidates in the race, it looks like the race could center more around Sheila Cherfilus McCormick and her $1,000 per month promise to constituents, if she is voted in.

Federal Judge Blocks Biden Immigration Policy, DeSantis Responds" by The Floridian's Jim McCool—As the United States continues to be plagued with crises both domestic and foreign, the illegal immigration crisis along the U.S. southern border continues with no end in sight. Once again, Florida Governor Ron DeSantis (R-FL) is leading the charge on illegal immigration, supporting the decision of a federal judge who “blocked” the Biden Administrations’ new illegal immigrant arresting policy.

"Biden In 2010 Reportedly Said ‘F–K That’ Regarding U.S Obligation To Protect Afghans" by The Floridian's Mona Salama-President Joe Biden rejected the idea over a decade ago that the United States had any moral obligation to stay in Afghanistan, saying “F–k that” while urging for a swift withdrawal regardless of the consequences, according to a resurfaced report.

"Deutch Requests Biden Administration’s Afghanistan ‘Evacuation Efforts’" by The Floridian's Daniel Molina—As reports continue to document the shifting political landscape in Afghanistan, lawmakers in the United States calling for the Biden Administration to respond to the concerns. On Social Media, Florida Rep. Ted Deutch (D) released a statement, calling it “the Fall of Afghanistan.” Subsequently, Deutch joined his Congressional colleagues in directing a letter to President Joe Biden (D), “requesting needed information from the Admin on evacuation efforts” for Americans that are stuck in the country.

"Senator Scott Questions Biden’s Mental Capacity" by The Floridian's Javier Manjarres—Florida Senator Rick Scott has now questioned whether President Joe Biden is fit for office, joining other Florida Republicans like Reps. Greg Steube and Kat Cammack, who recently requested that the president take a cognitive test to see if he is fit to lead or discharge his duties as president.

"Congressional Lawmakers React To Afghanistan Chaos Following Biden’s ‘Botched’ Handling Of Troop Withdrawal" by The Floridian's Mona Salama—Congressional lawmakers weighed in on the chaotic developments in Afghanistan amid President Biden’s hastily and botched handling over the withdrawal of U.S. troops, with both sides of the aisle expressing anger, but divided in their criticism of the president’s execution that has led to the mayhem.

Possible Corruption at the Florida GOP Could Threaten DeSantis in 2022," by The Floridian's Javier Manjarres—The apparent corruption and cronyism at the top of the Florida GOP or the Republican Party of Florida run deep, and it points to one man as being the person ultimately responsible—Chairman Joe Gruters (pictured with Broward Republican officials).

"Wasserman Schultz Supports $3Trillion Pathway to Citizenship Effort in Senate" by The Floridian's Daniel Molina—Florida Rep. Debbie Wasserman Schultz (D) shared an NPR, interview segment discussing a plan from Democrats to provide “a path to citizenship in their budget framework.” The interview explored the option of a $3.5 trillion spending bill that would tackle immigration reform, and discussed the effort that includes “permanent residency for qualified immigrants in the bill through a process called budget reconciliation.” The Florida lawmaker praised “reconciliation,” calling it “essential” in the process to move forward.

"Liz Cheney: Trump Bears ‘Very Significant Responsibility’ For ‘Catastrophic’ Afghan Withdrawal" by The Floridian's Mona Salama—Rep. Liz Cheney (R-WY) blasted both Presidents Joe Biden and Donald Trump for the “catastrophic real-time” situation unfolding in Afghanistan following the Taliban takeover of the government Sunday, arguing that the bulk of the blame should be towards the former president who bears “significant responsibility” over the current Democrat botched handling of withdrawal of troops.

"Florida Democrats Quiet Over Afghanistan as Taliban Takes Over" by The Floridian's Javier Manjarres—With President Joe Biden having asserted that he takes full responsibility for the chaos, death, and human rights atrocities being committed by the Taliban after his decision to hastily pull U.S. troops out of Afghanistan, very few Florida Democrats are lending their support for the president’s “the buck stops with me” decision.

"Biden ‘Stands Squarely’ Behind Chaotic Withdrawal From Afghanistan" by The Floridian's Mona Salama—President Biden addressed the nation Monday on the Afghanistan crisis for the first time since the rapid collapse of the Afghan government amid the Taliban seizing power in Kabul, staunchly defending his hastily decision to withdraw U.S. troops from the country while blaming everyone besides himself for the chaos that unfolded over the last few days.

"Wasserman Schultz Calls Florida a ‘Do Not Travel’ State" by The Floridian's Jim McCool—As the mainstream media furthers their tirade of bad press on Governor Ron DeSantis (R-FL), criticisms of his job as governor have not only been tied to COVID-19 but now economics.  US Rep. Debbie Wasserman-Schultz (D-FL) has called Florida under DeSantis a “Do Not Travel” state.

"Rubio Says Biden Ignored His Afghanistan Pullout Warning" by The Floridian's Daniel Molina—The Taliban have taken control of the Afghan government, and both the President and Vice President of the country have fled. Subsequently, video footage showed Taliban members celebrating from inside the presidential palace in Kabul. With a number of people rushing to airports and their cars to flee the country, Florida Senator Marco Rubio (R) has taken to Twitter to criticize President Joe Biden (D) and his foreign policy.

"Democrats, World Leaders Turn on Biden for Afghanistan Debacle" by The Floridian's Jim McCool—Only 3 weeks after US troops were pulled from Afghanistan to hopefully end a 20-year war, the Taliban have officially seized control over the nation of Afghanistan, even pushing the Afghanistani President out of the country and turning over weapons, prisoners, and land. Now, former President Donald Trump, Democrats, and world leaders are blaming President Biden (D) for the Afganistan debacle.

‘No one should die.’ Tampa Bay doctors, nurses exhausted by COVID surge' by Tampa Bay Times' Christopher O'Donnell—LUTZ — The COVID-19 patients arrive with depressing frequency to the emergency room at St. Joseph’s Hospital North. The sickest have a similar complaint: “I can’t breathe. I feel like I’m drowning.” Everyone is assessed as soon as possible, but the community hospital has only 40 treatment rooms in its ER. Some patients are returned to the waiting room, where, even with an area divided off for those infected, they put others at risk.

"Florida Democrat’s Targeting of Chick-Fil-A Could Be Political Motivated" by The Floridian's Javier Manjarres—A recent story in the South Florida Sun-Sentinel about the traffic back up at the only Chick-Fil-A store in Fort Lauderdale was accurately written about the popular store’s congestion. The congestion in question occurs in the far-right northbound lane on US 1 just south of Oakland Park Blvd.

"White House Praises DeSantis, Says he’s ‘Following the Science” With COVID," by The Floridian's Javier Manjarres—There isn’t much love loss between Florida Governor Ron DeSantis and President Joe Biden, but the White House needs to be given credit for putting differences aside and commending Gov. DeSantis for his statewide efforts of “following the Science” as he continues to deploy more Monoclonal antibody treatments to those with COVID-19.

"Biden ‘Hamstringing our own Energy Sector’ by Texas Politics' Daniel Molina—This week, the Biden Administration called on OPEC and others “to increase oil production to alleviate rising gas prices felt across the nation.” In the statement, the Administration also discourages “oil and natural gas production in the United States.” The White House issued a warning that “higher gasoline costs, if left unchecked, risk harming the ongoing global recovery.” In response, Todd Staples, the President of the Texas Oil & Gas Association, slammed the Biden Administration, arguing that Biden is “hamstringing our own energy sector.” 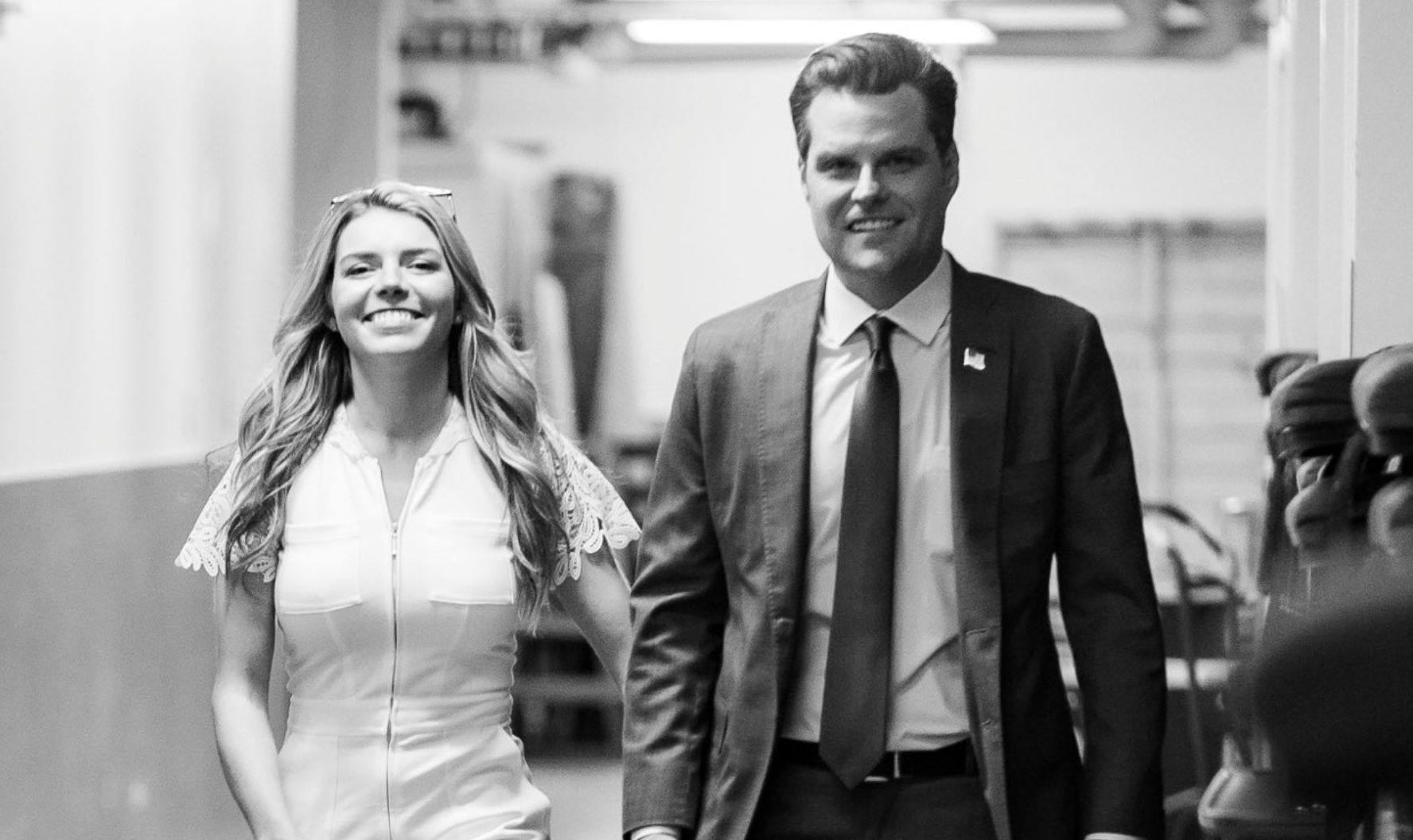