After 20 years, President Biden (D) decided to pull troops of Afghanistan bringing our troops home.  However, the Taliban now has control over more than two-thirds of Afghanistan.

This week, President Biden reassured the media that Afghanistan is ready to fight the Taliban on their own, claiming they have "300,000" troops to the Taliban's "75,000."  The Presidents numbers must be off, as the Taliban has not only seized multiple critical cities in the country such as Kandahar and Herat but also posing a serious threat to the US embassy.

Just after three weeks of making his heroic announcement of pulling troops, Biden has not only been forced into backtracking his commitment to pull out of the middle east but is practically begging the Taliban terrorist organization to spare the United States Embassy and the diplomats inside.

The New York Times reported that just three major cities in the country are still under the government’s control and Taliban fighters are "well-positioned to attack Kabul." The paper also pointed out that the capture of Kandahar is a symbolic victory for the Taliban because it is where the insurgency started back in the 1990s.

Fox News this week has just released a map on the Taliban's annexation of Afghanistan, showing a grim reality for the government and people of the middle eastern nation.  Black marks Taliban control, grey is government control and red is contested areas: 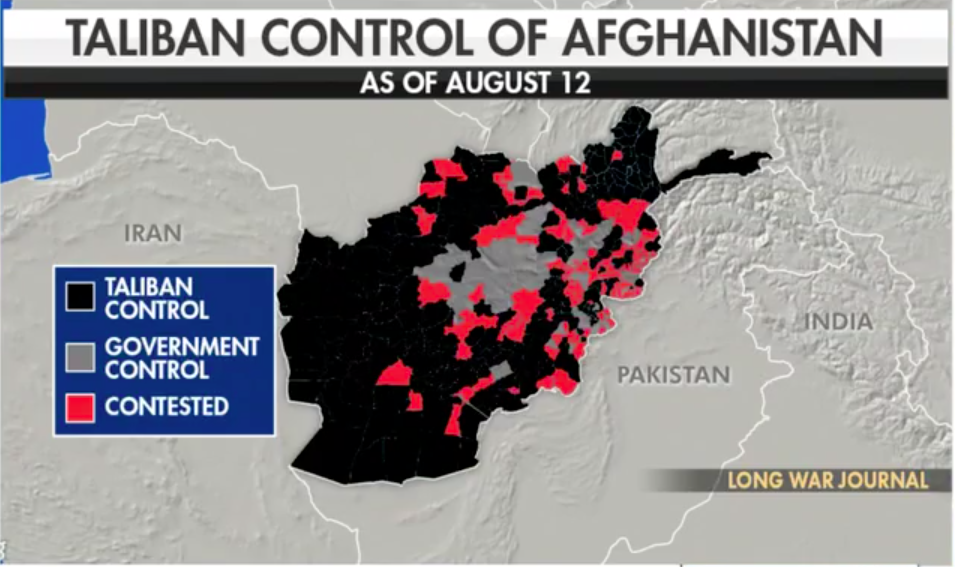 The rise of the Taliban is yet another major indication of rising tensions in the middle east since President Biden's inauguration.  The Israeli-Palestinian conflict early this Summer heated up causing Congressional "Squad" members to take sides with the terrorist organization, Hamas.  Hopefully, we do not see Rep. Ilhan Omar (D-MN) and Rep. Alexandria Ocasio-Cortez (D-NY) advocate for another designated terrorist group.

US Rep. Michael Waltz (R-FL) has blasted Biden previously for not properly pulling Afghan interpreters out of the region.  Now, these translators could be in actual danger with the embassy under threat, just as Waltz predicted.