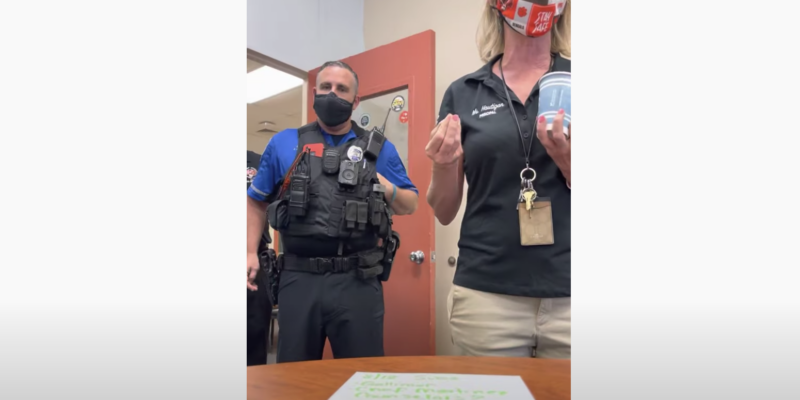 The embattled and Critical Race Theory-supporting Broward County School Board continues to defy Gov. Ron DeSantis's no-mask mandate executive order and is forcing students and teachers to wear masks to comply with the newly-written School Board rule, not with the governor’s edict.

On the first day of school, Piper High School Teacher John Alvarez was prevented from teaching and told to leave the school because he refused to wear a mask.

Using strong-arm intimidation tactics, Piper High School Principle Marie Hautigan and Vice Principle Kenneth Walton refused to speak with Alvarez at a scheduled meeting he had with school officials because he did not have a mask on.

Alvarez and his representative, Republican Congressional candidate Jason Mariner were greeted by Principle Hautigan, school security, and a member of the Sunrise Police Department and told to leave the campus.

Hautigan: Mr. Alvarez, you were given two options, one was to have a Teams meeting for your Due Process meeting, where you would not have to wear a mask or to follow School Board policy if you came on campus and wear a mask.

Alvarez responded by saying that he did not have access to the Teams system.

Hautigan: Then we will reschedule the meeting for later in the day,  make sure you have a laptop.

Hautigan: Without a mask, I cannot meet you sir and I will ask you to leave campus. As I mentioned to you yesterday, I am asking you to leave, so you will be paid for the day because I am telling you to go home. Do you have any questions?

In a posted video, Alvarez says that he has been teaching at the school for 8 to 9 years and that he was “just someone who is standing up” for his rights and “standing up against an inequity that is happening over here.”

Alvarez then said that all of a sudden, presumably to defy the executive order, school officials are now forcing him to wear a mask when they did not request or demand that of his last school year.

“I haven’t complied since they started all of this going on two years, and I haven’t had a problem with this until just recently,” said Alvarez.

Mariner, who is running in the special congressional election to replace former Rep. Alcee Hastings (D), called the School Board rule a “made up rule” and that they are “forcing a man to choose between his beliefs and his career.”

“Taking a made-up rule, going against Gov. DeSantis orders, and they are forcing a man to choose between his beliefs and his career it seems, he’s not been fire, we’ve not been trespassed,” said Mariner.

While school officials refused to speak to Alvarez and Mariner, Vice Principle Walton could be seen improperly wearing his mask.

Alvarez and Mariner also share images of other school teachers walking on campus without masks. School officials stated that teachers needed to comply with the school mask mandate of wearing a mask as they exit their vehicles and come on campus.