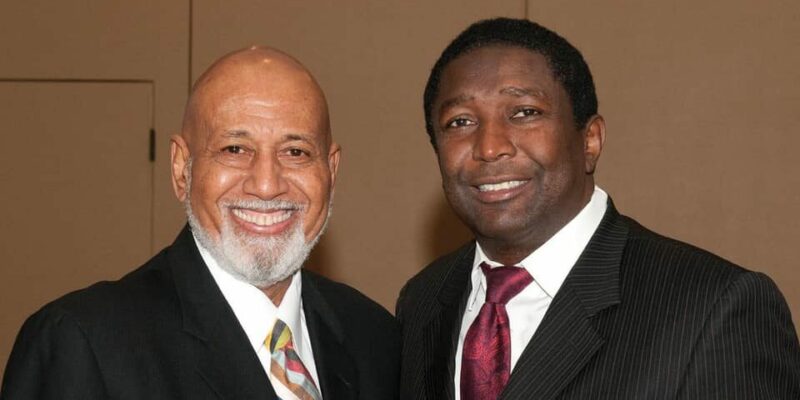 Broward County Commissioner Dale Holness could be considered the frontrunner in the special congressional election to replace the recently-deceased Rep. Alcee Hastings, who before passing away, groomed and then endorsed Commissioner Holness to take his place.

During a recent InterAmerican Institute for Democracy event in Coral Gables, Florida, Holness, who was invited to attend the event by the Ecuadorian government, told The Floridian that not only did Hastings encourage him to run, he told him he needed to run.

Holness  (pictured with Hastings) said that shortly before he passed, Hasting endorsed him and that his son was following his “father’s mandate” or wishes for him to support Holness’ congressional campaign,

Holness added that he wished the special election was “sooner” than the November 2 primary election date Gov. Ron DeSantis announced earlier in the week.

Democratic candidates vying to fill the big shoes left by the late Rep. Alcee Hastings now has a target date to campaign for.

Why is Dale Holness running?

According to Holness, who believes that more economic growth is needed in FL CD 20, says that the district “needs a voice” and is “one of the poorest” districts in the nation,” adding that the skills set that he brings to the race will help continue to empower Americans have been represented by Rep. Hastings.

“So look at what I’ve done,” said Holness. “When I came to Broward County, I helped boost small minority women-owned businesses, empowered the communities, and reduced the barriers for the business.”

“It’s building on work I have already done,” continued Holness

Holness sounds like a capitalist who is well-aware of the economic threat China poses to the U.S and believes that the U.S. “must engage in emerging markets” before the Chinese take over those respective markets.

The Democratic Field of Candidates

While Reps. Hardy, the self-styled “Troublemaker Extraordinaire,”  and Dubose are the louder, more controversial AOC-like candidates in the race, Holness and Thurston come off as the more even-keeled elder statesmen.

When talking about the all-important issue of “Social Justice,” Holness appears to cast shade on Hardy and others for their past rhetoric regarding social justice.

“Social justice is important, but you must first find a balance,” says Holness. “If I go there (Congress) and don’t have policies that are formulated to help the people, and I’m making a lot of noise, it’s not going to move the district further than it is now.”

Earlier this week, The Floridian posted a story about how billboards in support of Thurston that were paid by an outside group, were popping up all over the congressional district.

When asked to comment about the billboards, Holness stated with a big smile, “There might not be anything illegal about it, but it doesn’t look good.”

When the COVID-19 pandemic broke out in Florida, Holness, along with then-Miami-Dade Mayor Carlos Gimenez, were in charge of COVID relief operations in their respective counties —the two largest counties in the state.

Holness worked closely with both Republicans and Democrats, including Gov. DeSantis, “to bring resources to the people” of Broward County, and defends the governor’s actions while others have been “calling him names and doing all kinds of stuff.”

“Governance is not just running for office always, its about doing the things that are necessary to bring resources to the people you represent. Others were calling him names and doing all kinds of stuff, that’s not important for me to do in a crisis,” continued Holness. “What’s important is that I bring the resources to the people of Broward County. Hence, we had the first drive-thru testing site in the state, we had the first two walk-up sites in low-income communities in the state.”