U.S. Rep. Greg Steube fell at his home on Wednesday and is recovering nicely in the hospital, out of the ICU

While we still won’t go into detail as to what we know about his condition, we can say that there is still no shutting him up, not even a fall from the roof.

Here is what Team Steube is saying. Let them tell you. 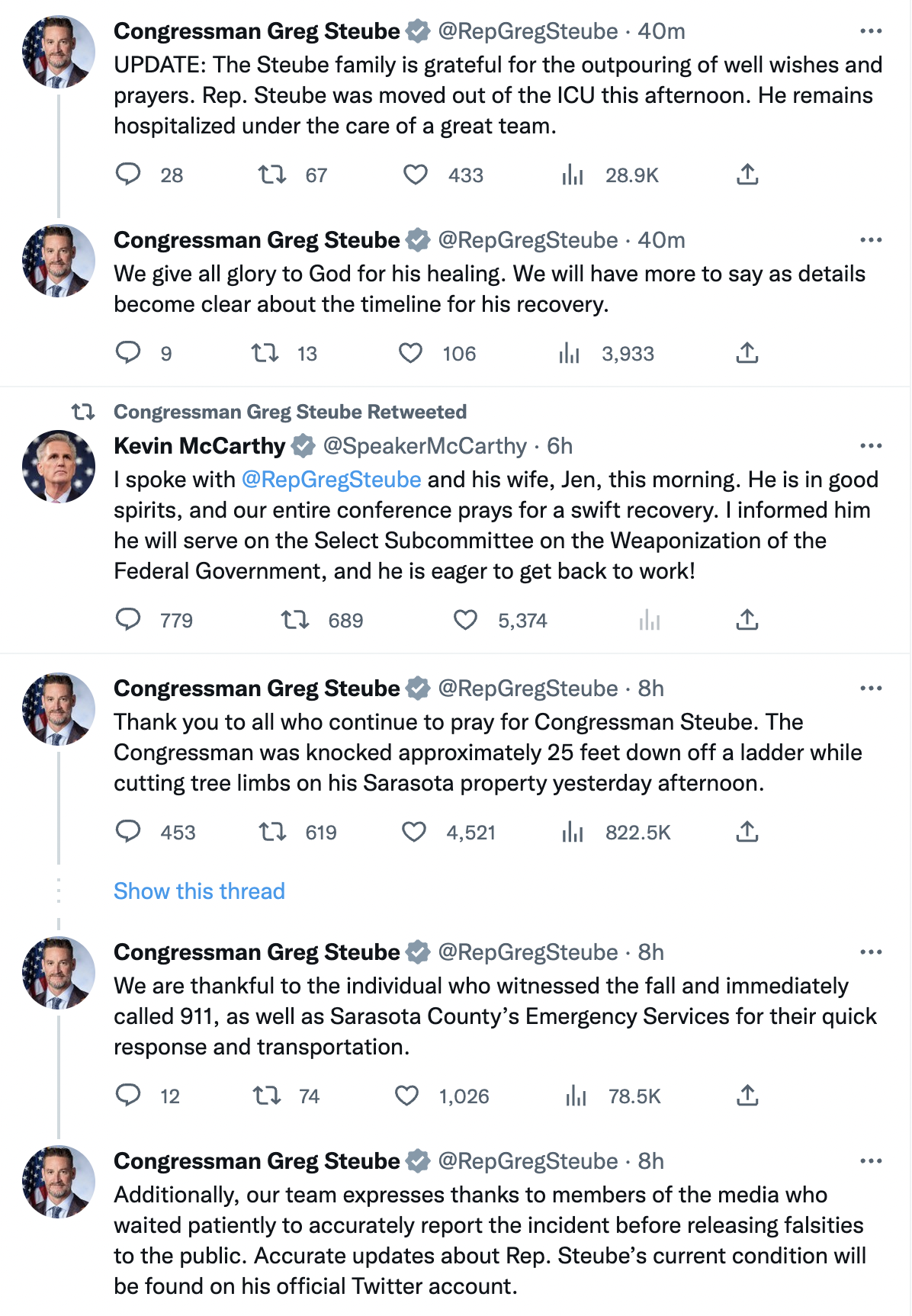 She is not crazy.

Taddeo, who ran for the House of Representatives and lost against Rep. Maria Elvira Salazar, has decided to make the run to lead the FDP.

“I’m ready. I’m ready to take up this challenge and do the hard work. I’m running for FDP chair,” said Taddeo in on social media.

It will be a very heavy lift for Taddeo to get her political party back on track, but there is hope from some Democrats that she will be able to right the ship sooner than everyone expects.

Republicans are also in the middle of picking their new leader.

State Senator an current Republican Party of Florida Chairman Joe Gruters is stepping away from the job, and now Republicans will choose between Vice Chairman Christian Ziegler, a Trump supporter, and RPOF Chair of Chairs, Evan Power, a staunch supporter of Gov. Ron DeSantis.

It’s Just not Happening in Florida

As Governor DeSantis has stated, “our classrooms will be a place for education, not indoctrination." READ MORE

State Rep. Angie Nixon-This man is planning to run for president of the United States. The fact that many people aren’t taking this seriously and sounding the alarm on how devastating he is currently and how much worse it will get is so frustrating. His team is smart and they dress up all their crap.

Michelle Salzman-Human trafficking is a serious problem for Florida. With open borders and being a peninsula it has become increasingly difficult to manage. I’m grateful for our AG @AGAshleyMoody & her efforts, as well as for the partnership and passion from Senator @GovGoneWild

Kat Cammack-Grateful for a positive update! Wishing my friend and colleague a speedy recovery.

Rep. John Rutherford-I am proud to cosponsor the FORCE Act which will prevent the Biden Administration from normalizing U.S. relations with the communist Cuban regime until the Cuban people regain control of their government.

Rep. Cory Mills-Honored to be on this esteemed committee. Under @RepMcCaul , we are going to hold the CCP accountable and strengthen America on the world stage.

"Waltz, Crenshaw Seek Military Force on Mexican Cartels" by The Floridian's Daniel Molina— Florida Rep. Mike Waltz (R) and Texas Rep. Dan Crenshaw (R) have collaborated to sponsor a bill that would authorize the use of Military force against Mexican cartels.

"Rep. Frederica Wilson Gives Viral Speech About Born Alive Abortion Bill" by The Floridian's Jackson Bakich—Yesterday, the Republican-controlled House of Representatives passed the Born Alive Abortion Survivors Protection Act, which was co-sponsored by Rep. Kat Cammack (R-FL). The goal of the piece of the legislation is to protect born babies that survive abortions.

"Brian Mast Introduces Vaccine Reenlistment Act" by The Floridian's Grayson Bakich—The COVID-19 vaccine mandate for the armed forces is officially dead. However, what will happen to approximately 8100 servicemembers discharged for refusing to comply? Rep. Brian Mast (R-FL-21) is introducing legislation to fully reinstate these members.

"Lee Calls for Full Government Transparency and Accountability" by The Floridian's Grayson Bakich—Florida Rep. Laurel Lee (R) has joined the chorus of Republican lawmakers who are calling for full transparency from President Joe Biden over the two batches of classified documents that were found at his old office near the University of Pennsylvania.

"Born-Alive Abortion Bill Passes in Republican-Controlled House" by The Floridian's Javier Manjarres—The controversial “Born-Alive” bill, or the “Born-Alive Abortion Survivors Protection Act, co-sponsored by Reps. Ann Wagner and Florida Rep. Kat Cammack, passed in the House of Representatives by a vote margin of 220-210.

"Donalds Selected to Serve on Financial Services Committee" by The Floridian's Jackson Bakich—On Wednesday, Rep. Byron Donalds (R-FL) was selected to serve on the U.S. House Committee on Financial Services. The Chairman of the Committee is Rep. Patrick McHenry (R-NC). Rep. Donalds appointment comes just days after receiving 20 votes for Speaker of the House in multiple rounds of voting. However, the job eventually was given to the current Speaker of the House Kevin McCarthy (R-CA).

"Mills Drafts Anti-Woke Publishing Bill to Protect Children from Being Sexualized" by The Floridian's Grayson. Bakich— He hasn’t even been sworn into office a week and former combat veteran, Rep. Cory Mills (R) has already drafted legislation that would prevent education publishing houses from printing and disseminating “woke” propaganda, specifically sexually explicit and pornographic material to children.

"FAA Grounds Flights, Florida Officials React" by The Floridian's Grayson. Bakich—The Federal Aviation Administration (FAA) has temporarily grounded all flights due to a system outage. This comes just over two weeks after Southwest Airlines had something similar happen, with millions of travelers stranded in airports. Naturally, the issue is trending on Twitter, and Florida representatives are speaking up.