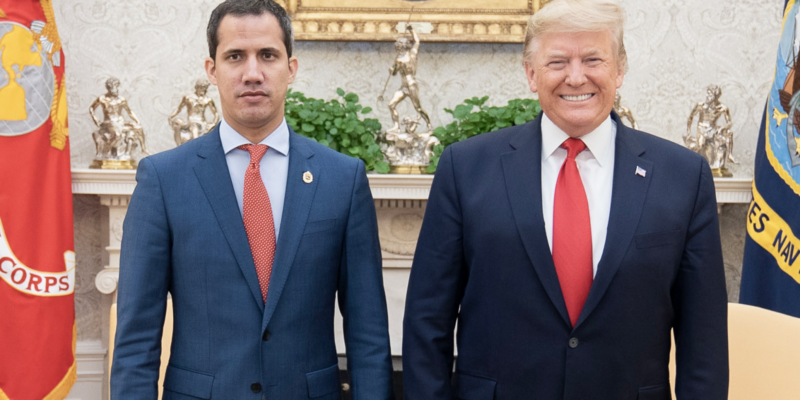 Big news yesterday regarding U.S.-Venezuela relations.  Just as news broke about Joe Biden’s presidential campaign advisor stating that if elected, Biden would betray the people of Venezuela by bowing down to Dictator Nicolas Maduro and not supporting Interim President Juan Guaido (pictured), the U.S. Chamber of Commerce released new research on the current and potential business outlook for American companies currently operating in Venezuela.

The survey concludes that the overwhelming majority of Venezuelan-Americans (80%) support U.S. companies to continue to operate in their native country, and believe that once Maduro is out of office, those existing U.S. companies will play a pivotal roll in resuscitating the almost non-existent economy that the Maduro regime has all but run into the ground.

That sentiment is shared by Venezuelan-Americans across political party lines, as individuals who either identify themselves as Republican, Independent, or Democrat, all support this belief that U.S. companies “are a force of good in Venezuela,” providing well-paying jobs, investing in the development of local communities, and supplying the immediate health and nutrition needs of the Venezuelan people by partnering with hospitals and relief organizations.

“In countries like Venezuela, American companies are often the most significant source of financial support to employees, employees’ families, and their communities,” said Neil Herrington, Senior Vice President of the Americas at the U.S. Chamber of Commerce. “Forcing U.S. companies out of Venezuela will not accelerate a return to democracy. It will only increase suffering and slow economic recovery while allowing America’s global competitors to fill the vacuum.”

In addition, the same percentage of those surveyed adamantly believe that it is critical for U.S. companies to maintain a foothold in Venezuela because of the existing threat that the new  “Axis of Evil,” which includes countries like Russia, China, and Iran, would ramp up their power and economic grab in the country.

The Chamber held a Zoom call with corporate, academic, and civil society leaders to discuss the future of U.S. businesses in Venezuela.

Amb. Thomas A. Shannon, Jr, Senior International Policy Advisor, Arnold & Porter, warned that “It would be daunting for the U.S. to step away from Venezuela now… they need us more than ever.”

Amb. Shannon also said that “In a country driven by deep political divides and impoverished by the scarcity of work, [the private sector] becomes a central component to the wellbeing of all Venezuela’s communities,” adding that in “the country in which many citizens feel abandoned by their political leaders” the “private sector emerges as a bridge between peoples both through the work it creates and through the community services it provides.”

Luis Felipe Carrillo, President, and CEO, Central Latin America (CALA) for GE, reminded event participants that General Electric has been working in Venezuela for a century.

“Yes, we’ve been in Venezuela for 100 years and of course it’s a difficult situation,” said Carrillo…” What we face right now is first, an infrastructure that is decaying significantly, which in the end provides the Venezuelan population with very little security in terms of energy,  in terms of health care services…. We are there for the long run, supporting our employees and our people.”

Carrillo also emphasized the importance of having engaged private sector partners for Venezuela’s reconstruction.  ”The transition to democracy eventually will lead to rebuilding infrastructure. We focus on sharing our knowledge with all relevant parties,” continued Carrillo… “We actively engage on what could be done with the highest impact and lowest cost to get Venezuela back on its feet.”

He also added that “business ethics will be important;  you need companies that shape the future of the Venezuelan ecosystem under a very strong value perspective.”

Cynthia Arnson, director for the Wilson Center Latin American program, warned of the difficulties that American companies face while working in an environment with no rule of law on the one hand, and on the other, with heavy sanctions imposed on them by their own government.  “U.S. companies still have the power, courage and tenacity to remain in Venezuela, with no rule of law… There is tremendous effort from [American] companies to continue navigating this environment…Things can be done to make it easier to support businesses and organizations that are doing so much in these dire circumstances.”