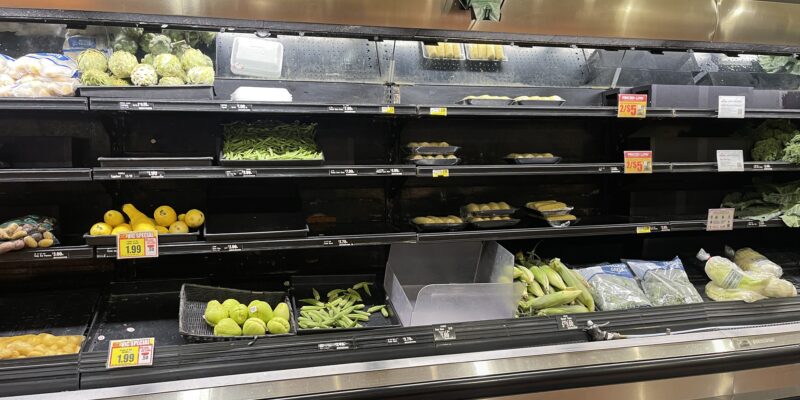 In late December 2021, President Joe Biden announced that the ongoing supply chain interruptions that resulted from the current rate of inflation the U.S. was enduring, stating, “Packages are moving, gifts are being delivered, shelves are not empty.”

Several weeks later, President Biden’s “shelves are not empty” remark has blown egg all over his face, and Americans are squarely blaming him for the food depletion.

In a recent Twitter video posted by combat veteran and Republican congressional candidate Cory Mills, Mills videos the inside the produce section at a local Whole Foods supermarket in Virginia to show the empty display case and the refrigerated shelves were.

Some shelves were completely bare.

Nothing to see here folks. No supply chain issues according to the Biden Admin. pic.twitter.com/xEXZNu4rp1

Mills points out that while “Pete Buttigieg and everyone one else is sitting on vacation and sitting in Delaware on the beach,” Americans are suffering food and supply shortages.

“This is what we have, empty shelves.  This is the Joe Biden America,” said Mills.

‘As a result of their failed foreign and economic policies, Americans have seen the price of gas skyrocket, and as a result of the “Biden inflation” that has gripped the nation, a compromised supply chain has contributed to the rise in the cost of labor, parts, vehicles, maintenance, and the price of bacon,” stated Mills in a recent op-ed he wrote.

The empty shelves are not unique to just Virginia. In Mill’s home state of Florida, empty shelves can be found in many Publix Supermarkets. While there are shortages in vegetables, the main shortages across all Publix’s are with paper products like toilet paper, paper towels, and paper napkins.

At a local Fort Lauderdale Publix, an obvious shortage of eggs was visible, as three of the 5 different egg sizes and containers were out of stock.

White House Press Secretary Jen Psaki recently stated that empty shelves were a “good thing” because it meant that supply was up.