The first Democratic primary gubernatorial poll in the 2022 Florida governor's race has been released and the data is very sobering.  While Governor Ron DeSantis (R-FL) continues to see a wide path to victory, the Democratic Primary could turn out to be quite the blood bath, and maybe all for nothing.

Victory Insights conducted a poll of 600 Floridians, in which they have attempted to get the earliest prediction on the governor race, and the numbers seem plausible so far.

Representative Charlie Crist (D-FL), who is the former governor of Florida, is the only declared candidate in the Democrat field but trails Gov. Ron DeSantis by a 53% to 47% margin. 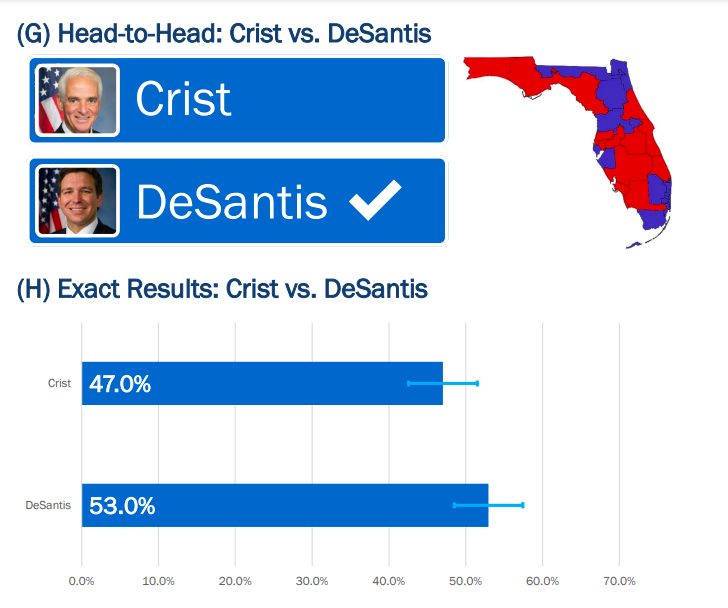 Considering that he is one of the most recognizable political figures in the state, Crist is considered to be the early favorite to win the  Democratic primary election.  Victory Insights projects that 53% of Democrat primary voters are in his corner, but a possible gubernatorial run announcement from Commissioner of Agriculture Nikki Fried (D-FL), could squander that.

Fried has been teasing a run for the governorship relentlessly on Twitter, and may oust Crist for not being, "Progressive," enough for the modern left-wing populous.

Commissioner Fried is the only Democrat to win a statewide election since 2012, and ever since then has become the face of the Florida Democrat Party, perfectly positioning herself for a gubernatorial run.  And it looks like she will, considering her relentless criticisms of DeSantis, such as comparing bills he signed to Jim Crow Laws and making vast corruption accusations.

Although Fried may be a better advocate of the Liberal agenda in Florida, the statistics still don't appear to be palatable for a Fried candidacy, as the poll has Governor DeSantis with a 92.5% chance of beating her, a less probable win than Crist as the nominee.

Fried may be better off remaining in her current cabinet seat, as she even places last in the current Democrat Primary field with only 17% support, right behind the dark horse candidate, Rep. Val Demings (D-FL).

Demings has not made any suggestions for us to suspect she could run for governor, but it seems that a lot of Democrats would approve of her candidacy. Remember, there is a reason why President Biden had her on his shortlist of possible Vice Presidential candidates.

Rep. Demings in a hypothetical primary race has the support of 30% of Florida Democrat voters, putting her in striking distance of the professional retail politician Crist.

And while Demings may be a more subtle figure in Florida politics, her lack of recognition compared to her opponents has left her with the best positive opinion rating.  Only 13% of voters have an unfavorable opinion of Demings, compared to Fried's 39%, and Crist at 41%.

However, with a 57% favorable opinion rating, and 49% of Florida making up his base, a DeSantis re-election looks more than probable.  We will likely see yet again, Democrats spending astronomical amounts of funds just to destroy each other in a highly-anticipated primary.  Democrats may not think Crist is Liberal enough, but his 9.7% chance of winning is the best bet Democrats can wager.