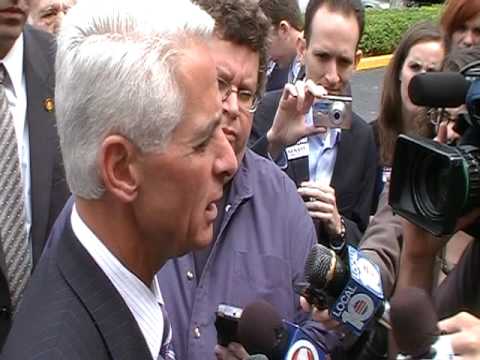 Speaking to ABC’s Ana Navarro on The View, Rep. Charlie Crist was questioned regarding his tendency to flip-flop on crucial, hot-button policy issues.

The segment began by criticizing Governor Ron DeSantis’ choice to remain in Florida and not come on the show.

Soon thereafter, however, Rep. Crist was given a ride down memory lane when Mrs. Navarro, a fierce critic of Governor Ron DeSantis, replayed one of Crists’ political ads from when he was running for Florida Governor in the early 2000s. The ad argued that “Floridians need a consistent, conservative governor that they can trust." Additionally, it assured Floridians that Crist believed in “pro-life, traditional marriage, and no amnesty for illegal immigrants”.

When confronted by Navarro on why he flipped on policy stances he endorsed in the past, Crist responded by pivoting to the Republican party and his belief that it has “changed”. Navarro persisted and again asked for Crist to explain to voters why they should trust him and not see him as a “political mercenary”.

#TheView's @ananavarro presses Fla. Democratic gubernatorial candidate @CharlieCrist on switching parties and his past conservative agenda: "I changed parties because my party changed. It started with the rise of the tea party back in '09 and 2010 and it really has metastasized." pic.twitter.com/hkt06P1EaC

Crist responded by emphatically asking Navarro to “judge him by his deeds” since, when he was Florida’s governor and had a conservative, pro-life platform, he instead opted to veto anti-abortion legislation that landed on his desk.

Crist was not asked if such an ideological inconsistency could not repeat itself, this time less favorably for liberals, were he to be elected governor. Yet, as reporters and tv hosts keep asking questions regarding his policy inconsistencies, it seems to be the question on everyone’s mind.

At one point of the show, Crist expressed his belief that he’ll be able to effectively govern with a republican-led legislature by “finding common ground and eventually growing some trust”. After more than three weeks of continuously demonizing  republican voters and legislators in Florida, Crist’s rhetoric, now seemingly suggesting an openness to cooperation, presents yet another switch in his political messaging.

When speaking about taxes, Crist promised on live TV to “never create a state income tax” if he’s elected governor. Yet some voters worry that this promise, just like those he made when he was a Republican, and later an independent, and finally a Democrat, will too, like Crist’s past political allegiances, untimely turn to dust.