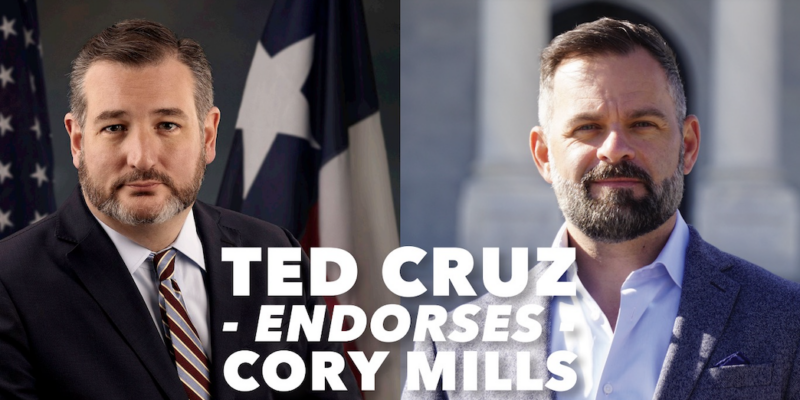 The Floridian confirmed the Mills endorsement with Sen. Cruz on the same day he endorsed Scotty Moore in Florida's 10th District.

According to Mills' campaign, Cruz becomes the 19th member of the U.S. Congress to endorse their congressional campaign, which comes "on the heels" of the poll The Floridian first reported on that had Mills leading State Rep. Anthony Sabatini by 9 percentage points.

The same story shows the results of a Republican Party of Florida (RPOF) poll that has Mills also leading Sabatini.

“I’m proud to endorse Cory Mills for Congress in Florida’s 7th Congressional District. Cory is a decorated combat veteran who will protect the Constitution and fight for our God-given liberties and freedoms in Congress. I hope my fellow conservatives will join me in supporting Cory’s campaign," stated Sen. Cruz.

“Senator Ted Cruz has been an ardent defender of the Constitution in the U.S. Senate. He has devoted his life to protecting our freedoms and liberties from being trampled by the Progressive Democrats that threaten to destroy our great nation," said Mills. "I am honored and humbled to have received Sen. Cruz’s full endorsement in our efforts to reclaim the U.S. Congress from the Democratic Socialists who threaten to destroy the very fabric of America.”

Even though he appears to have a sort of love/hate relationship with Rep. Alexandria Ocasio-Cortez, Cruz and Mills, alongside Florida Gov. Ron DeSantis have been targeted by the AOC-led Progressive "Squad" in the House of Representatives."

Mills will square off with 6 other Republican congressional candidates—Brady Duke, Rusty Roberts, Al Santos, Anthony Sabatini, Ericka Benfield, and Scott Sturgill— at a debate hosted by the RPOF at the Sunshine Summit in Hollywood, Florida on July 23rd.

Absentee ballots have already started hitting mailboxes around Florida. The primary election is on August 23.