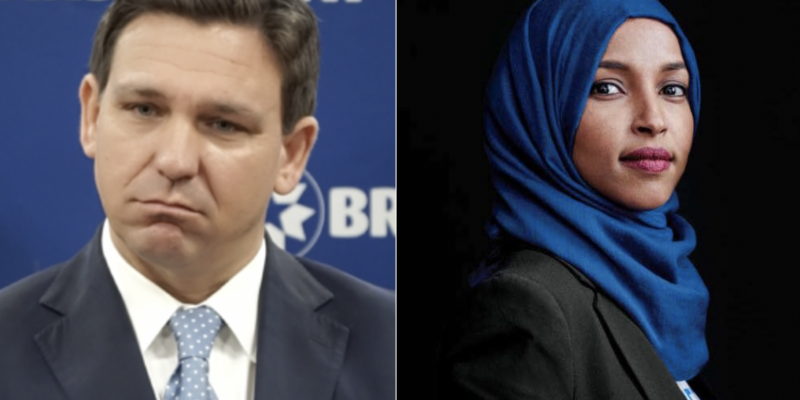 The Progressive “Squad” in the U.S. House of Representatives appear to have their sights focused on Florida, as Reps. Cory Bush, Ilhan Omar, and Alexandria Ocasio-Cortez have now targeted both Gov. Ron DeSantis and combat veteran and Republican congressional candidate Cory Mills.

Rep. Omar, who has been accused of making anti-Semitic and anti-Israel remarks in the past, took issue with Gov. DeSantis, tweeting that his new voter and election fraud police force would only serve to “intimidate, harass, and punish poor and Black voters.”

Rep. Omar’s remark was in response to an Associated Press story that highlighted Gov. DeSantis’s signing of the legislative measure that created the police force.

“Reminder that voter fraud is about as common as getting struck by lightning. As a force to investigate it, this police unit will be useless. As a force to intimidate, harass, and punish poor and Black voters, I'm sure they'll be very helpful,” tweeted Rep. Omar.

"Rep. Omar is making a dishonest straw man argument here, which is of course right in line with the leftist talking points on election integrity," Griffin said. "Fraud is the real voter suppression, because it invites undue, outside influence into the election process and jeopardizes the fundamental American assurance that everyone gets one equal vote," said DeSantis deputy press secretary Bryan Griffin to Fo News.

Omar’s jab at DeSantis is part of the ongoing political jousting between the Governor and members of the “Squad,” particularly Omar, who DeSantis recently singled out after being accused of not doing anything about neo-Nazis who protested on a highway overpass in Orlando earlier this year.

"I’m not going to have people try to smear me that belong to a political party that has elevated anti-Semites to the halls of Congress like Ilhan Omar, that have played footsie with the BDS [Boycott, Divestment, Sanctions] movement,” stated DeSantis back in February 2022.

But while DeSantis is a big and easy target for self-styled Democratic Socialists like the House Squad, Omar, “AOC” and the rest of the Squad have also focused on other Republicans they feel are a threat to their political ideology to their “social justice” agenda.

In early April, The Floridian reported that Reps. Ocasio-Cortez and Bush, both members of the House Oversight Committee, sent a letter to Cory Mills, owner of PACEM Solutions and staunch DeSantis supporter, demanding that he divulge any and all information about the chemicals his company uses to manufacture tear gas.

“Manufacturers have continued to profit off its sale, and law enforcement agencies have had free rein to use it against protesters across the country. This unregulated, violent, and deadly chemical weapon can cause long-lasting health damage to community members, including asthma, respiratory failure, and even death,” said Bush. “That’s why I’ve been working closely with the Oversight Committee & Chairwoman Maloney to get answers from Mr. Mills and PACEM on what specific steps they plan to take to get this weapon of war off our streets.”

“I am concerned about the widespread domestic use of tear gas as a riot-control agent.  This is a product that has been banned from use in war as a chemical weapon and that no federal agency has ever determined to be safe to use on humans, and yet we allow companies like PACEM to manufacture and sell tear gas products for widespread use,” stated Krishnamoorthi.

Reminder that voter fraud is about as common as getting struck by lightning.

As a force to investigate it, this police unit will be useless.

As a force to intimidate, harass, and punish poor and Black voters, I'm sure they'll be very helpful. https://t.co/1Je9Z8Dxpn

The Floridian spoke to Rep. Ilhan Omar and other members of the “Squad” this week, where she concurred with Rep. Bush about questioning Mills and his company. Omar added that tear gas should be banned because of the “immediate and dangerous impact,” not to mention the “lasting effects” that it could have on Americans that have been exposed to it.

“It has an immediate and dangerous impact on people who are practicing their First Amendment rights in our country, because to decent is protected by the First Amendment,” said Omar.

“I have always supported ALL Law Enforcement, including correctional officers, and will continue to do so. We support funding the police, not defunding them, as well as our brave servicemen and women of the Armed Forces,” said Mills in a statement to The Floridian.

In direct response to the Oversight Committee letter penned by Reps. Bush and Ocasio-Cortez, and to Rep. Omar’s comments, Mills stated the following:

Our company was proud to support law enforcement officers during the 2020 riots and help supply them with less lethal equipment to quell the violence against innocent citizens, looting of businesses, and vandalism of homes.

Products like tear gas are sanctioned and utilized by the Department of Defense and state and federal health departments. They are used on a daily basis to train our military personnel and LEO’s. Each officer or military member, who utilizes these irritants, must experience these irritants prior to certification.

I for one, am thankful that our officers have less lethal options available to ensure order and preserve lives.”

Mills, who is running for Congress to replace Rep. Stephanie Murphy (D) in FL CD 7, continued, praising DeSantis for taking the lead against “woke” Progressives like Ocasio-Cortez, Omar, and Bush, who he says are part of the “groomer culture” that possess a direct threat to children and the American way of life.

“Gov. DeSantis has strapped on the flak jacket for all Americans and has single-handily taken on the “Woke” Progressive “groomer culture” that “The Squad” wants to see indoctrinate our children with perverse school instruction, defund the police, and steal away our elections. We need to continue to support the governor’s Florida First, Family First agenda that is keeping Florida the “freest state,” stated Mills in response to our request for comment.

Could the Progressive Squad be looking to play in Florida's midterm election?