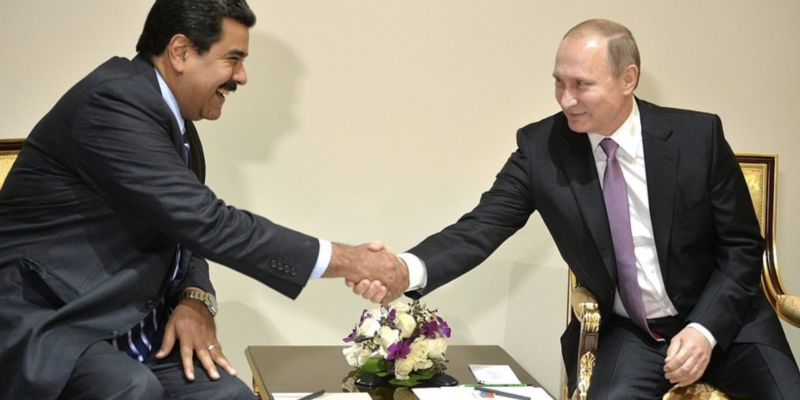 While world leaders fear that Russia’s invasion of Ukraine could be just the beginning of a broader military incursion into Eastern Europe, President Vladimir Putin’s next big hostile move could be against the U.S. through Latin America, with his heavy and growing military footprint inside Socialist Venezuela.

Russian threat to the Western Hemisphere has been budding for years but appears to be increasing, say U.S. lawmakers and key experts on Venezuela, and those who closely work within the friendly and unfriendly confines of Latin America.

U.S. Southern Command analyst and freelance journalist Maria Zupello recently warned that Moscow’s violation of Ukrainian sovereignty “raises urgent questions regarding the nature of Russia’s presence and influence in Latin America. The recent escalation in Europe will likely amplify Russian President Vladimir Putin’s hybrid warfare on geographically distant fronts, such as Latin America, in the following weeks and months. His message to the U.S. appears to be clear: if you interfere in my backyard, I will interfere in yours.”

Russia is already in our backyard, and Putin’s recent military investment in Cuba and Venezuela has raised alarms.

U.S.-imposed economic sanctions against the Maduro regime in Venezuela worked initially, but with the help of China, Russia, and Iran —the new axis of evil— those sanctions have become “counterproductive” and appear to be hurting the Venezuelan people more than they have challenged the Maduro government.

Herrington added that Russia indeed has broadened its “foothold” in the Western Hemisphere by filling energy voids left by Western companies.

“The latter has taken on even greater consequence in the wake of Russia’s unprovoked attack on Ukraine,” said Herrington. “When current sanctions policy has driven U.S. and allied energy producers from Venezuela, it has often been Moscow that has been happy to fill the production vacuum and simultaneously deepen its foothold in our Hemisphere. That should be cause for alarm for us all.”

How deep is Russia’s involvement in Venezuela?

News agency Reuters reported last week that, according to industry sources, Russia has an equity of approximately $4 billion and produced some 125,000 bpd of crude, amounting to about 16% of total Venezuelan production last month.

But aside from oil investments and military funding to Venezuela, Russia is trying to expand its MIR credit card system by offer its services to Maduro.

MIR credit cards run on Russia’s National Payment Card System, a homegrown system overseen by the Russian Central Bank, which runs the financial plumbing that underpins credit card transactions, even those with the Visa and MasterCard logos.  This system bypasses SWIFT. That’s why the domestic payment system has continued to run smoothly in Russia, even after mammoth financial sanctions were imposed.

Florida’s U.S. Senator Marco Rubio, whose life has been directly threatened by the Maduro regime, told The Floridian that President Putin’s presence, or “foothold” in the region, as Herrington pointed out, was merely to “threaten and intimidate the United States” and to try to put himself up on a pedestal in order to garner favor with world leaders.

“Moscow wants to continue expanding its presence in our region in order to threaten and intimidate the United States. Just like Xi Jingping, Vladimir Putin thinks that by courting our neighbors with false promises and making deals with dictators and anti-American governments in the hemisphere, the world will recognize him as the leader of a great power,” said Sen. Rubio, adding that, “It should surprise no one that a thug like Putin sees a friend in narco-dictator Nicolás Maduro.”

Sen. Rubio also believes that in order to “effectively combat” the Russian threat in Latin America, “the United States must continue to foster meaningful partnerships with nations in our hemisphere and stand firmly with our democratic allies, such as Colombia, Brazil, Ecuador, and Paraguay.”

Colombia, which continues to be perceived as one of the world’s largest producers of cocaine, appears to be in Russia’s global dominance crosshairs.

By having coastlines along the Pacific and the Carribbean oceans, having a friendly government and possibly being able to establish a greater footprint in South America, Colombia is seen as a big catch for Putin.

Colombia has an upcoming presidential election, and one of the candidates, Gustavo Petro, is a Marxist who appears to be supported by Nicolas Maduro himself, with help from the Russians.

Maduro has been tied to the drug trafficking and money laundering dealings of terrorist organizations ELN and the FARC.

Media outlets in the region have also reported that a Russian digital disinformation campaign has been launched to help Petro’s candidacy.

“Russian military training for anti-drug operations would allow Russian experts to access the region's intelligence and logistics networks, as well as U. S. counter-narcotics and counter-terrorism strategies and tactics that the latter has shared with regional governments,” added Zupello.

Another U.S. lawmaker, Rep. Michael Waltz, agrees that Russia continues to use “misinformation” to cause chaos and undermine world nations, including those Western Hemisphere countries like Colombia.

“Adversaries of the U.S., including Russia and Iran, continue to meddle in the Western Hemisphere in hopes of dividing U.S. partners in the region. Their continuous attempts to peddle misinformation come both in the form of online misinformation campaigns and state-sponsored media influence,” stated Rep. Waltz in a statement to The Floridian. “ The Biden Administration needs to utilize resources including the State Department’s Global Engagement Center to actively promote the democratic values and the benefits of partnerships in the U.S. to counter these campaigns.”

“We need to strengthen our relationships with our allies down in South America and Central America. We need to be much more aggressive in terms of making sure that we have influence in those countries here in our own hemisphere, we shouldn't be turning a blind eye to South American countries and letting Russia and/or China build these relationships,” said Rep. Byron in an interview with The Floridian in Washington, D.C.

We Will See Many More Venezuelas if China Wins