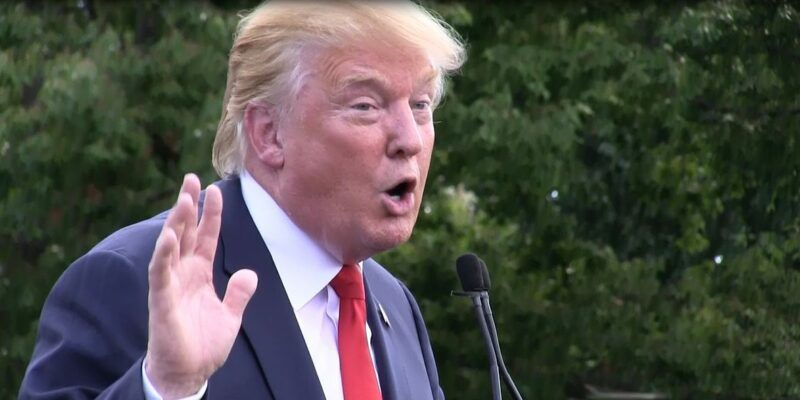 As the COVID-19 pandemic surges across the nation, President Donald Trump, who is against mandating Americans to wear masks,  says he is “all for masks” being worn to prevent the spread of the virus.

“I’m all for masks. I think masks are good”- President Trump

But even as the coronavirus’ spread climbs, conspiracy theorists have been pushing a dangerous and irresponsible narrative that masks cause disease and shouldn’t be worn. 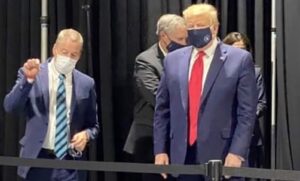 “Three months into the pandemic we now have enough data to say with a high degree of confidence that no one has died from wearing a face mask in public,” tweeted a sarcastic Senator Marco Rubio.

But as the overwhelming majority of healthcare providers believe that wearing a mask significantly reduces the chances of people contracting the virus, far too many people are believing those conspiratorial theories about masks.

One of those non-believers of the importance of wearing a mask is Republican congressional candidate Jessica “Jessi” Melton, who is running in a contested primary race in Florida’s 22nd congressional district.

Melton has garnered a significant social media following since the outbreak of the pandemic by tweeting out very questionable and controversial messages about the pandemic. Several of Melton’s tweets are considered irresponsible and dangerous. Melton has also been caught misrepresenting a letter she received after violating House Ethics rules.

One of those controversial tweets she posted that stated “excessive use of face masks causes fungal and bacterial pneumonia” was quickly debunked by scores of medical professionals around the nation, including Davidson Hamer, an infectious disease specialist at Boston University.

“There’s no evidence of masks leading to fungal or bacterial infections of the upper airway or the lower airway as in pneumonia,” said Hamer.

This message Melton put out stroked conspiracy theorists, but some of her other past tweets and Facebook postings were quickly removed either by herself or by Twitter.

Melton has also pushed back against people who don’t conform with her unproven pneumonia theory. In an exchange with an actual medical doctor, Melton appears to mock the individual by referring to her as “Miss medical professional.”

The doctor in question quickly responded, reminded the congressional candidate to address her as “Dr. Olson.” 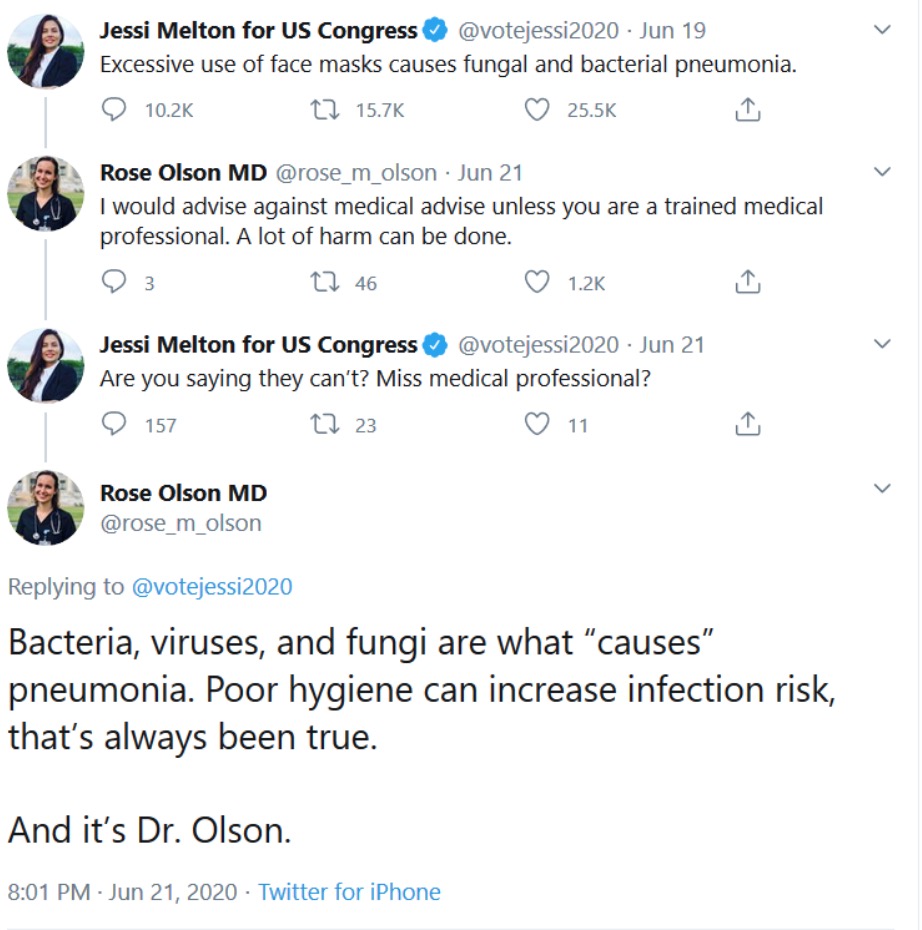 When the pandemic first broke out and President Trump shut down the country back in March, Americans were told to social distance and cover-up. These measures that were suggested by the Centers for Disease Control and Prevention (CDC) and by many respected health care officials and providers have proven to be effective.

Again, Trump shut down the country in March and hoped to reopen it by mid-April, so Americans were hunkered down at home and hoping to get to a “new normal” and were only allowed to go to “essential” businesses like grocery stores.

One of those “essential” businesses is Publix Supermarkets. On April 21, in the middle of the pandemic, Melton posted a video of her skateboarding inside of a grocery store with her dog. Melton propped up her camera, took her mask off, and captioned the video “wash your hands and don’t forget to live a little.”

Is this the action of a serious and mature congressional candidate?

Melton’s blatant disregard for the well-being of others, and disrespect for Publix Supermarkets, which requires that everyone entering one of their stores wear a mask, did not go unnoticed.

Because the mask issue has caused so much controversy, The Floridian spoke to Melton’s congressional opponents about their position on wearing masks.

Small businesswoman Darlene Swaffar agreed that Melton’s apparent political stunt at Publix was disrespectful, saying the because she believes that “nobody has the right” tell companies like Publix how to run their business, and because she does “love shopping at Publix,” that she does “follow the rules” the supermarket chain has put in place.

“I am going to respect their rules at their store,” said Swaffar.

Swaffar, who says she doesn’t believe in the use of masks, also said that because she works with seniors, her mother made masks so that she could offer them to her clients if they requested a mask.

Businesswoman Fran Flynn said that she doesn’t “believe the government should mandate masks,” and  “out of respect for fellow business owners and patrons, the public should comply with their wishes in order to reduce the spread of infection.”

Attorney James Pruden, who several activists believe could have the advantage in the race and also does not support “any form of government” mandate,  says that “folks in the area need to act responsibly,” and that those same folks needed to be “conscientious to the safety of others.”

“We need to preserve as much free choice as possible,” said Pruden, adding that “If you are going to be in tight quarters, you should wear a mask. If you don’t you should be around other people who are like-minded.” Pruden also dismissed Melton’s assertion that the use of masks caused disease,  calling it an untruth and saying that that argument has already been summarily dismissed.

Again, are Melton’s tweets and actions the mark of a mature and responsible congressional candidate?

The winner of the primary race in FL CD 22 well then face-off with incumbent Rep. Ted Deutch (D) in November. 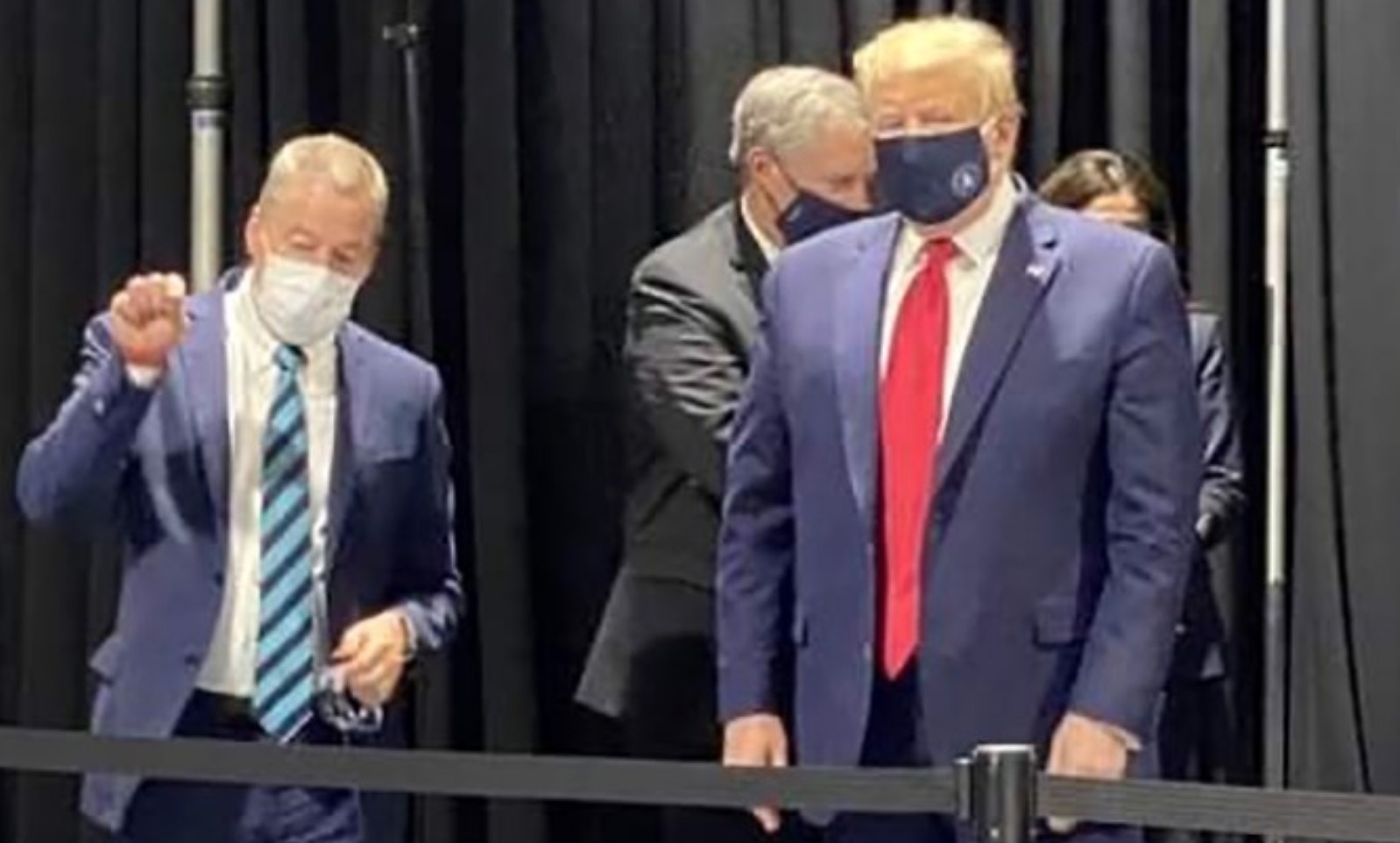