Rep. Debbie Mucarsel-Powell (D), who represents the majestic Florida Keys, recently penned an op-ed in the KeysWeekly newspaper addressing the need for Americans to accept climate change and for legislators to write legislation that specifically outlines “comprehensive ocean climate action” that begins with “addressing ocean acidification.”

Like Senator Marco Rubio (R), Rep. Mucarsel-Powell supports a moratorium on offshore oil drilling, a measure that Rubio's office says is more likely to pass than an all-out ban.

Rep. Mucarsel-Powell’s tweet of her op-ed mentioned the possibility that the Trump administration may look to drill off of Florida’s coast even though just about everyone in the state opposes offshore oil exploration.

“The Trump administration is threatening to drill off our coasts, But I'm fighting to protect our ocean because it’s the heart of our diverse, vibrant culture. The ocean is crucial to our state, from tourism to fishing. We have to protect it,” tweeted Mucarsel-Powell

But while the opinion is exceptionally informative and detailed, Mucarsel-Powell’s assertion that “communities of color” are affected by climate change than any other community, strikes a nerve with many non-believers.

“We must transition off of fossil fuels and towards a clean energy future to mitigate ocean acidification and combat the climate crisis. And, in every response to climate change, we must focus on protecting communities, especially communities of color, who disproportionately feel the effects of climate change, and those most vulnerable to sea-level rise and catastrophic storms. I’m proud to support efforts like rejoining the Paris Climate Agreement and offshore drilling moratoriums — but there is more we can do.”

The case can be made that poor communities, communities of all colors – white and black – feel the pain more when a natural disaster hits. We saw the destruction Hurricane Katrina left in the impoverished Black neighborhoods of New Orleans and what rising sea levels do to very affluent white neighborhoods in Miami and Fort Lauderdale.

While Mucarsel-Powell supports the Trump administration’s effort to rejoin the “Paris Climate Agreement,” chances are that will probably not happen without significant changes to the accord.

During a White House press conference in 2017, President Donald Trump announced the U.S. withdrawal from the Paris Climate Accord, saying that his administration “will start to negotiate” a better deal “that’s fair” for Americans.

I am fighting every day for the great people of this country.  Therefore, in order to fulfill my solemn duty to protect America and its citizens, the United States will withdraw from the Paris Climate Accord — but begin negotiations to reenter either the Paris Accord or a really entirely new transaction on terms that are fair to the United States, its businesses, its workers, its people, its taxpayers.  So we’re getting out.  But we will start to negotiate, and we will see if we can make a deal that’s fair.  And if we can, that’s great.  And if we can’t, that’s fine. 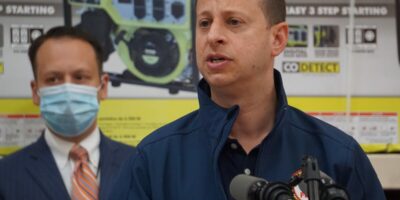