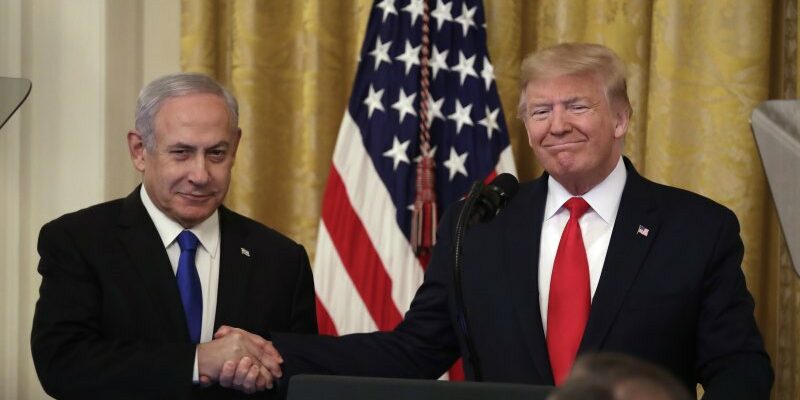 President Trump unveiled his long-awaited Middle East peace vision Tuesday, calling for the creation of an independent Palestine state with its capital in East Jerusalem, while recognizing Israeli sovereignty over West Bank settlements.

"My vision provides a win win solution for both sides," Trump said, standing alongside Israeli Prime Minister Benjamin Netanyahu in the East Room of the White House. "A realistic two-state solution that resolves the risk of Palestinian statehood to Israel's security. Crucially, the proposed transition to a two-state solution will prevent no incremental security risk to the state of Israel."

Dubbed by Trump as the "deal of the century," the plan calls for a two-state solution including the state of Israel and the "future" state of Palestine. It sets a number of benchmarks for Palestinians to reach in order to achieve statehood, including renouncing terrorism, acknowledging Jerusalem as the capital of Israel and halt the activities of militant groups Palestinian Islamic Jihad and Hamas.

The plan proposes a two-state solution where Israel would freeze new settlement construction for a period of four years, during which time a comprehensive agreement would be negotiated. It includes a proposal for a tunnel connecting the West Bank to Gaza.

"I want this deal to be a great deal for the Palestinians," Trump said. "Today's agreement is a historic opportunity for the Palestinians to finally achieve an independent state of their very own. We are asking the Palestinians to meet the challenges of peaceful coexistence. We will also work to create a contiguous territory within the future Palestinian state, for when the conditions for statehood are met, including the firm rejection of terrorism."

Trump made a direct appeal to Palestinian Authority President Mahmoud Abbas to engage with the plan, saying he sent a letter to the Palestinian leader.

He added, "This is a great deal and the Palestinians may not have this opportunity ever again."

The peace plan requires agreement and involvement from Palestinians, who have rejected the Trump administration's efforts to start any negotiations.

"They called me from Washington and I did not pick up the phone," Abbas said in a televised address in Ramallah in the Israeli-occupied West Bank. "I say to Trump and Netanyahu: Jerusalem is not for sale, all our rights are not for sale and are not for bargain. And your deal, the conspiracy, will not pass."

Abbas has vowed to reject any American peace plan and has said the Palestinians have recently cut off all contacts with the US, other than with American security officials as a part of their commitment "to fight terrorism."

Trump met with Netanyahu and his political opponent Benny Gantz on Monday with both endorsing and agreeing to implement the first steps, regardless of the outcome of the upcoming March 2 election. This is the first time Israel has agreed to a Palestinian state with defined borders.

Netanyahu praised Trump for achieving "the deal of the century," describing it as "a realistic path to a durable peace" that "strikes the right balance where others have failed." Calling Trump the best friend Israel has ever had in the White House, Netanyahu added: "It's a great plan for Israel. It's a great plan for peace."