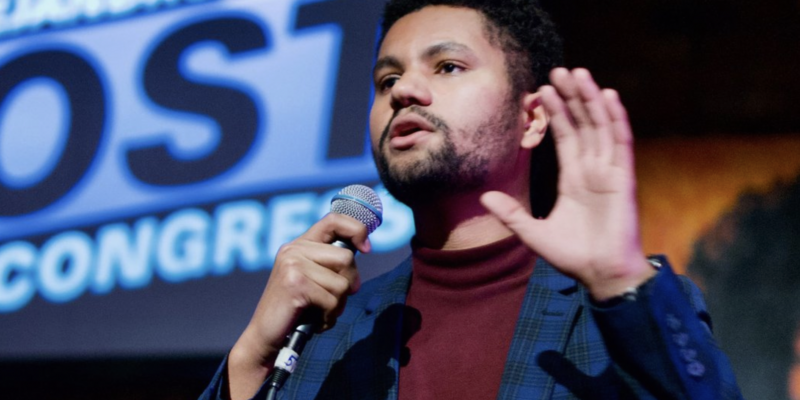 25-year-old Congressman-elect Maxwell Frost will continue taking up an anti-gun position in the upcoming Republican-controlled House of Representatives, which is to be expected considering his past position as one of the founders of the  March for our Lives movement. House Democrats will push for control and abortion.

March for our Lives was started by a group of high school kids after the Marjorie Stoneman Douglas High School shooting that left 17 innocent students and teachers dead. Just recently, Andrew Pollack, the father of Meadow Pollack, called Frost and the other organizers a bunch of “jerk-off kids,” accusing them of “accomplishing nothing” and just using the shooting for selfish reasons

“Those jerk-off kids that did that march. They went and accomplished nothing,” said Pollack.

During a recent interview on Meet the Press NOW, Frost called on Senate leadership to vote on the assault weapons ban the House passed earlier in the year.

Frost, is said to have become a political activist and the ripe age of 5 after the 2012 Sandy Hook Elementary School shooting.

“I think it’s important to put it up for a vote even if it doesn’t pass because it gets people on the record,” said Frost

Frost continued, citing the terrorist attack at the Pulse nightclub in Orlando, Florida as just another reason why assault weapons needed to be banned.

"Seeing what happened here in Orlando ... that same heartbreak came out in our city," Frost said. "My message to the country is this: we don't have to live this way."

On June 12, 2016, Omar Mateen, a radical Islamist who proclaimed his allegiance to ISIS on a 911 call that the FBI later published, planned and carried out a deadly attack at the Pulse nightclub, killing 49 innocent patrons.

Mateen was killed by police during the shooting.

To date, Frost and many other Democratic lawmakers, including Rep. Stephanie Murphy, or Orlando-area State Reps. Anna Eskamani and Carlos Guillermo Smith, have refused to call the Pulse mass shooting a terrorist attack, solely campaigning on the incident as being an act of gun violence against the gay community.

Mateen did target the nightclub because it was an establishment that catered to the gay community.

Frost continued, this time the young soon-to-be legislator stated that the current Generation Z was the “mass-shooting generation.”

"I call this the mass shooting generation because that’s what we’ve really been through — Columbine, Parkland, Pulse.," Frost said.

Frost’s fellow incoming freshman congressman, Jared Moskowitz (D), represents the district in which the Parkland shooting occurred. Moskowitz has also held a strong position against assault rifles but is considered more of a “Blue Dog Democrat” or “moderate” in comparison to Frost.

Several Republican lawmakers have told The Floridian that they feel confident that they will be able to work with Moskowitz on “meaningful” and “bipartisan” legislation once Republicans gavel in their majority, but believe that Frost will look to become the Progressive cross-bearer in Florida and will tow the same legislative line that the Rep. Alexandria Ocasio-Cortez-led “Squad” has pushed over the past several years.

Two newly-elected Republicans to the House, Anna Paulina Luna and Cory Mills, both staunch 2nd Amendment supports, have aligned themselves with the incoming majority that has committed to holding Biden administration accountable for its actions, and pass laws to preserve the Constitution.

The Constitution amendment that Republicans feel has been targeted the most by House Democrats over the past couple of years is the 2nd Amendment.

“Don’t ever forget that Our 1st Amendment is protected by our 2nd Amendment. That’s what the left really wants to destroy,” tweeted Mills during 2022 midterm primary election.

On Thanksgiving, Mills appeared on Fox News where he addressed President Joe Biden’s call for “greater action” on control.

Mills said that instead of trying to “vilify the gun or weapon itself,” the focus needs to be on “root causes” like “mental illness” and why criminals are committing more crimes in “blues states” as opposed to states like Florida that is considered to be red state.

In addition, Mills told The Floridian the Congress needs to allocate resources for "mental health research and promoting the nuclear family."

If incoming freshman lawmakers like Frost, Luna, Mills, and Moskowitz, are going to be effective legislators, they must be willing to cross the aisle and work to pass bipartisan legislation that will benefit Americans as a whole, not just on segment or faction of the population.