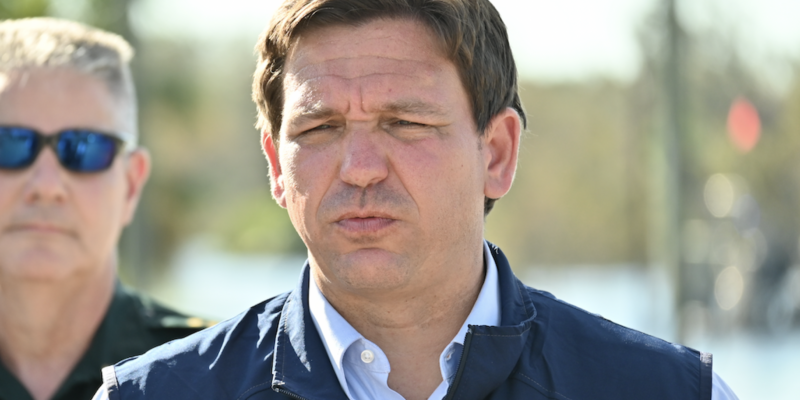 As water levels continue to rise throughout Florida as a result of Hurricane Ian, Florida Democrats have not missed any opportunity to politicize the natural disaster and push the apparent false narrative that Gov. Ron DeSantis had rescue operations paused because he was on the ground accessing the damage in Arcadia, Florida.

The Florida Democratic Party is running with a hollow report by ABC Action News Reporter Michael Paluska that accuses Gov. DeSantis of halting operations as a result of his presence.

“Their relief efforts were put on hold as Governor Ron DeSantis toured the area, frustrating people ferrying supplies back and forth,” tweeted Florida Democrats before sending out a press release that disingenuously states that “relief operations were paused” for several hours so DeSantis could get a photoshoot touring the area.”

"We are picking up supplies there from the National Guard and our local agencies, and we are running them to First Bunker on 70 west and 72 because all the major roads to get to those places are either flooded or caved in," Leslie Nelson told ABC Action News reporter Michael Paluska.

The press release states that Nelson “was blocked from delivering supplies and that the only reason she was given was ‘because of the Governor.’”

The Florida Highway Patrol trooper who spoke to Mrs. Nelson actually said, “it's because the Governor is here.”

Meaning, that for security reasons,  she was not allowed to leave the exact area the Governor was to board a boat for the tour of the river.

Nelson was not prevented from continuing the God's work she was doing. If anything, she may have be detoured. There is a security protocol that law enforcement follows whenever an elected official like DeSantis or even the President of the United States touch down in the state.

Nelson: So legally, why cannot I not?

State Trooper: Because the directed that we got when we got here was law enforcement and essential personnel only. Our hands are tied.

Nelson: I’m not trying to be rude, but we’ve been doing this very thing one street over in the only reason why we are not over there is

State Trooper: Because of the governor is here

Nelson: But why does that have to stop right now? It’s the same thing we’ve been doing before anyone was here.

Democrats jumped at the opportunity to score campaign points.

"Much needed aid was blocked from being delivered so that Governor DeSantis could preen and pose for photos in campaign attire. Its another clear example that Ron DeSantis cares more about polishing his public image than helping Floridians. Even in the wake of a devasting loss of lives, historic property damage, and flooding, the best interests of Floridians take a back seat to Ron DeSantis’s national profile,” stated Kokie Christian, spokesperson for the Florida Democratic Party.

The claim that DeSantis kept supplies from being delivered is now being debunked by The Floridian Publisher Javier Manjarres, who was on site before DeSantis even arrived at the location.

“The fact that anyone, Democrats in this case,  are trying to score callous political brownie points off of the backs of suffering Floridians should tell you all you need to know about their true motives during the rescue operations,” said Manjarres.

"When I arrived, I witnessed three boats (not the 3 or so FWC airboats on site) there with several people waiting with three FHP troopers, alongside the Moose Lodge waiting for the Governor to speak,” added Manjarres. ”These very same people then loaded a few supplies onto a couple of the boats and took off across the flooded river.”

“They were free to go as they pleased, and they did. One man even asked one of the  boat skippers to take him back across the river for an undisclosed reason. The boat captain helped him get across, ” continued Manjarres

Manjarres also said that DeSantis was at the DeSoto EOC before arriving for the boat tour. The tour lasted about 15 minutes before he walked up to give his press conference. DeSantis spoke to Manjarres regarding ongoing operations, where the Governor said that nothing was stopping as a result of his presence.

"Oh yeah, no, everything goes. I mean, like, don't stop anything we want to do," said DeSantis.

@GovRonDeSantis is not allowing rescue operations to stop while he is on the ground around the state. He gave @javmanjarres some insight into some of those operations.#FlPol #HurricaneIan pic.twitter.com/Q2KXgB6Cdj

Manjarres said that DeSantis greeted about 50 or so residents who asked to take selfies with him, asked for his autograph, and thanked him for coming to their community to access the flooding.

The DeSoto County Sheriff tweeted that operations in his county “stayed rolling all the entire time.