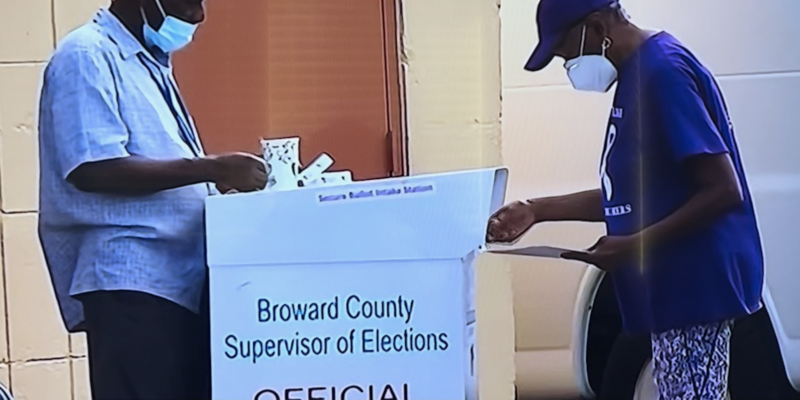 An NBC 6 television news segment on the first day of early voting in Broward County appears to show an unidentified woman, possibly a campaign volunteer or staffer, depositing multiple ballots in one of the remote ballot drop boxes that the Broward Supervisor of Elections, Joe Scott, is responsible for protecting.

In the segment, a black woman wearing a purple baseball hat, a purple shirt, and wearing a mask, is seen depositing two ballots and holding a third before the camera clip cuts away. The man in the frame appears to be a Broward SOE worker tasked to protect the ballot box and ensure that ballot harvesting is not occurring.

As the woman inserts the ballots, the man appears distracted with another task and does not question the woman to who those ballots belong, or if she had more than three ballots in her possession.

According to Florida Statute 104.0616, the woman is allowed to have in her possession her ballot, and the ballots of two other "immediate family" members, which would include a " person’s spouse or the parent, child, grandparent, grandchild, or sibling of the person or the person’s spouse."

(2) Any person who distributes, orders, requests, collects, delivers, or otherwise physically possesses more than two vote-by-mail ballots per election in addition to his or her own ballot or a ballot belonging to an immediate family member, except as provided in ss. 101.6105-101.694, including supervised voting at assisted living facilities and nursing home facilities as authorized under s. 101.655, commits a misdemeanor of the first degree, punishable as provided in s. 775.082 or s. 775.083.
The question is, who is supervising the ballots that are being dropped off, and how are the identities of the  "immediate family" members of the person dropping the ballots off being confirmed?
The case can be made that the woman had the three ballots she was allowed by law to possess, but whose ballots did they belong to?
The woman could have very easily deposited four or more ballots, which would be considered illegal ballot harvesting.
Facebook Twitter LinkedIn