The long-running feud between Florida Republican candidates Amanda Makki and Anna Paulina Luna flares up once more as the midterms approach. In the past, Makki has called out Luna's past as a Democrat and supporter of former President Barack Obama.

Both candidates are running in another hotly contested Republican primary race in Florida's 13th Congressional District seat, and the winner could go on to face the presumptive Democrat congressional nominee, Eric Lynn, in the general election.

Makki spoke with The Floridian in an interview primarily about Governor Ron DeSantis's (R) reelection bid. Makki claims that Luna did not vote for DeSantis in the 2018 gubernatorial general election.

The Floridian: "He [Ron DeSantis] did very well in 2018, but he narrowly beat Andrew Gillum. How do you think his prospects are moving into the 2022 midterm election?"

Makki: "Yeah, I mean, it was the African-American moms who fought for school choice who really put him over, and it's unfortunate because in my race, we have two Republicans. One, Kevin Hayslett, who has not voted in a Republican primary as a Republican voter since 2012. And Anna Paulina Luna, who just flat-out didn't vote in 2018. Not in the primary, not in general, for Governor DeSantis. And when I think of what Florida could have been, especially during COVID, with Gillum as the head of our state, it really frightens me."

Makki: "So, I'm very proud of my voting record, always having been supportive of Governor DeSantis, supportive of his term limits legislation when he was in Congress, supportive of what he's done on parental choice and parental controls. He's really the only Republican I see who's fighting for our children to not be indoctrinated with garbage that they're being taught in schools, and Florida's the only state where he have someone leading on that. So I think that his prospects are great, I think he's going to win in a landslide in this state. Whether you're Republican, or Democrat, Independent, he has helped keep this state free and open, kids in school, and that's what matters to most Floridians here."

Luna, who has been endorsed by former President Donald Trump, is considered the frontrunner in this primary, but recent attack mailers by Hayslett could help narrow the gap between Luna and the rest of the field of candidates.

One mailer, in particular, uses Luna's past statements in support of former President Barack Obama and his policies, against her.

"I was a huge supporter of Obama" and "I always agreed with President Obama's immigration policies," read the mailer.

Neither Luna or her campaign could be reach for comment.

Here is Luna's voting information and past voting record. 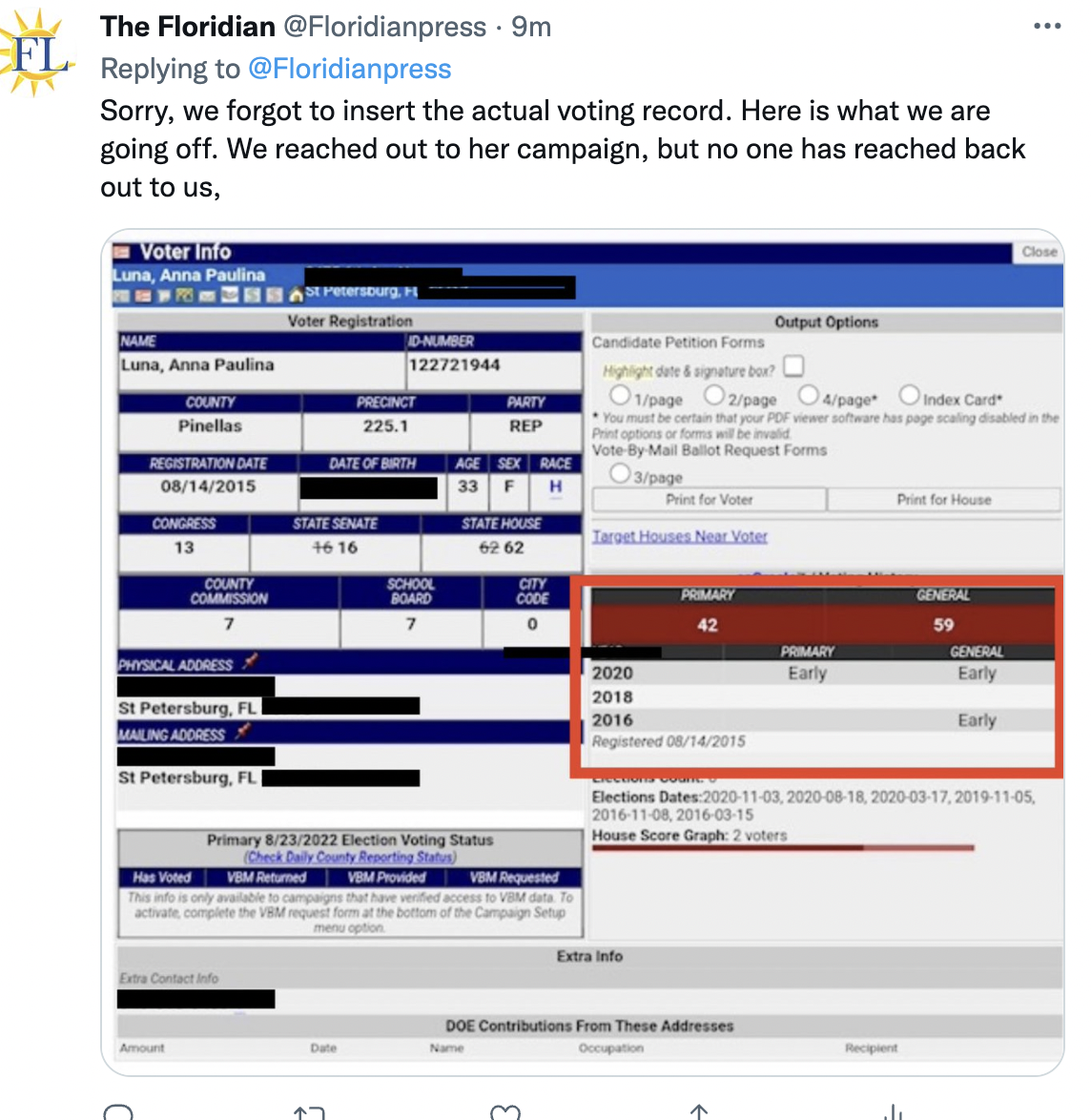