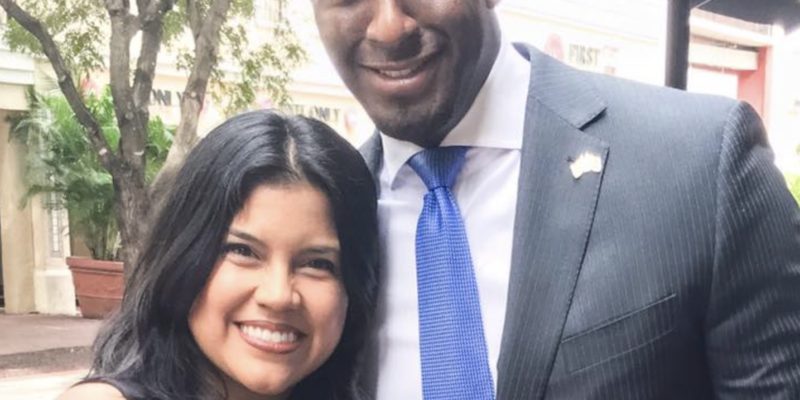 When Rep. Crist ran for governor against then-Gov. Rick Scott in 2014, Crist named Annette Taddeo as his running mate, who is now seen as more of a centrist in comparison to Hernandez-Mats.

Taddeo is of Colombian descent and is considered liberal, but Hernandez-Mat is a first-generation Honduran-American and is considered to be a Progressive that is sympathetic to the current WOKE and Democratic Socialist ideals.

When Crist announced that Hernandez-Mats was his choice to counter current Lt. Gov. Jeanette Nunez, Republican smell blood in the political water, and immediately pounced on her over her past head-scratching statement where she refers to Cuba’s former murderous dictator, Fidel Castro, as “a political figure.”

Republicans immediately dubbed Hernandez-Mats as “Karl Marx” for the sympathetic remark she made about Castro after his death in 2016. Castro persecuted, maimed, and murdered, tens of thousands of Cubans during this 50+year reign of terror.

"A political figure dies at 90. Most in Miami rejoice, many in Cuba mourn #FidelCastro,” tweeted Hernandez-Mats.

A political figure dies at 90. Most in Miami rejoice, many in Cuba mourn #FidelCastro

Team DeSantis, which is sitting on a mountain of campaign cash that overshadows Crist’s 2022 campaign donations, was also quick to release a video of Hernandez-Mats dressing down combat veterans who look to get their teaching certification.

In an interview on the Progressive MSNBC network, Hernandez-Mats, who promotes “Brown Power” by expressing herself with the use of the iconic “Black Power” fist (only brown), called combat veterans who look to become teachers as “disrespectful” and unfit to teach students.

“This is them deprofessionalizing our careers. Teachers have gone to school for four years, they have their bachelor's, they have Masters, they have doctoral degrees, and to think that somebody that has four years of combat experience would do well in our schools is actually very disrespectful to our educators to our teachers,” said Hernandez-Mats

Just a reminder: The certification pathway for veterans interested in teaching passed UNANIMOUSLY. Yes, every Democrat in the Florida Legislature voted for it.

But #KarlaMarx doesn't want vets in the classroom. Why not? https://t.co/8V3fGTswbG

Hernandez-Mats’s anti-Veterans remarks contrast with her past statement where she honors them for serving.

In November 2017, Hernandez-Mats stated, “Honoring those who have served.”

How does Hernandez-Mats most recent veterans' statement honor them?

But the hits continue to come  in.

Republicans are also pointing out the she also supports mask mandates for children. Hernandez-Mats supported and promoted extending a mask mandate for school children in October 2021.

Crist’s pick for Lt. Governor has been embraced by just about every Florida Democrat, including those that have promoted themselves as being part of  “centrist” or “moderate” faction of the Florida Democratic Party.

But as expected, Democratic Progressives are championing Hernandez-Mats as being the next best thing since Cuban croquetas or Colombian cheese arepas.

Rep. Smith is the state representative that famously defended Socialism on the floor of the Florida House of Representatives.

Rep. Anna Eskamani, one of Florida’s rising political stars, also tweeted her support for Hernandez-Mats, calling her “a leader and fighter,” adding that she was anxious to see her win along side Crist later this year.

All indications and polls have pointed to DeSantis winning this fall, but that wasbefore Crist picked Hernandez-Mats. Now a DeSantis victory could be seen as a forgone conclusion considering Hernandez-Mats past and apparent love for Fidel Castro.

Whether Democrats want to except it or not, this is a big deal in South Florida.

Again, Democrats ran on Democratic Socialism in 2022 and lost.

Expect to see Republicans continue to capitalize on this early Christmas present courtesy of Santa Karla.