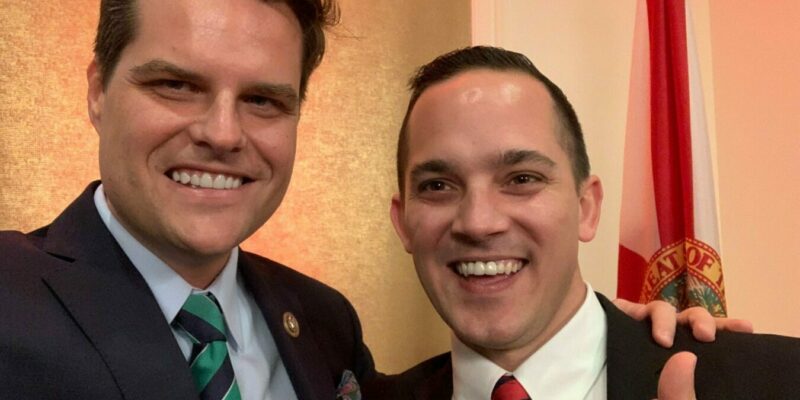 “This is your night,” said Rep. Michael Waltz to Mills moments before taking the stage to accept the Republican congressional nomination in FL CD 7.

This race was nothing short of nasty, and Sabatini, who attacked Mills’ wife by calling her “anti-Christian” and “radical,” showed the world how much of a vile extremist troll Republicans throughout the state already knew he is.

Sabatini’s “Nazi Youth,” as one Republican voter described them,  accosted elderly and underage minors during the primary election, tore down and vandalized Mills’ campaign signs, and even stalked the candidate himself on election day, and at his home during the first days of early voting.

The group, which included a staffer that recently threw up a White Supremacist hand sign on an Instagram live stream, had to have taken their marching orders and heal beat cadence from someone.

But from whom? Sabatini himself?

Sabatini’s election night concession tweet summed it all up and his SDE was in full display.

Recently, Sabatini has also been trolled on Twitter, with a couple of questionable and anonymous handles referring to him as "teenie weenie Sabatini."

“Tonight the Swamp won (with a $1.6 million dollar influx of fake news pieces in the last 14 days) Yet—I will never stop fighting for the America First movement Proud of the work Team Sabatini put into this & my family for their support! This is just the beginning—stay tuned,” tweeted Sabatini, who also announced that he and wife were expecting their first child.

The “fake news pieces” Sabatini mentioned were the accurate stories The Floridian posted about his past Democratic voting history, his opposition to Gov. Ron DeSantis’s “Freedom First” budget, and how Mills and outside groups capitalized on his political missteps.

Sabatini and his crew have been hypocritically complaining about the $1.2 million in “Dark Money” poured on top of his head during Early Voting, but what about the 100s of thousands of dollars in “Dark Money” that Super PACS spent to help Sabatini and attack Mills and his wife in the closing days?

On election day, it appeared as if a stronger dose of crazy Kool-aid was distributed to the Sabatini misfits. Sabatini’s campaign manager Logan Edge accused The Floridian of being paid off by Mills without offering a shred of evidence.

“We know you are paid by Mills,” stated Edge.

Mills did not buy any ads from The Floridian during the primary cycle, but if Sabatini wants to talk about a media outlet being in the tank for anyone, he needs to look in the mirror.

Breitbart News has written a whole bunch of fluff pieces about Sabatini, namely by Wendell Husebo, one of Sabatini’s closest friends.

Husebo, who’s mother donated $2,900 to Sabatini’s congressional campaign, never once mentioned that Sabatini had a primary race in any of the more 6 stories he has written about his friend.

Sabatini recently attended Husebo’s wedding in Italy, and posed images of him and Husebo, where the two referred to each other as great friends.

We asked Breitbart about the biased coverage for Sabatini and all they could tell us was that the believed Sabatini was going to win the primary election.

On election day, one of Sabatini’s trolls was almost arrested by the Port Orange Police after he appeared to have threatened Mills at a polling site, and then proceeded to following/stalking him for several Miles. According to a video The Floridian obtained, the subject in question raced to his vehicle and accelerated to catch up to Mills’ vehicle. After being caught at a red light, the same individual sped in and out of traffic recklessly in order to catch up to Mills and his campaign staffer.

The video shows a police unit blocking in Sabatini’s supporter in the middle of the street. The scene was something out of an episode of COPS.

Police let him off with a stern warning. The same individual posted a video of Cliff Maloney, Jr. on a bull horn spouting off against Mills at the same polling location.

Maloney, who was accused and arrested for rape several months back, turned off voters by obnoxiously yelling untruths about Mills.

One individual who voted for Sabatini told Maloney that his actions were only hurting his candidate.

Mills captured images and video of another Sabatini supporter just a couple week back stalking him and his family.

This individual, who knocked on Mills’ door and threatened him, was seen on video waiting 30 feet down the street from Mills’ home on two different occasion in the same week.

The following week (last week) the same individual in his blue BMW (with a Sabatini for Congress bumper sticker) drove by Mills’ home two other times, and then was spotted following Mills as he traveled to a campaign event.

Once the blue BMW realized Mills was on to him, he abruptly turned off the highway and sped off in the opposite direction.

In the end, Reps. Matt Gaetz, Marjorie Taylor Greene, Paul Gosar, Thomas Massie, and Sen. Rand Paul, not to mention the rest of Florida, now knows who Sabatini really is.

Florida, America dodged a bullet when Sabatini was crushed by Mills. Mills will be a member of Congress, not Sabatini.