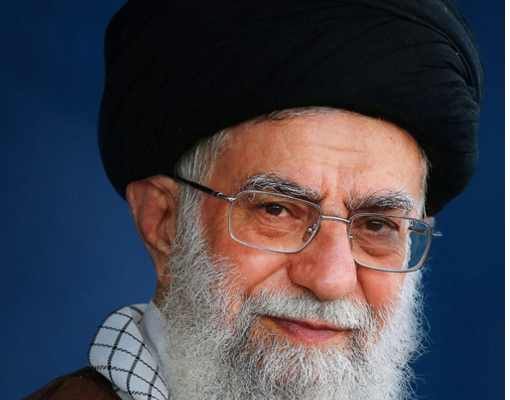 As talks of revamping a nuclear deal with Iran commenced at the International Atomic Energy Agency's Board of Governors meeting in Vienna, the Supreme Leader of Iran Ali Khamenei, voiced his disdain for Israel when he tweeted, "Today, #Zionism is an obvious plague for the world of #Islam. The Zionists have always been a plague, even before establishing the fraudulent Zionist regime. Even then, Zionist capitalists were a plague for the whole world. Now they’re a plague especially for the world of Islam.”

The tweet was followed by another more threatening message, “Muslim nations oppose the normalization of relations with the Zionists, clench their fists & shout slogans against states seeking normalization. The Zionist regime exploits these states. They don’t realize it, but we hope they realize it before it’s too late.”

The plague of Zionism should be exposed, in any way you can. These Arab and non-Arab states that shook hands, kissed & held meetings with the Zionists won’t benefit from what they did at all, not at all. This will only be to their loss.

Muslim nations oppose the normalization of relations with the Zionists, clench their fists & shout slogans against states seeking normalization.
The Zionist regime exploits these states. They don’t realize it, but we hope they realize it before it’s too late.

The statements highlight a growing trend of antisemitism masked as antizionism – where antisemitic tropes are woven into criticisms of Israel and those who support the Jewish state.

The Supreme Leader’s threats come in the wake of growing international concern over Iran’s nuclear program. Most recently, two surveillance cameras installed at the nation’s main enrichment site, which is monitored by the United Nations, were turned off. Originally installed in 2016, the cameras allowed constant monitoring of the facility to ensure the enrichment process follows the protocols set in place by prior agreements. The country has reportedly advanced their uranium enrichment and has stockpiled their supply, sparking international concerns. The nation's enriched uranium supply is close to the purity levels to that of a nuclear weapon.

A nuclearized Iran poses a great risk to stability in the Middle East and Western security. The Supreme Leader has been a vocal critic of Israel’s right of existence. On June 7, 2022, Iranian ground forced commander, Kiumars Heydari, spoke with Iranian media and threatened to “raze Tel Aviv and Haifa to the ground.” The statements came only hours after news broke that Thai security forces successfully foiled multiple attempts by an Iranian agent to build a terror cell in Thailand to attack Israeli citizens.

As tensions related to Iran increase, the Jewish institute for National Security of American (JINSA) released a policy report on Iran and called for the implementation of “Plan B” – a comprehensive, multifaceted approach to U.S. policy on Iran. It calls for both diplomacy and sanctions and urges the Biden administration to recognize that Iran Nuclear deal (JCPOA), which was negotiated by the Obama administration, ultimately failed because of Tehran’s blatant obfuscation of their responsibilities in the agreement, not due to the Trump administrations’ designation of Iran’s Revolutionary Guards as a foreign terrorist organization.

The Biden Administration has remained critical of the Trump administration’s role in dismantling the deal. As reported by Politico, former White House press secretary Jen Psaki called the move reckless and noted that the deal ensured tight restrictions of Iran’s nuclear activity.

President Biden's continued attempt to negotiate a revival of the 2015 nuclear deal has drawn bipartisan backlash on Capitol Hill. However, any approach the administration takes should consider regional allies of the United States, like Israel, and hold the regime accountable for sponsoring terrorism around the world.

Originally published in The Emet Times

DeSantis Tears into Push for Special Session on Gun Control