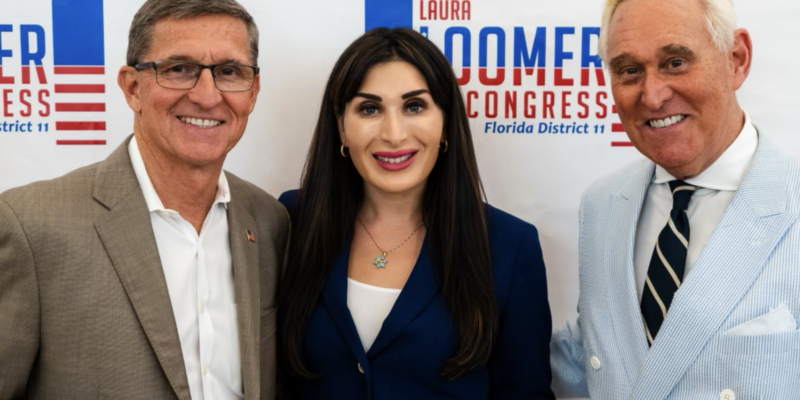 Conservative journalist and political firebrand Laura Loomer is making waves, and this time, following redistricting, Loomer is now running in a Republican majority congressional district and could very well be in position to win a seat in Congress. This time, she’s running against longtime GOP Congressman, Rep. Daniel Webster (R-FL) in District 11. Webster was the 89th Speaker of the Florida House of Representatives and has been a member of the national House of Representatives since assuming office in 2011. In between his stints as speaker and his current position, Webster was a Senator in the Florida Legislature.

On Wednesday, Loomer had a campaign event in Wildwood, Florida (near The Villages) that included speakers such as Roger Stone, Gen. Michael Flynn, and Col. Mike McCalister.

The trio gave raving reviews and endorsements for Loomer, and some even went after Rep. Webster, who is considered to be an establishment incumbent.

“I was excited when some in this room drafted her (Loomer) to come here and run for Congress in a district where I know she can win," said the former advisor to President Trump, Stone. “And I was even more excited when I realized she was challenging do nothing Dan Webster…Laura Loomer is a fighter. And Dan Webster is a Republican in name only.”

“We are a republic, which means you’re going to have to vote for people like Laura Loomer and we expect her to get in here and light some of these rear ends on fire.” Said the former General Michael Flynn. “That’s what we want. We want somebody who’s representing us.”

Col. Mike McCalister while talking about Loomer also dove into the idea of “RINO’s” and GOP politicians.

“It’s more than just an "R" behind your name on a ballot to be the right fit for America. We need the right Republicans, and it starts in the primary.”

Loomer ended the night with some words of her own.

“All of society’s institutions are still organized along the procession of Democrat and Republican lines. And just look at the sort of elected officials we’re getting as a result of this process, this extremely broken and corrupt, crooked process. Just look what’s happening right now: The barbarians are not at the gate they are inside the castle. They have taken over the castle and it is time for warriors to drive them out.”

For the last three consecutive fundraising cycles, Loomer has outraced Webster. In 2020 when Loomer ran for Congress in Florida's 21st District, she was endorsed by President Trump, and he also voted for her, given that Florida 21 is where he lives.

After Webster did not support President Trump during the second impeachment vote and publicly signaled that the 2020 presidential election was not stolen, along with recently voting to send $40 billion dollars in aid to Ukraine, Webster seat is perceived vulnerable, especially as he faces Loomer, a nationally recognized public figure and pro-Trump, anti-Big Tech, and anti-establishment activist.

The primary election will take place on August 23rd.