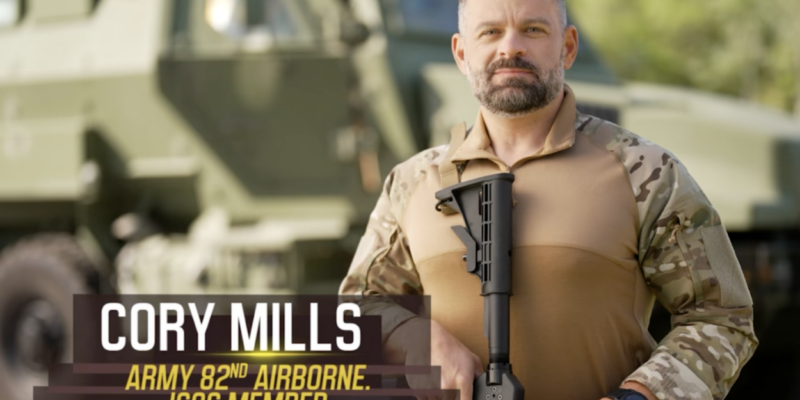 Combat Veteran Cory Mills has put his money where his mouth is less than two weeks after the redistricted congressional maps were signed off on by Gov. Ron DeSantis. Mills, who is running for Congress in Florida’s 7th District, just announced that he has made a “six-figure” ad buy in the Orlando media market with a video that takes a swipe at media and the “woke culture” that many Progressive Americans subscribe to.

Mills’ ad pokes fun at the “liberal media” narrative set in a POLITICO story that his munitions company sold tear gas that was used against “Black Lives Matter protestors.”

In the video, a smirking Mills says,”  if the media wants to shed some real tears, I can help them with that.”

The married father of two is obviously offering the media a demonstration of how tear gas is deployed.

“I will continue my commitment of supporting law enforcement and my fellow Americans by shedding light on the travesties being committed by the failed Biden presidency, the “woke” Progressive culture, and the “Fake News” that only serves to promote the misinformation Democrats are peddling,” stated Mills in a press release

The Floridian was the first media outlet to report that several members of the Progressive “Squad” in the U.S. House of Representatives—Reps. Cori Bush, Ilhan Omar, and Alexandria Ocasio-Cortez—have rested their crosshairs on Mills’ support for law enforcement by supplying them with tear gas.

This is the latest campaign expenditure Mills has made in his efforts to replace Rep. Stephanie Murphy (D), who retired from Congress.

Earlier this year, Mills dropped tens of thousands of mailings introducing himself to Republicans and knocking one of his primary opponent, Rep. Anthony Sabatini for voting as a Democrat in the Obama elections of 2008 and 2012, as well as for voting with Progressives against Gov. Ron DeSantis’s budget.

Rep. Sabatini was the lone Republican vote along with 7 other Progressive Democrats to oppose the DeSantis budget.