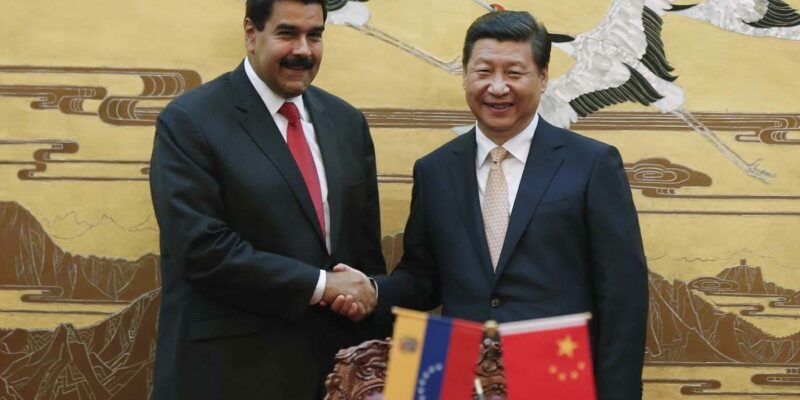 The new China-Russia Iron Curtain that has risen in the east continues to cast a dark shadow over American and Latin American interests, as both nations continue to strategize together over garnering more control over natural, economic, and infrastructure resources of several nations in South America.

The Chinese and Russian presence in Latin America is unmistakable, particularly in Venezuela, where Strongman Nicolas Maduro has continued to strengthen the military, economic, and intelligence ties with anti-democratic Chinese and Russians.

U.S. national security interests in the region are at risk, and it’s a threat that the Biden Administration is very aware of.

During his confirmation hearing as Undersecretary of State, Brian Nichols expressed his concerns for Venezuela, saying that “the extensive efforts of Russia, China, Iran, Turkey, and others to avoid sanctions are deeply concerning,” adding, “We, who want to see democracy in Venezuela, must aggressively challenge those actions and work to ensure that the proceeds of criminal activities do not return to the regime.”

Nichols also said that the U.S. had “a great advantage” in cooperating with a “broad multilateral coalition that works to promote democracy,” and that these efforts could push Dictator Maduro towards conducting “free and fair elections.”

The threat that China poses to the region and to the U.S. is not only shared within the Biden Administration but also in U.S. Congress.

During a recent meeting of the U.S.-China Economic and Security Review Commission, Dr. R. Evan Ellis, Latin America Research Professor for the Strategic Studies Institute at the U.S. Army War College, points to Communist China’s social and economic power grab in the region.

“PRC’s (People’s Republic of China) engagement in Latin America is very harmful to the region's prosperity, democracy and the strategic position of United States.  As elsewhere, the Chinese state is pursuing a mostly economic-focused engagement although nonetheless strategic to orchestrate flows of wealth principally to its own benefit,” stated Ellis in his opening remarks.

Ellis continues, saying that “China's pursuit in Latin America and the Caribbean…seeks globally-reliable access to commodities and foodstuffs but also markets and technology.”

According to Ellis, China is bleeding Venezuela of its assets,  as the embattled Latin country is actively selling its resources to stay afloat and to pay back the money they owe China in goods and services sold to them, including Maduro’s purchase of Chinese military fighter planes and radars.

In addition, China is also taking huge steps in controlling much of the electricity that is produced in the region, as well as in the 5G space.

U.S. legislators like Florida Rep. Michael Waltz, a U.S. Army Green Beret who focuses on foreign policy, echoed the threat the PRC poses to American interests. In a written statement to The Floridian, he pointed to the “$615 million in weapons sales” the Chinese government made to Maduro, sales that Waltz believes “fueled the crisis in Venezuela.”

“The Chinese Communist Party’s influence in our Hemisphere is growing and this is an enormous concern for our national security,” added Rep. Waltz.

Senator Rick Scott, who alongside Senator Marco Rubio is arguably the loudest voice of opposition to China in Washington, recently told The Floridian that companies like Apple that seek to do business with “Communist China” do so at their own risk, and reiterates what Rep. Waltz says about the growing military threat China poses to the U.S.

“The Communist Party of China is not our friend, they’ve decided to become our adversary…They are building a military to try to defeat us,” said Scott about the Chinese regime.

Florida Rep. Greg Steube agrees and believes that by Maduro allowing China to expand in Venezuela, the threat is much closer to home.

“China’s expansion into countries like Venezuela bring their threat closer to home for the United States, but also needs to be taken very seriously because we know for a fact that China uses resources in these countries to fuel their military buildup under military-civil fusion,” stated Rep. Steube. “Their actions in regions like South America, and also Africa, prove that the United States must be much more active in deterring China and limiting their influence in different regions around the world.”