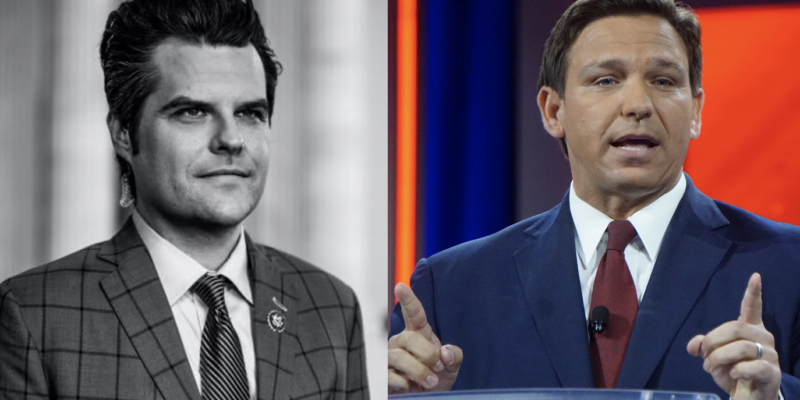 At the conclusion of CPAC, questions began to arise regarding potential presidential candidates in the upcoming 2024 general election. President Donald Trump (R) did not rule out a third run at the presidency, but he did confirm that he would be involved in the upcoming 2022 midterm election. Another likely candidate is Florida Governor Ron DeSantis (R), but he recently confirmed that “it’s too premature” to be thinking about a presidential run.

However, another candidate that has been touted as a potential presidential candidate is Florida Rep. Matt Gaetz (R), who has scored his first endorsement in Roger Stone. The veteran political operative recently called Rep. Gaetz “a scrapper” and “a brawler.”

In an interview with Steve Malzberg, Stone was asked about being under investigation and whether or not he believes that President Donald Trump will attempt to challenge President Joe Biden (D) in 2024.

“As far as whether the president is going to run again, he seems to be teasing that he may, if he does he can count on me,” Stone admitted. He added that he “will be there” for the President should he need him to be.

However, “if he does not, four years is a very long time, even in American politics,” added Stone,  “if he elects not to run, well, then, those of us who support his agenda, the America First agenda, we need to have a back-up candidate.”

Stone noted that conservatives “need to have someone who can win a general election on the same platform that Donald Trump won on.”

In turn, for Stone, that candidate would be Gaetz, who is known in some Republican circles as the Yosemite Sam of Florida for his push for open carry in Florida, expressed that he is a staunch supporter of President Trump and also offered to leave office in order to represent the President during his impeachment trial.

Florida Gov. Ron DeSantis appears to be the favorite 2024 presidential candidate if President Trump decides not to seek reelection, but he may not run. DeSantis and Gaetz are friends and political allies, so it would be interesting to see if either man will run a spirited campaign against one another if they both decided to seek the Republican presidential nomination.

Graham: Trump Can Make Republican Party ‘Stronger’ Or ‘Could Destroy It’