The Republican congressional race in Florida’s 22nd district was virtually non-existent before the COVID-19 pandemic all-but shut down the nation and electioneering was we know it. But thanks to Republican congressional candidate Jessica ‘Jessi’ Melton, she has turned her primary race into an eye-opening and eyebrow-raising contest that has caused some voters to shake their heads in disbelief, especially remarks made about Jewish-Americans,

Melton has become a prolific  “Tweeter” since the outbreak of the virus, pushing the envelope on many contentious and controversial topics. Her efforts have garnered a significant following of national political activists, as well as support from people who push conspiratorial theories.

About two weeks ago, the devout Christian or “Believer” defended fellow “Christian” Actor Mel Gibson over the “hearsay” accusation made by Jewish-American actress Winona Ryder alleging that Gibson directed anti-Semitic jokes against her.

“We were at a crowded party with one of my good friends, and Mel Gibson was smoking a cigar, and we’re all talking and he said to my friend, who’s gay, ‘Oh wait, am I gonna get AIDS?’” said Ryder “And then something came up about Jews, and he said, ‘You’re not an oven dodger, are you?’” (Fox News)

Melton’s tweet seems to call out the “Left” for attacking Mel Gibson, but the people who have “attacked” Gibson for this past anti-Semitic remarks or rantings are those who stand against antisemitism.

This issue is not political in nature or about the left or the right side of politics. Mel Gibson’s antisemitism is evidenced by numerous public incidents where he has made racist Jewish slurs, including one directed towards a police officer who was arresting him for driving under the influence. Gibson infamously ranted: “F-cking Jews… the Jews are responsible for all the wars in the world. Are you a Jew?” The arresting officer was Jewish.

Gibson doesn’t just single out  Jews. The award-winning actor has made many other bigoted statements that have come to public light. Just to highlight a few, leaked audiotapes recorded him saying the following:

“You look like a pig in heat, and if you get raped by a pack of ni–ers, it will be your fault,”

“I will report her to the f-cking people that take f-cking money from the wetbacks.”

Gibson’s own father was an outspoken anti-Semite and avid Holocaust denier who has asserted numerous anti-Jew conspiracies.

“Is the Jew still actively anti-Christian? He is, for by being a Jew, he is anti-everyone else.”

Gibson has never condemned the views of his father. In fact, he has supported his father publicly. “My father has never told me a lie.” “He never denied the Holocaust. He just said there were fewer than 6 million” Jews murdered in the Nazis’ concentration camps.”

“Go and ask an undertaker or the guy who operates the crematorium what it takes to get rid of a dead body,” he said. “It takes one liter of petrol and 20 minutes. Now, six million?”

Melton’s potential Democratic opponent, incumbent Rep. Ted Deutch, has been the focus of many of her attacks.

On May 8th of this year, Melton directed a Facebook post at Deutch, calling him an anti-Semite for not denouncing Muslim-American Rep. Ilhan Omar (D) over her past anti-Israel tropes. 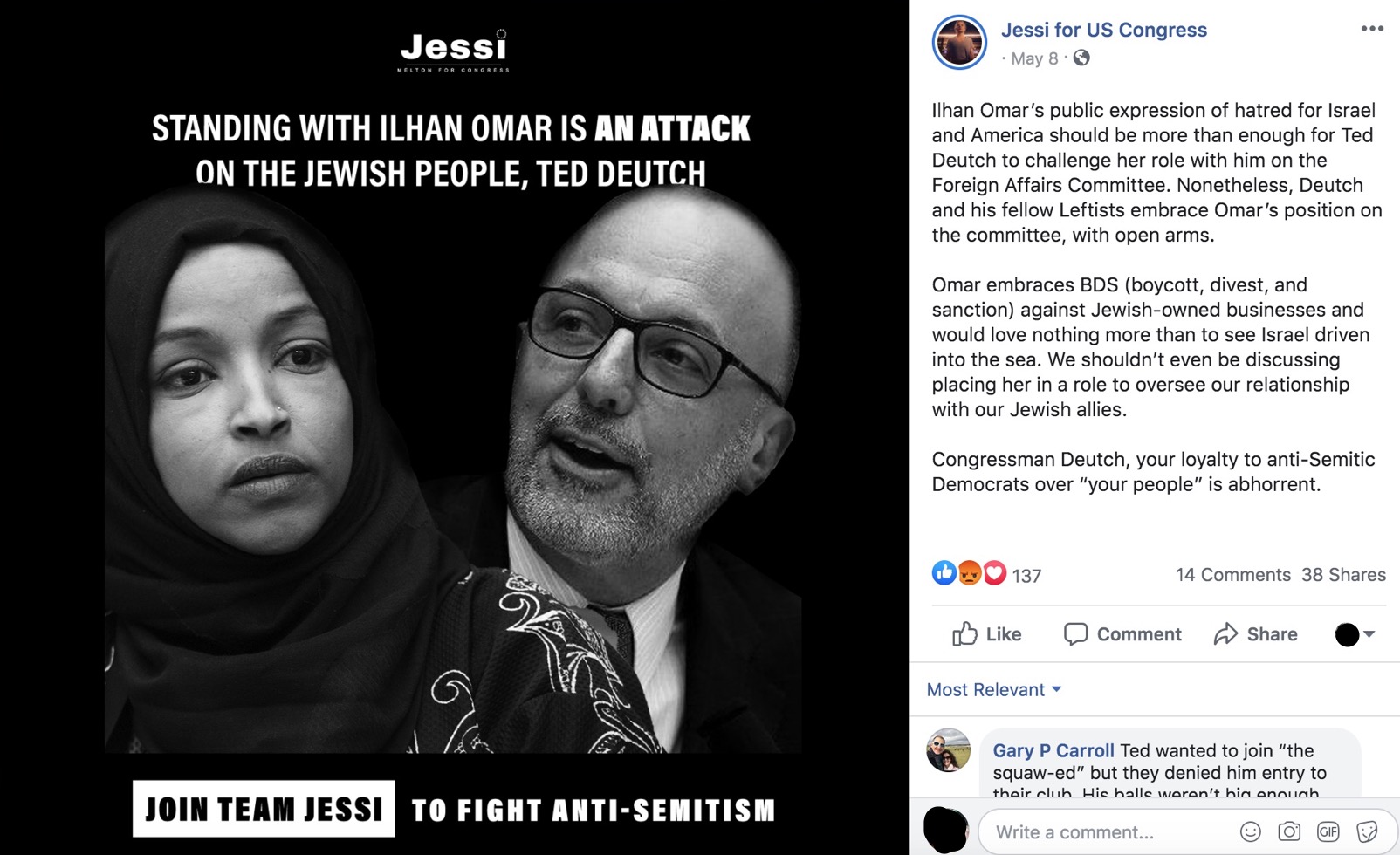 Because Melton refers to American Jews as “your people” when addressing  Deutch, is the congressional candidate suggesting that two groups of people exist?

Guns and the Holocaust

In response to a Tweet by Rep. Deutch, where he highlighted the need for more Holocaust education, Jessi responded by falsely stating that “6 million Jews were murdered as a result of giving up their gun rights in the name of progressivism,” and suggested that history classes should be mandated for members like himself.

Firstly, she completely dismisses the issue of Holocaust education. Secondly, the notion that gun control caused 6 million Jewish death by genocide has already been widely debunked by many news outlets and individuals educated on the topic. Politifact 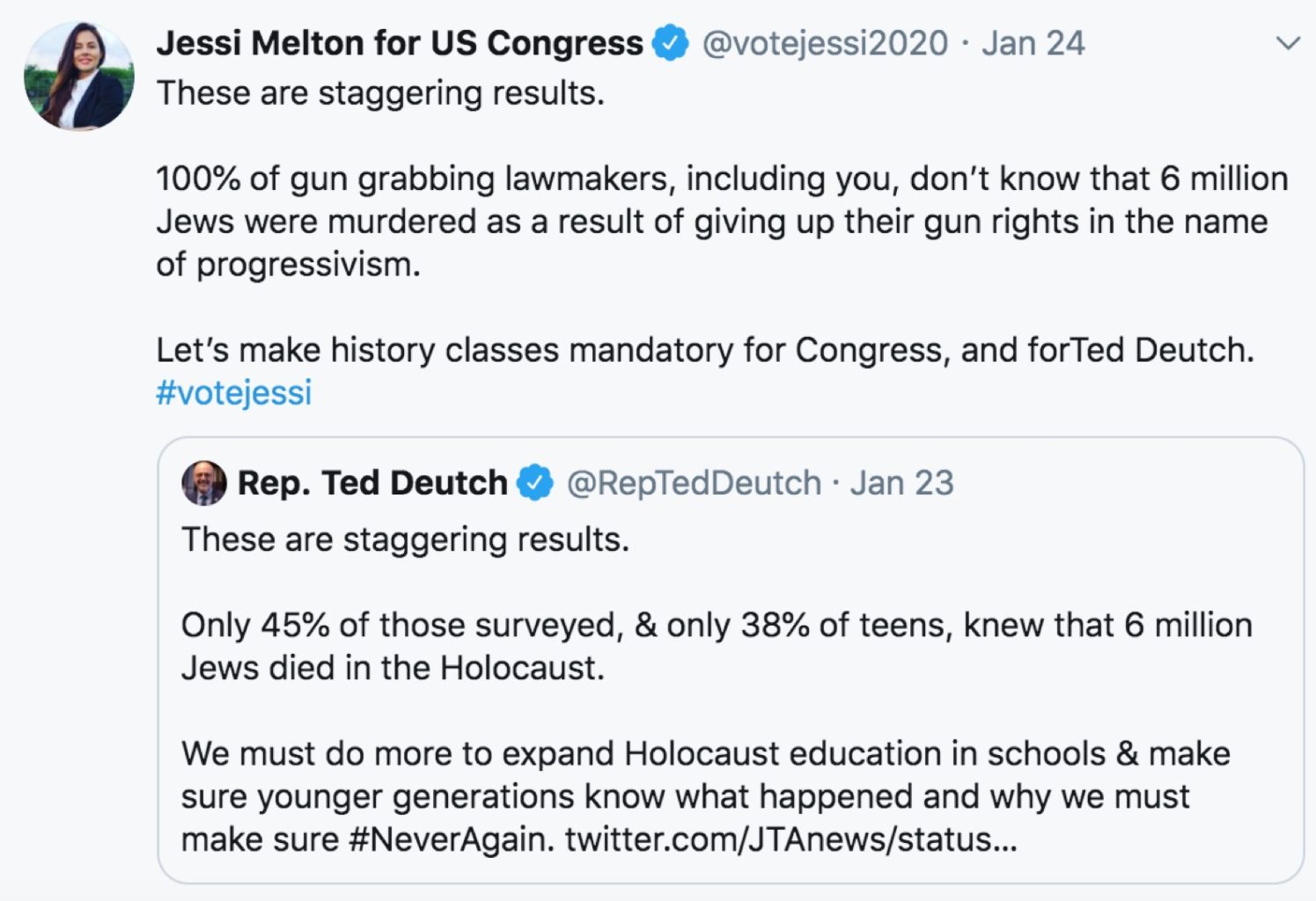 Abraham H. Foxman, Holocaust survivor, and Anti-Defamation League’s previous national director has stated that “[t]he idea that supporters of gun control are doing something akin to what Hitler’s Germany did to strip citizens of guns in the run-up to the Second World War is historically inaccurate and offensive, especially to Holocaust survivors and their families.”

“There’s no empirical evidence for it,” he wrote in an email. “Moreover, Hitler was in favor of gun possession, and relaxed gun control laws in Germany for everyone, except Jews of course. It makes no sense to compare Hitler to the present situation in the US because all of Hitler’s actions can only be interpreted through the lens of the final solution, which is not relevant here in the US.”

The “Jews” did not give up their gun rights as Melton states. The Nazi’s did that.