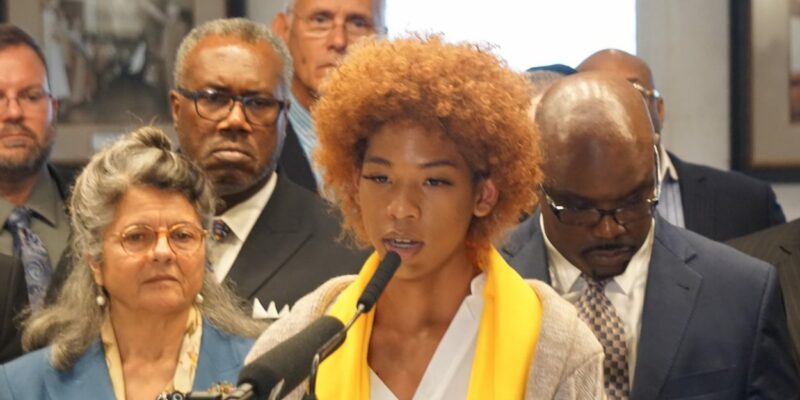 Two of the most outspoken pro-LGBTQ and race equality elected officials in the Florida legislature, controversial Reps. Anna K. Eskamani (D) and Carlos Guillermo Smith (D), are facing significant backlash over their effort to “bully corporate donors” of the Florida Tax Credit Scholarship program into pulling their contributions from the education initiative that supports LGBTQ and black students attending private religious schools.

A press conference held on Tuesday by the Florida African American Ministers Alliance for Parental Choice in the state Capitol, had with some 100 black and Hispanic pastors and parents in attendance to push back against Smith and Eskamani’s anti-school choice push.

Smith and Eskamani argue that they just want to change policies at some private religious schools they deem  to be discriminatory.

“These politicians are recklessly harming our innocent and vulnerable,” said Robert Ward, pastor of St. Petersburg’s Mount Moriah Missionary Baptist Church.  “Instead of attacking our children, they should be reaching across the aisle searching for win-win solutions.  We will not sit idly by while politicians try to snuff out the dreams of tens of thousands of low-income black and Hispanic students.”

“This is a scholarship program that has empowered economically disadvantaged families, many for the first time in their lives,” said Pastor Louis Vega, founder of The Way Christian Academy in Tampa. “Now this empowerment, this freedom to choose, is being yanked away.”

Florida Congressman Al Lawson (D), who could not be in attendance, contributed his remarks in favor of school choice.

“I am greatly disturbed to see political gamesmanship being played with the Florida Tax Credit Scholarship program,” said Congressman Lawson, who is on the governance board at Step Up For Students, the nonprofit that helps administer the scholarship. “For two decades, these scholarships have been pathways to a better future for hundreds of thousands of low-income students, the vast majority of whom are black or Hispanic. Pressuring donors to withdraw contributions will result in fewer scholarships available to our most vulnerable children. I urge you to stand down and find solutions that do not involve denying opportunities to desperate families.”

It is interesting to point out that Rep. Smith, who has been the loudest voice in support of all every LGBTQ issue, is on the opposite side of the LGBTQ community on this issue.

Elijah Robinson of Jacksonville (pictured), who spoke at the press conference, said he contemplated suicide after being bullied over his sexual identity, forcing him to leave the public school system to attend a private religious school paid for by the school choice scholarship.

Republican state Rep. Byron Donalds echoed what some of the pastors and Democrat state representatives said about Eskamani and Smith, saying that they were simply playing politics with the education of underprivileged and minority students.

“This is politics at its worse,” said Donalds “Instead of trying to find a solution, they went out and created a problem and their own solution. Religious schools have a constitutionally protected ability to exercise their religion and religious beliefs.”

“She’s play politics. On this one, I’m going to call a spade a spade,” added Donalds.

Donalds concluded by saying that “If you truly care about LGBTQ students, knowing that they take part in this program, then you find other ways than to do this. This is politics of the worst kind.”

Rep. James Bush III (D) warned that if these scholarships are scrapped, schools in his district were going to close.

“I don’t think that I would be in the best interest of minority kids,” said Bush about Smith and Eskamani’s efforts. “We have children that need these opportunities. When there are opportunities for parents to make choices in school that they feel will address their specific need, then I feel we should afford them that opportunity.”

Another Democrat, state Rep. Al Jasquet, told The Floridian that he didn’t believe Smith and Eskamani “haven’t truly wrapped their minds around what it is when the Constitution says “guarantee of a quality public education and I think too much focus is put on public, and we don’t realize that the real value sits in the word quality in our education.

Rep. Jasquet says that some 738 students in his district, of which 73 percent are black, are beneficiaries of the school choice scholarships

Jasquet then unleashed a pro-Parent, pro-School choice mic-dropping screed that makes the case for how parents, not legislators, know what’s best for their children.

“To tell me that a mother and a father are not smart enough. It is not wise enough. Does not love their child enough. Does not know enough to select the best place for their child to be educated, to select a secular school, to select religious Catholic, to select a school focused on athletics, whatever school that that parent determines is better for their child, that mother and father knows their child better than we the legislators. So, I put the power in the hands of the parents, pure and simple. Parents know better than legislators how their kids operate and how their kids learn. So, I give that power to the parent to choose that education.”