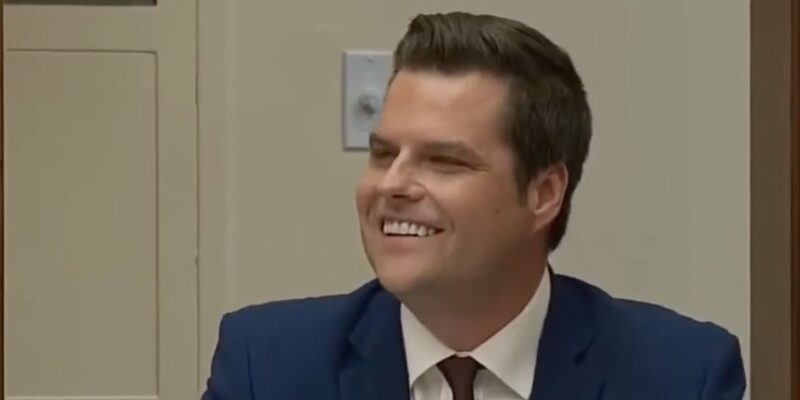 Liberal congressional Democrats loathe President Donald Trump and would give one of their eyes to see him impeached.

But the one Republican member of the U.S. Congress Democrats and Twitter trolls hate the most is Florida Rep. Matt Gaetz.

Let me be fair to Gaetz’s detractors and emphasize the word “hate.”

It is also fair to say that Gaetz’s very liberal colleagues in the House of Representatives, detest him. They respect him, but Gaetz’s tendency to all-but eviscerate and embarrass House Democrats during committee hearings or on social media unnerves them.

You can just see it in their eyes and facial expressions. Thank God for C-SPAN being in the room.

Because Gaetz is smart and can articulate a narrative and smackdown on Democrats with the best of them, extremists’ heads blow up whenever he speaks, prompting them to revert to the only tired attack against him they can muster.

Yeah, they call him all kinds of derogatory names and link him to Trump, but the main point Twitter trolls attack him on is his 2008 DUI arrest.

Gaetz is said to get a kick out of the comments Twitter trolls leave on posts he makes. For example, Gaetz’s recently posted an op-ed in Fox News calling out Google’s biased and shady business practices, of which he shared on Twitter, brought out all the silliness you can imagine.

It’s like the Twitter version of the Star Wars bar scene came alive and melted down over Gaetz’s statements about Google.

The comments were nothing less than hysterical, and the memes were priceless, as Gaetz was accused of being arrested for DUI, not twice, but seven times.

Gaetz only has one DUI arrest.

While Gaetz laughs and eventually gets a good night of sleep, Twitter twits and some of their “award-winning” anti-Gaetz comments are on full display. Here are just a few of them.

Beware of @mattgaetz driving, talking, meeting with roger stone, getting stolen info from Russians and using it for re-election ALLEGEDLY, being your college roommate, and threatening a witness These are some of @mattgaetz greatest hits

Relax Matt. Take it easy.
Have a few drinks before you drive home.

Wrong-you couldn't be more wrong if you tried.
Have a drink and go drive around some. I think a third DUI will likely get you thrown in jail and out of office. So yeah I think getting hammered and driving through busy areas is what you should be doing.