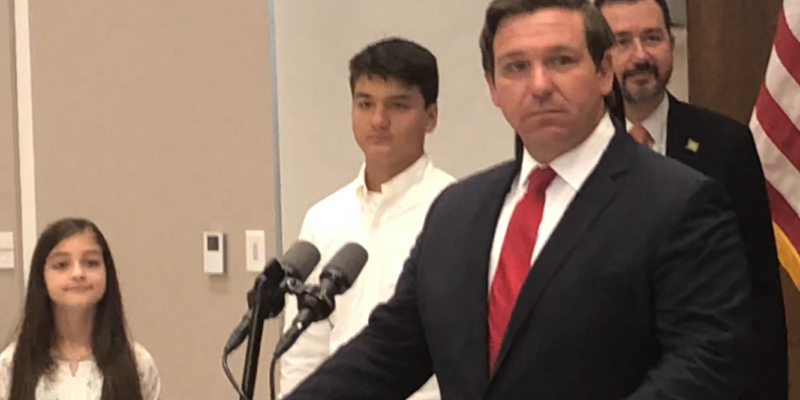 Who would have thought that support or opposing school vouchers and charter school could be such a political blood sport?

Gov. Ron DeSantis (R) ran on a wide variety of issues in 2018, one of them being education reform, specifically school choice that includes charter schools and technical career schools.

But according to one Polk County School Board member, Billy Townsend, DeSantis is clueless when it comes to education, and “all of his position (sic) on vouchers is going to do is feed vulnerable kids to grifters and abusers.”

The Floridian contacted the three dissenting school board votes in the controversial 3-3 school board vote that denied Bridgeprep Academy a charter school license in Polk County – Lisa Miller, Billy Townsend, and Sarah Fortney.

According to a recent poll of 405 likely Polk County voters conducted by National Victory Strategies, 36 percent of those polled believe schools in the area are going in the right direction, while 28 percent believe they are failing.

In addition, of those polled, a whopping 77 percent support a parent’s choice to send their children, to magnet, charter or private schools.

When asked about their opinion about charter schools, voters support public charters schools by 44 percent, while only 18 percent oppose them.

Mr. Townsend was the only one of the three to return our phone call for comment, so we asked him about what his school board was up to.

“All his position on vouchers is going to do, is feed vulnerable kids to grifters and abusers, said Townsend of DeSantis. “No oversight. If they were serious about it, they would be creating serious oversight.”

Townsend, who says he isn’t against charter schools, said that the board’s internal board and hired consultant recommended 11-1 against recommending Bridgeprep for a charter license

“Some of them we approve, some of them we don’t,” said Townsend, but did add that the “duel language at its (Bridgeprep) core” appealed to him.

We asked Townsend why he voted against the measure, assuming that it was because of the recommendation, but he insisted that “it became very clear” to him that this school application was “more about a real estate venture” than anything else.

“I voted against it, as did two others. Superintendent recommended approval subject to some changes in negotiations. I just voted to reject them.”

It goes without saying that Townsend felt very “uncomfortable” about Bridgprep because of what he calls “a lot of sketchy background” about the school.

But in talking to Townsend and reading his own personal blog, we discovered that Townsend could  be letting personal preferences influence his decisions on the school board.

Townsend, who was recently cleared of a state’s ethics complaint, is an open book, which is refreshing when it comes to talking to elected officials.

We then asked Townsend again if he supported charter "schools as a whole."

“My kids have attend charter schools at various times, insisted Townsend.” What I am against is grifting. Some of the abuses that we see.”

“I wouldn’t say I support or don’t support charter schools as a school,” continued Townsend.

“I am very skeptical as a rule, of any essential for profit charter, said Townsend.” This school Bridgeprep has a very much for profit management company. They talk quite a bit about their real estate portfolio.”

So right off the bat, Townsend, who opposses the “privatization of education,” was set on disapproving Bridgeprep, because according to him, it “sounded more” to him “like a real estate venture than a school.”

During the recent school board meeting where the 3-3 application denial vote occurred, Townsend stated that he “got the impression…that it was more of a real estate venture than a school.”

“It’s just I think a difference in philosophy in what I think public education is, said Townsend.

Is it fair that one individual’s personal “philosophy” on public education strike down a school application, or deny the school choice to voters?

In reached out to Bridgeprep academy for comment about Townsend’s allegations against the school, school officials directed us speak to its management company’s CEO, JC Quintana.

Quintana, who says his group will be litigating the decision in the appeals process, told The Floridian that no one’s "personal beliefs or philosophies" should get in the way of what voters need, or state statute.

Quintana also said that Townsend was “misinformed” when he made the “real estate” allegations against his group, adding that every single one of Bridgeprep’s schools sit on leased land, and that neither Bridgeprep or his management company, had any real estate assets.

Bridgeprep sent over their letter responding to the Polk County School Board’s denial of their application.

Here is an excerpt of the school asserting that the school board's statements made and the "justification of denial" was "not consistent with State law regarding the denial of charter school applications."

Townsend, who believes that charter schools are “largely staffed by people who can’t get jobs at regular schools,” said that he didn’t “consider vouchers any kind of competitive threat” to the school district.

“Vouchers are only going to the fly by night, show up on the side of the road types of schools, with no standards, no oversight,” said Townsend.

He continued a sort of dressing down of charter schools, stating,” my teachers her at real schools, are working second jobs to make ends meet.”

Townsend first made the remark to us, then published in on his website.

The hits came coming against charter schools and “for profit” schools:

“Instead of trying to grift a fraction of kids, they really should be paying attention of how making the teacher’s life better.”

“Vouchers or no Vouchers. Charter or no Charters, is kind of a red herring. What really matters is the underlying fraud of the school grades and the test and punish model of education that’s killing the teaching profession.”

Townsend then said that “Charter schools just hire teachers from public school,” which appears to contradict his previous statement that these schools are “largely staffed by people who can’t get jobs at regular schools.”

Then came the swipe against Tallahassee where Townsend said that he believes Corcoran’s office will overturn his board’s decision because the office didn’t respect “what local school districts do.”

The Polk County School Board has meeting scheduled for May 14, but addressing the Bridgprep Academy application is not on the agenda.