After Elon Musk took over Twitter, full transparency into the embattled Big Tech company was expected after numerous conservatives  and conservative lawmakers were reported to have been either banned from the platform or “shadow-banned.”

But while Musk has already made great strides in shedding sunlight onto his newly-acquired social media platform, Twitter appears still has a long way to go and is continues to be slapping questionable warning labels on content many conservatives are posting, including tweets of text and images from Congresswoman-elect Anna Paulina luna.

The images in question were of Luna posing with another woman at a Turning Point USA event, and of Luna holding a cigar at a cigar rolling table situated at the event. 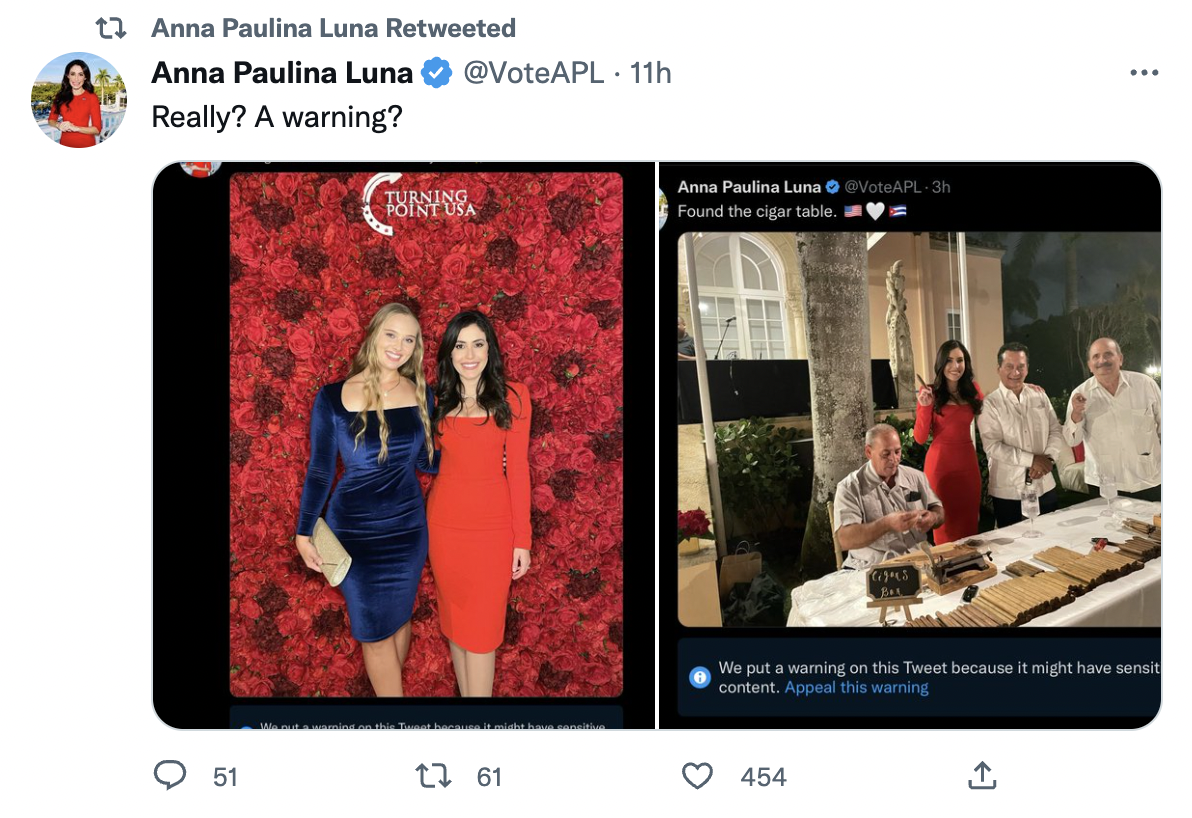 We are not sure what is so “potentially sensitive” about these two pictures.

Another one of Luna’s tweets was also flagged, but this red flag may have some merit, or not.

“Do you see what we’re fighting,” asked Luna before listing,” Mass censorship - Election interference - Control of information - Suppression In order to preserve and restore the Republic, big tech MUST be broken up.”

Pre-Musk Twitter would have definitely taken down this post, even suspended Luna for mentioning “election interference,” but after Musk himself stated that Twitter appears to have interfered with the recent Brazilian election, why would Luna’s tweet flagged?

"If those tweets are accurate, it's possible that Twitter personnel gave preference to left wing candidates," tweeted Musk about his platforms potential interference in Brazil’s 2022 presidential election

Luna also added that the corruption behind Twitter’s collusion with the Biden campaign during the 2020 presidential election that Musk exposed this past week when he released internal communications at Twitter, was “worse than Watergate.”

Republican lawmakers around the country are pouncing on the news that Twitter helped suppress news that would have been detrimental to Democrats and the Biden presidential campaign during the 2020 election cycle.

“Hunter Biden broke the law, and Big Tech tried to stop you from knowing it,” stated Sen. Marsha Blackburn (R-TN)

Now we are learning that the FBI was meeting with Big Tech companies in the months and week leading up to the 2020 elections.

According to a Fox News report, “lawyers from the offices of Attorneys General Eric Schmitt of Missouri and Jeff Landry of Louisiana deposed FBI Supervisory Special Agent Elvis Chan as part of their lawsuit against the Biden administration.”

The complaint filed accuses government officials of colluding with Big Tech companies "under the guise of combating misinformation" to achieve then try to gain a bigger censorship footprint.