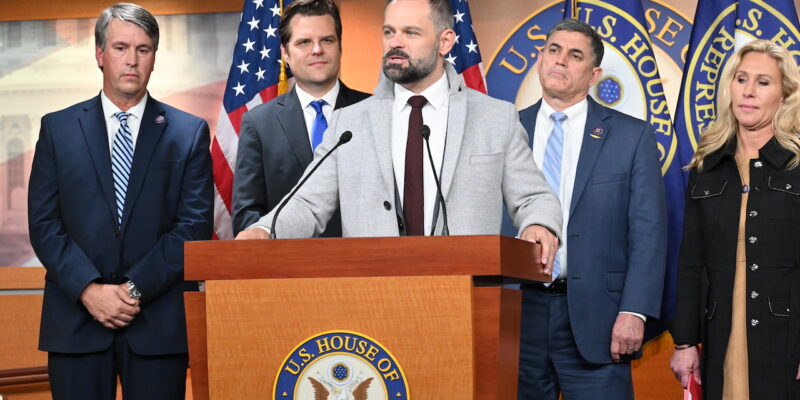 The soon-to-be Republican majority in the House of Representatives is on the warpath. Rep. Marjorie Taylor Greene (R-GA) has introduced a bill demanding an audit of the funds sent to aid Ukraine in its ongoing conflict with Russia. In a press conference introducing the bill, Rep. Greene introduced Congressman-elect Cory Mills (R-FL-7), who has extensive knowledge in international affairs.

This moment marked Mills' first Congressional press conference, even before his formal swearing-in.

Greene explains the bill as demonstrating the Biden administration's skewed priorities. "With the money we've sent to Ukraine we could've already secured our border, but we're not doing that," says Greene. "We're ignoring the dangers happening at our border, and a national security crisis that's happening in our country, while we are completely protecting another country's border, and also waging a proxy war with Russia," she adds.

She then says this demand for audit is a "privilege resolution." This means if no decision is made in 14 days' time, the bill will up for vote on the House floor. "If Congress votes this down, guess what the message will be to the American people? It will be "you don't get to find out what's happening with your money." You'll be telling the American people "no," and I think that's a very bad message to tell the American people."

The Floridian Publisher Javier Manjarres provides footage of Congressman-elect Mills' portion of the press conference, adding that Mills "points out that [Biden] was in the White House both times Russia invaded Ukraine," referring to the 2014 Crimea crisis.

@CoryMillsFL points out that @POTUS was in the White House both times Russia invaded Ukraine #Ukraine️ #Florida #flpol pic.twitter.com/42RKlZQ1NX

The clip begins with Mills saying "every single person, all of my colleagues, everyone in the press corps, is American taxpayers. We deserve to know where our money is being spent, and where it's being utilized."

As mentioned, he adds that "we also have to recognize the fact that both times, both times, that Russia has actually violated the sovereignty of Ukraine, who was in office? Joe Biden."

Additionally, Mills touches on previous foreign policy that already exists relating to Russia and Ukraine. "Why didn't they, in 2014, when the Russians came across, declare violation of the '94 Budapest Memorandum? That the Federation of Russia, the United States, Ukraine, and the UK and Northern Ireland is a partner, is a signatory? It was a non-nuclear proliferation agreement that basically recognized their sovereignty if they got rid of their nuclear weapons. Why are we not utilizing international treaties and agreements that have been violated as a mechanism for sanctioning?"

He concludes repeating what Green had already said: we demand transparency on where this money is going to. "Why are we allowing this to grow and become some warmongering, military-industrial complex buildup, that only benefits who? Not the American people. So I think there's a lot of questions that need to be asked on this, but the real answer is this: Americans deserve transparency of where their money goes. That is our job as elected officials. And when I was actually on the conference floor, and my colleagues will tell you, that's one of the questions I ask from leadership. Will you commit, to a 100% audit of Ukrainian funds, so the American taxpayers know where their money is going?"