Tallahassee— Florida has been recognized with national distinction for being the top state across economic and educational fields.

The State obtained ‘first place’ in economic freedom, higher education, freedom in education, and for the quantity of business formations. Governor Ron DeSantis’ Press Secretary highlighted the accomplishment through a tweet Wednesday evening:

Florida, the country’s fourth-largest economy, has emerged from the COVID recession with a boom. Such was highlighted by Governor DeSantis on Labor Day when the state celebrated resurfacing from the pandemic with an additional $60 Billion worth of economic growth.

This time around, DeSantis’ administration has proudly announced that Florida leads the country regarding Business formation and Economic Freedom.

According to a study executed by the United States Census Bureau, which measured the number of business applications per state, Florida emerged as the top state in this category. 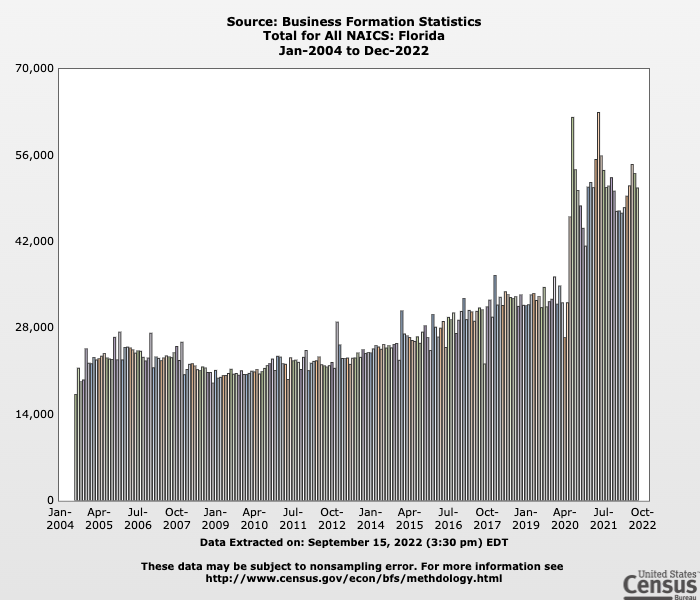 As reported by the Census Bureau, this past July alone, Florida registered an eye-opening 53,020 new business applications. Moreover, Florida has also become the lead state in economic freedom. As analyzed by the Cato Institute, Florida’s fiscal and regulatory policies have enabled it to become a national safe-haven for free-market capitalism.

Insofar as education is concerned, Florida continues to glisten as a hotspot for higher education due to its bright-futures scholarships, nationally acclaimed public university system, and attractive educational opportunities.

Most recently, The Heritage Foundation’s ‘Education Freedom Report Card’ ranked Florida as the number one state in the country. The report, published on September 9th, 2022, states that “Families looking for a state that embraces education freedom, respects parents’ rights, and provides a decent ROI for taxpayers should look no further than The Sunshine State.”

Last, yet most assuredly not least, Florida was acclaimed as the United States’ lead state in a report by the U.S. News and World report. After analyzing 2 and 4-year college Graduation rates, debt at graduation, educational attainment, and Tuition and fees, the report designated Florida as the best state for Higher Education overall.