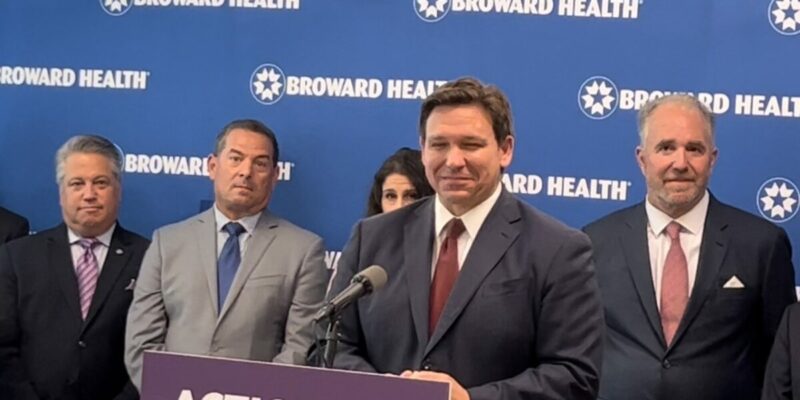 Florida Governor Ron DeSantis (R) responded to California Governor Gavin Newsom (D), extending the rivalry between both speculated 2024 presidential contestants. Last week during a press conference, Gov. DeSantis commented on Gavin’s call for the Department of Justice to investigate the Martha’s Vineyard incident. To the call, DeSantis said that Newsom’s “hair gel is interfering with his brain function.”

Jeb Smith, the President of Florida Farm Bureau, praised DeSantis’ work in office, saying that “our industry cannot afford to lose Governor DeSantis’s support in Tallahassee,” adding that “Governor DeSantis understands the value of hard work and dedication, which translates to efforts that allow our industry to thrive.”

However, while Smith feels that Governor DeSantis has had a positive impact on the growth of Florida, some like Governor Newsom have instead tried to court Floridians to move away.

Last week, Governor DeSantis made headlines after he ordered the transportation of two planes filled with undocumented immigrants to be sent to Martha’s Vineyard.

This move was met with widespread condemnation from Democrats, and Governor Newsom issued an order that the Department of Justice should investigate the state over the move.

In a press conference, Governor DeSantis informed that Newsom had issued a letter to the Department of Justice, asking the Department to prosecute Florida and Texas over their decisions to transport undocumented immigrants.

🔥 @RonDeSantisFL responds to @GavinNewsom's calls for the DOJ to investigate Florida for transporting illegal immigrants to Martha's Vineyard:

"I think his hair gel is interfering with his brain function."

In response to the Governor's comments, DeSantis said, "I  think his hair gel is interfering with his brain function."

Both Newsom and DeSantis have emerged as possible presidential candidates in the 2024 election, but neither of them have confirmed whether or not they're planning on launching a presidential bid.

For months, DeSantis and Newsom have exchanged words, criticizing each other over their respective leadership efforts.