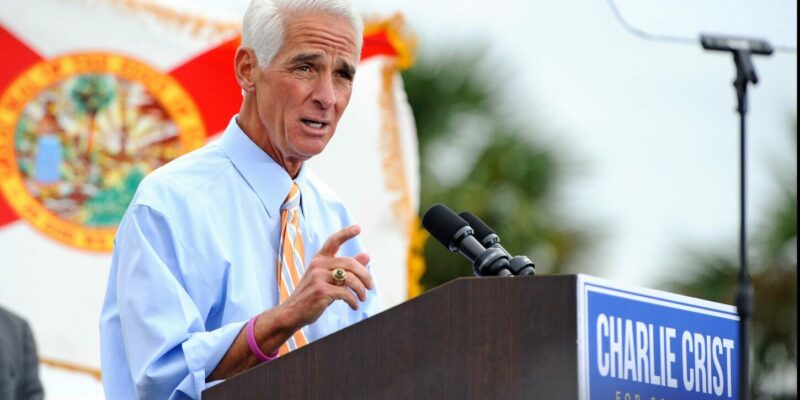 Florida Rep. Charlie Crist (D) is warning that Florida Governor Ron DeSantis (R) does not want to debate him, and it could have something to do with the governor's views on abortions.

Taking to social media, Rep. Crist posted a series of videos, directing criticism at Republicans and DeSantis over their anti-abortion views. Crist accused DeSantis of refusing to debate him.

This week, South Carolina Senator Lindsey Graham (R) introduced a bill that would enact a ban on abortions after  15 weeks of pregnancy. While Republicans have praised the effort,  Democrats have vocally opposed it.

"I  think we should have a law at the federal level that would say, after 15 weeks, no abortion on demand except in cases of rape, incest [or] to save the life of the mother," Graham said, adding that "that should be where America's at."

Reproductive freedom is on the ballot.

DeSantis & Ashley Moody have made it clear they'll stop at nothing to try & take it away. So this Friday, we are taking it to their doorstep.

Join us for our Choice is the Choice Day of Action in Tallahassee below! https://t.co/Cb3HNjGDEZ

As such, the gubernatorial hopeful has expressed enthusiasm over debating the Florida Governor, but he alleges that DeSantis does not want to debate him.

In a video posted on social media, Crist questioned, "why are you refusing to do the only statewide broadcast debate, Ron?"

"Voters deserve to know why you want a total abortion ban without exceptions for rape and incest," the former Governor of Florida added.

This week, Crist was endorsed by Florida Now, a group dedicated to preserving pro-choice policy.

In response to the endorsement, Crist further commented on the issue, saying that the Governor "is reversing decades of progress Florida has achieved to secure reproductive freedom — but we can stop him in November."

Ron DeSantis is reversing decades of progress Florida has achieved to secure reproductive freedom — but we can stop him in November.

Thank you, @Florida_NOW, for your support in our fight to defeat Ron’s political extremism & preserve this fundamental protection for all. pic.twitter.com/YFcOIQW4LA