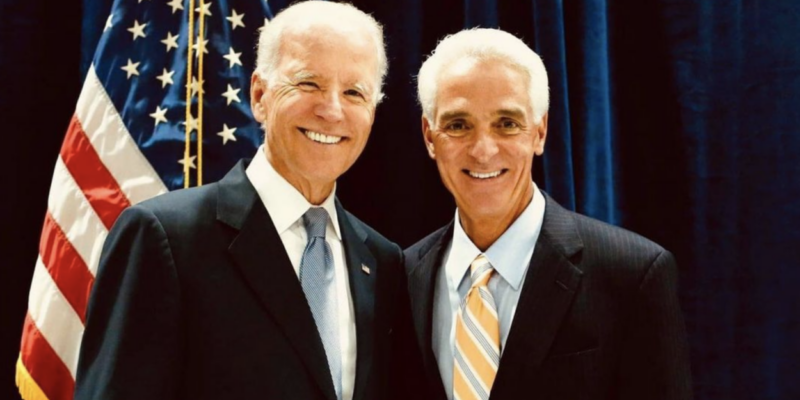 The Republican National Committee (RNC) has recently sent out a press release calling Florida gubernatorial candidate, Rep. Charlie Crist (D-FL) the “Joe Biden of Florida.” Rep.Crist, who has a longer political career than his Democratic primary opponent Commissioner of Agriculture Nikki Fried (D-FL),  is known by most as the establishment candidate. Crist also served as Governor of Florida (as a Republican) and has been in politics since becoming a state senator in 1993.

Julia Friedland, the Florida Communications Director for the RNC writes in the press release a not-so-fond comparison between the two men.

“Over the many years of their failed careers, where their paths have crisscrossed on multiple occasions, Charlie Crist and Joe Biden have bonded over shared interests: being fake, ineffective and flip-flopping on every issue under the sun. Despite their years-long bromance, Charlie Crist is now trying to distance himself from his “great” friend Joe Biden who he has such “love” for: One month into Joe Biden’s term, Crist said Biden ‘will end up going down in history as one of the best we’ve ever had.’”

After changing parties, Crist is now flip-flopping against the party’s leader that welcomed him in 2012.

The RNC goes on to report that Crist said that he “wouldn’t commit to having Biden…campaign with him this fall” even though the two have campaigned with each other in the past:

“Florida has already seen the Biden playbook: take no accountability for failures, laugh at the suffering of American families, leave the border wide open and drain the wallets of hard-working Americans. As Joe Biden ‘plumbs new depths,’ Floridians have made clear they have no interest in ‘the Joe Biden of Florida’ Charlie Crist.”

Florida Democrats will ultimately decide if Crist will even be their candidate to go against Gov. Ron DeSantis (R-FL), and then the state of Florida as a whole will decide if they want to make Crist their next governor on Tuesday, November 8th.