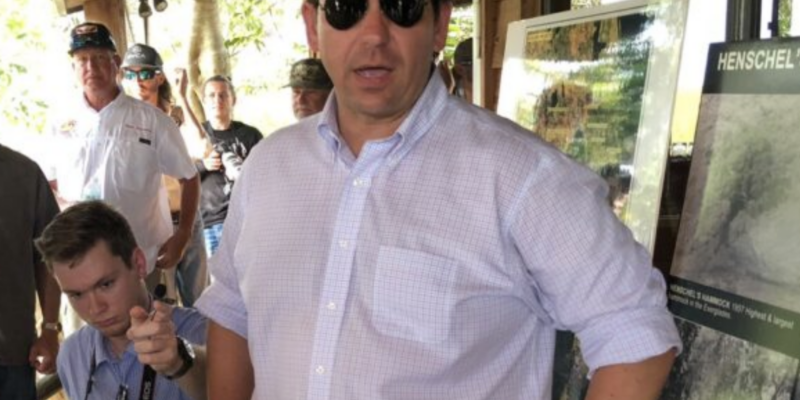 When then-Rep. Ron DeSantis (R) was considered one of the most conservative members of the U.S. House of Representatives just 4 years ago, no one would have thought that he would become the first “Green Governor” in Florida’s history focused on environmental issues."

During the Republican gubernatorial primary race in 2018, candidate DeSantis shocked Floridians by taking a bold and “green” position on the environment, particularly taking a hardline stance in support of the Everglades Restoration.

DeSantis took several strategic trips to the Everglades, some with Broward County’s Alligator Ron Bergeron, a land developer who got his nickname for his Everglades philanthropy. Now, Gov. DeSantis has continued to champion the collective effort to clean up Florida’s waterways and to restore the Everglades ecosystem.

"Listen, this year, the Governor recommended more in his budget for Everglades restoration funding than any governor has in history.  Additionally, we have great leaders in Speaker Sprowls and President Simpson who know the importance of Everglades funding and are great supporters,” said Iarossi.  The three of them are in lockstep to ensure that we have a restored Everglades, but also clean water everywhere in our lakes, our streams, and our other coastal areas throughout the state, that's huge for us."  I’m not sure the average Floridian realizes how good we have it with our current and future legislative leaders.”

DeSantis’s water clean-up efforts have also been acknowledged by Progressive Democrats like Sen. Shevrin Jones, one of DeSantis’s harshest critics in the state legislature.

“With more to be done, I will say that Governor DeSantis has been consistent on environmental issues, but he can’t just stop at water issues, there are issues like lead in water in communities, air quality, protecting endangered species, etc. - these are other environmental issues that Gov. DeSantis can/should champion,” said Sen. Jones in a statement to The Floridian.

In November 2021, Gov. DeSantis announced his environmental budget proposals, proposals that include over $960 million allocated for Everglades restoration and another $559 million to help state and local communities have the resources in place to deal with the rise in the sea level and the protection of other water resources.

“When I took office, I outlined a bold vision to protect Florida’s environment, and we have not only kept the promises we made, we’ve exceeded them,” said Governor Ron DeSantis. “We are excited to announce this historic support for Florida’s environment, Everglades restoration, and our water resources. We have seen great results so far, but we are not yet at the finish line. It’s nice to see so many coming together to support these initiatives. We will be pushing hard to continue the momentum this legislative session.”