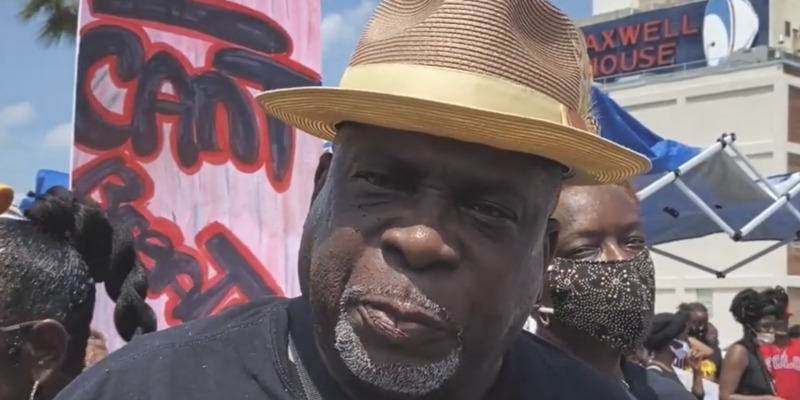 The “respectable” Frazier called Gov. DeSantis an “enemy of the public” and

was arrested after refusing to leave the press-only event, saying that he was there to hold Gov. DeSantis accountable and that he was allowed to be there because the event was being held in a public space.

“The extremely disturbing events we saw take place today, arresting an individual for simply asking to speak with the Governor at a press conference held on government property discussing public health policy, were a realization of our fears surrounding HB1’s enactment. HB1 set a dangerous precedent, disallowing individuals from speaking their minds and peacefully gathering – freedoms guaranteed by the First Amendment,” stated Commissioner Fried. “I hope that any charges brought against Mr. Frazier, a respected civil rights activist in the community, are swiftly dropped and apologies issued for infringing on his rights. The Governor should be ashamed.”

“He’s a well respected civil rights leader AND journalist. Not to mention he’s disabled and wasn’t allowed to use his wheelchair to leave the site,” stated Rep. Nixon.

The Florida Republican Party of Florida (RPOF) touched on the fact that  Frazier has been arrested in the past.

“This isn’t the first time Ben Frazier is led out of a room in handcuffs. He is a well-known activist and Democrat with a criminal record who tried to stand in the way of residents learning about life-saving COVID treatments,” stated the RPOF on Twitter.

The Republican National Committee (RNC) also chimed in, saying that Frazier’s arrest fueled the narrative that Democrats have only been trying to run interference to DeSantis’s effort of “protecting Floridians.”

“Voters will remember this: while Governor DeSantis is doing his job and protecting Floridians, Democrats have done nothing but push protests and partisanship.” stated RNC Spokeswoman Julia Friedland

Shortly after his latest arrest, The Floridian compiled public records of Frazier’s past and extensive criminal history. The criminal records were cross-referenced with his Date of Birth.

Aside from a slew of criminal traffic complaints filed against him over the years, Frazier was sentenced to 18 months in prison (DOC 292917) after pleading guilty to a second-degree felony Grand Theft back in 1998.

Frazier was also arrested in the 1990s for Petty Theft, a second-degree felony for Robbery, and for Solicitation of Prostitution.

In addition, Frazier was arrested in 2004 for DUI, DUI with Damage, and reckless driving.

Frazier has also been arrested for Trespass in Structure or Conveyance, Resisting Officer W/O Violence.

DeSantis’s press secretary, Christina Pushaw, released a statement outlining that the event was a “press conference” for only “credentialed media” and asserted that Frazier had the right to protest, just not to “trespass in a secured facility in order to disrupt a press briefing.”

“The press conference is for credentialed media to cover information from the governor’s office and state leaders that is important for the public to hear. Mr. Frazier is an activist, not a member of the press. Every citizen has the right to protest in public places -- but not to trespass in a secured facility in order to disrupt a press briefing and prevent information from being conveyed to the public,” stated Pushaw.

Cruz: Republicans Have 'Multiple Grounds to Consider' Impeaching Biden After Winning Back House in 2022