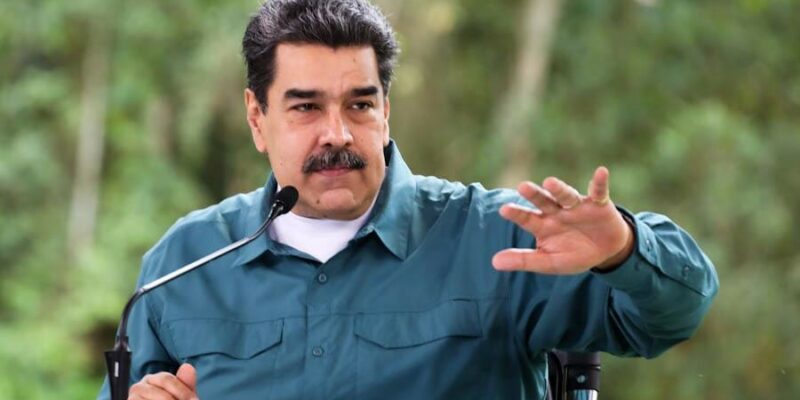 When the Trump White House first began to impose strict economic sanctions against Nicolas Maduro’s regime in Venezuela, the consensus around the world was that Venezuela would be brought to its knees, and Maduro would be ousted from office.

But while the sanctions did cripple Maduro economically, he found a way of getting by without the help of the U.S. and European countries by turning to the new “Axis of Evil”—Russian, China, and Iran.

Venezuela’s international allies Russia, China, Iran, and India, have been intricately involved in helping Maduro hang onto power by showing him how to evade sanctions.

This was a central topic of discussion during a recent roundtable forum hosted by the Wilson Center, where an independent and non-partisan group of policymakers and civic leaders, presented their new book, “Venezuela’s Authoritarian Allies: The Ties that Bind.”

There was general agreement amongst the experts that the current U.S. sanctions regime must be revised, as these dictatorial nations have created an alliance of sorts that manifests itself in collective knowledge and training on how to avoid sanctions, or like James Bosworth said, the “U.S., unfortunately, in this process, created an Axis of Sanctions.”

He added that existing sanctions have given countries like China and Iran “a reason to form alliances and form financial ties” that “allow them to evade those sanctions because any individual country … could be punished, but together they have the ability to conduct that trade” and form those “financial relationships.”

Bosworth believes that, in reviewing its current sanctions regime, the U.S needs to “look at the super facilitators like Alex Saab,” the Colombian businessman who's also said to be a 'financier' and 'front man' for Maduro and who’s awaiting extradition to the U.S from Cape Verde.  “The role of the super facilitator is just as important as country relationships.  So we need to go after the super facilitators,” he said.

To Vladimir Rouvinski, there is no other extra Hemispheric power of similar importance to Venezuela, than Russia. “Russia’s participation has been key in maintaining Maduro in power,” he said. “It is [Venezuela’s] largest ally on a global scale.”

Although he believes that “Russia is not prepared to invest as much in Venezuela as the USSR did in Cuba,” he says that Russia can’t simply pack up and leave as the oil production assets it owns are significant.

According to Vladimir, these assets can prove to be a key “element of negotiation with the U.S. Putin is very isolated and the cost to keep Maduro in power is too high.”

Michael Penfold reminded the audience that Russia has benefited handsomely from U.S. sanctions on Venezuelan oil as it has now become “the No. 3 supplier of crude to the U.S.”

India also took a much larger role in Venezuela’s oil sector after U.S. sanctions were imposed.

According to Hari Seshasayee, India has become somewhat of a ‘commercial lifeline”  for Maduro’s regime, having imported about “$26 billion” in oil from Venezuela over the past 5 years.

“India was by far the largest importer of Venezuelan oil in 2019 after U.S. sanctions took effect and last year in 2020, about one-third of Venezuela's oil exports went to India,” said Seshasayee, adding that, unlike China, “India is a very big provider of hard currency” to Venezuela.

The reason why this is significant is that in the past, Venezuela would trade its oil as a form of debt repayment to Russia and China. So because Venezuela has no debt with India, Maduro finds himself in the midst of a cash bonanza of sorts.

China is by far the biggest player in the Western Hemisphere, and its long-term and financial relationship with the late-Dictator Hugo Chavez and his successor Nicolas Maduro has been predicated on loans made to Venezuela that were backed by the country’s oil capabilities and reserves.

“China, despite the fact that they privileged Venezuela with very large loans, particularly aimed at the oil and gas sector, it gradually shifted away … particularly once they were able to get into other countries in the region and as as the crisis in Venezuela started to become more difficult,” stated Penfold.

Penfold also said that one way that China got around U.S. sanctions was to have Venezuela repay its debt with oil, which is “something allowed under sanctions rules” and then in August 2019, China started buying Venezuelan oil, disguising it through third-party brokers in Malaysia and other developing nations.

“China's privileging its long-term interest in Venezuela, which is to keep the relationship going but using different tools in order in the short term to support the regime through other means and without losing sight that there the real interest is in— the oil sector.”

Now, we all know that Maduro would be nowhere without Cuba and its intelligence, security, and military support.  But by the same token, “Venezuela is a lifeline to Cuba, the way that India and China are to Venezuela,” said John Polga-Hecimovich of the U.S. Naval Academy, as Cuba is totally dependent on Venezuelan oil subsidies.

For his part, Florida International University’s Brian Fonseca, believes that from a U.S. foreign policy perspective, Cuba and Venezuela have been put together in the same bucket but they have “very different geopolitical context,” and “we’re doing ourselves a disservice by lumping them together,” adding, “by doing that, we are pushing them further to work together to survive.”