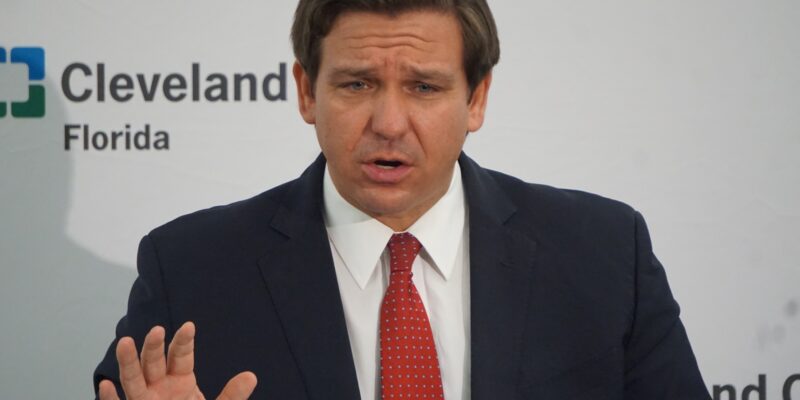 It appears as if Florida Gov. Ron DeSantis and Texas Gov. Greg Abbott are following in the footsteps of their predecessors, former Governors Rick Scott and Rick Perry, by jabbing at each over whose state had the business edge, and whose sports teams did the best. Both Gov. Abbott and Gov. DeSantis oppose transgender athletes from competing in women’s sports.

During Laura Ingraham’s “Red State Trailblazers” segment on her nightly Fox News program, the issue of Transgender sports came up and DeSantis was asked about his position on the issue, and if he would sign into law a bill to ban Transgendered or “biological males” from competing in women’s sports that recently passed in the Florida Legislature.

Gov. DeSantis brought up his two young daughters to make his case for supporting the controversial measure.

“They are both very athletic, and we want to have opportunities for our girls,” said DeSantis. “They deserve an even playing field. And that’s what we are doing.”

“I look forward to signing that bill into law,” he concluded.

Earlier in the day, Rep. Carlos Guillermo Smith (D), an openly gay legislator that opposed the Republican bill, went after Rep. Chris Latval (R) over his support for the newly-passed bill.

“Unfortunately, Chair @ChrisLatvala won’t fix this mess. He CREATED it. His obsession with expelling transgender kids from athletics trumped everything else. GOP legislators were clapping and high-fiving its passage. They’re pushing @GovRonDeSantis to sign SB 1028 with impunity,” tweeted Rep. Smith.

Not to be one-upped, Texas Gov. Abbott was asked about the NCAA threatening to cancel both states from sports, prompting Abbott to poke fun at the rest of the country.

“What if they don’t participate in Florida and Texas, well are you going to be able to have sports events anymore in the United States,” quipped Abbott.

DeSantis then decided to pound his chest a bit, bragging that Florida hosted the first full capacity UFC event in Jacksonville last Saturday.

Both governors laughed at the back and forth, chest pumping moment.

DeSantis then proceeded to credit all of the governors on the stage with him for their hard work in making sure “youth sports happened.”

We all worked hard to make sure youth sports happened. We all did that last summer. We had kids moving from other states to Florida to play sports,” said DeSantis