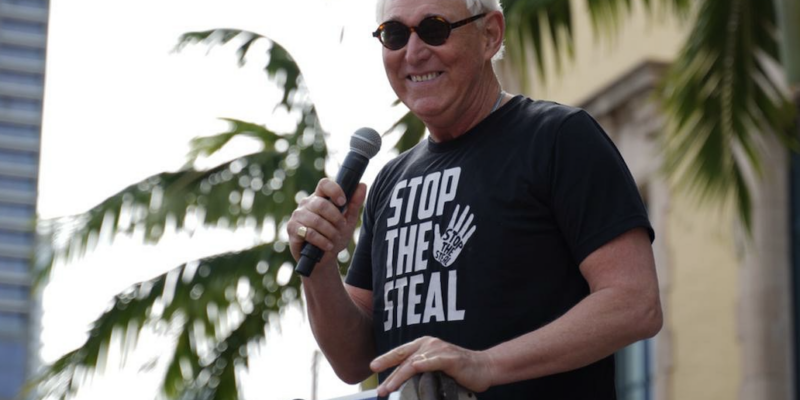 South Florida and the nation were rocked when in the predawn hours of January 25, 2019,  when twenty-nine heavily armed FBI agents raided Longtime Trump advisor Roger Stone's Fort Lauderdale home. The agents arrived in 17 armored vehicles and two FBI boats moored on the canal behind Stone's home. Even more shocking was the fact that CNN was the only media outlet allowed on the sealed dead-end street Stone lived on, with the CNN camera crew arriving just 14 minutes before the FBI.

Stone's attorneys have obtained a draft copy of stones indictment sent by text from a CNN correspondent sent at 6:22 am which actually showed in the metadata tag that the creative indictment was written by Andrew Weissmann, a federal prosecutor with a long history of corruption and who's misconduct caused the verdict in the Enron case to be overturned. Since Stone's indictment was not unsealed until 8:55 AM the document in question proves that Weissmann leaked the sealed indictment to CNN in violation of the law. The "over the top" arrest of Stone for the first time non-violent white-collar crime of lying to Congress cost taxpayers $1.1 million - all staged for the benefit of CNN.

For veteran Republican strategist Roger Stone, a 30 plus year associate of former president Donald J Trump, the witchhunt conducted by Special Counsel Robert Mueller and the fallout from the Soviet-style show trial Stone was subjected to last year never seems to end.

After the shocking corruption by the jury Forewoman in that trial was exposed and declassified documents proved the illegitimacy of the Mueller probe as well as the fabricated premise under which that witch hunt was opened, President Donald Trump commuted Stone's draconian prison sentence in July and granted Stone and unconditional Presidential pardon just before Christmas.

For more than two years the so-called" mainstream" media led by CNN but including MS NBC, NBC, CBS, ABC the New York Times the Washington Post, the Wall Street Journal the New York Daily News, the Business Insider, and others, insisted that Stone had worked with  Russian intelligence to interfere in the 2016 American presidential election.

Stone was also accused of coordinating the release of stolen data embarrassing to Democrat nominee Hillary Clinton with Wikileaks and their publisher Julian Assange.

Based on over 18 months of illegal leaks from Mueller's dirty cops these very same news outlets insisted that Stone would ultimately be charged with treason, espionage, conspiracy against the United States, mail fraud wire fraud, money laundering, and various cybercrimes. In fact, Mueller's prosecutor's insistence in their applications for search warrants in Stone's case that they had a "probable cause" to charge stone with these serious legal infractions was a fraud.

Despite an unlimited multi-million dollar budget and unlimited legal authority and scope to investigate any matter whatsoever, Mueller's prosecutors reviewed over 1 million email records, four years of phone records, and hundreds of thousands of text messages as well as badgering as many as 31 of Stone's current or former associates before the grand jury, Mueller's cabal could find no evidence whatsoever that Stone had either colluded with the Russians or played any role in the release of the WikiLeaks disclosures.

In fact, now unsealed documents prove that the investigation into Stone was actually approved at least three months after Muller had already concluded that there was no collusion between Russian intelligence and the Trump campaign. Acting Attorney General Rosenstein denied under oath to the Senate judiciary committee that he had approved the investigation into the veteran Republican political consultant when in fact Rosenstein's signature is on the authorization of the Stone investigation.

In other words, Rosenstein lied under oath to Congress, the exact crime Stoned was charged with after Mueller's investigators came up empty-handed in finding any actual interaction between stone, the Russians and WikiLeaks.

On November 3, 2020, at the stroke of midnight, the US Department of Justice released the long-hidden unredacted sections of Mueller's final report Admitting that the Special Counsel had found "no factual evidence" of Stone's involvement with the Russians, Wikileaks or their publisher Julian Assange. Not surprisingly virtually none of the major media outlets who had aggressively insisted that Stone was a Russian asset who had collaborated with Wikileaks to disseminate allegedly hacked emails from Hillary Clinton reported their error. Only Buzzfeed reported that Stone was " vindicated".

Rather than disappear from the political scene Roger Stone campaign vigorously for President Trump's reelection and was among those who called for greater examination of the 2020 presidential election results based on an extraordinarily high number of anomalies and other irregularities in the vote count.

In fact, Stone Supported the "Stop the Steal" movement speaking to rallies in Tampa and Miami as well as speaking in Washington on January 5th.

Although there is documented proof that Stone made no public appearances on January 6th, was not on the Ellipse, did not march to Capitol Hill, was not on the Hill and was not at or in the Capitol on January 6th, because Stone had been protected by a voluntary security detail from the Oath Keepers, an organization of current and retired law enforcement officers and military veterans sworn to uphold the Constitution,

Because some members of the Oath Keepers had been charged in the capital insurrection, ABC, CNN, the Washington Post, and the New York Times all used the "guilt by association" technique to imply that Roger Stone was somehow involved in the illegal actions at the US Capitol on January 6. To date, no evidence has emerged that would prove that Stone was involved or had advanced knowledge of the riot that took place at the US Capitol that day.

Any statement, claim, insinuation, or report alleging, or even implying, that I had any involvement in or knowledge, whether advance or contemporaneous, about the commission of any unlawful acts by any person or group in or around the U.S. Capitol or anywhere in Washington, D.C. on January 6, 2021, is categorically false." was Stone's reply.

Stone requiring private security is unquestionable. Since the time of his indictment Stone and his family have been plagued with death threats as well as public altercations when the Republican strategist is recognized. Only weeks before we reported on an incident where Stone's 72-year-old wife was assaulted in a politically motivated attack outside their home.

There is little doubt that the current mainstream media drumbeat smearing Stone is based on liberal fury that Stone escaped death in a federal prison once the fabrication of the charges against him became clear and the epic corruption of his DC trial was evident., Stone has no choice now other than to vigorously rebut the new baseless charges against him.

How ironic that the very same news organizations that insisted repeatedly that Stone was a traitor in league with WikiLeaks and then refused to report the conclusion of the Mueller investigation that there was never any evidence found to support this charge against Stone are the very same people now insisting that he was involved in the January 6 riot without a shred of corroborating evidence.