The Republican Party of Florida recently mailed out a political advertisement accusing Democrat vice presidential nominee Sen. Kamala Harris of having deep ties with the Council on American-Islamic Relations (CAIR), the group who has once designated a co-conspirator in a federal terrorism case in Texas, and who has seen many of its leaders express anti-Semitic and anti-Israel sentiments since its founding back in 1994.

The Floridian discovered that Sen. Harris endorsed CAIR in 2018, asking the group to “accept” her “gratitude and admiration” for their “tireless work to promote peace, justice, and mutual understanding.”

CAIR’s current Florida leader Hassan Shibly, who is vehemently anti-Israel, once tweeted that “Israel & it’s supporters are enemies of God and humanity.” Shibly is also on record of refusing to denounce Hamas and Hezbollah as terrorist organizations, and for calling the Hamas terror tunnels found in the Gaza Strip  as “being in defense of Palestine.”

God as my wittiness, Israel & it's supporters are enemies of God and humanity! How many more children must Israel kill 4 U 2 C?#Gaza

While Rep. Murphy didn’t specifically mention the Pulse nightclub mass shooting that was carried out by a radical Islamist that swore allegiance to ISIS, she did acknowledge their community service efforts in central Florida. 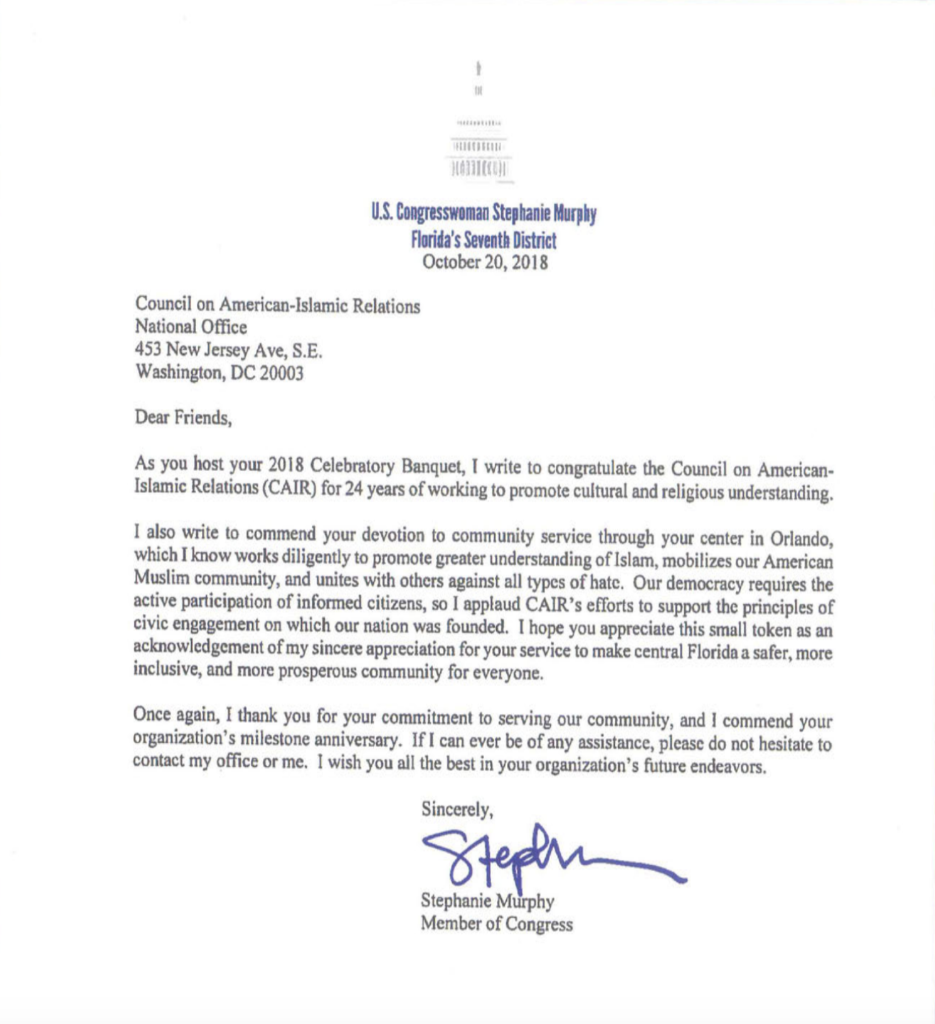 “I also write to commend your devotion to community service through your center in Orlando, which I know works diligently to promote greater understanding of Islam, mobilizes our American Muslim community, and unites the others against all types of hate,” stated Rep. Murphy. “Our democracy requires the active participation of informed citizens, so I applaud CAIR’s efforts to support the principles of civic engagement on which our nation was founded on. I hope you appreciate this small token as an acknowledgment of my sincere appreciation for your service to make central Florida a safer, more inclusive, and more prosperous community for everyone.”

Earlier this year, a petition signed by over 9,000 Americans asked that American-Muslim Rep. Ilhan Omar (D) and other members of Congress take back their letters of support for the alleged anti-Semitic group.

"Although CAIR leaders claim to oppose antisemitism, they routinely put blatantly antisemitic speakers front and center at some of their biggest events, including their recent 25th-anniversary gala,” stated the petition. “No organization that truly opposes antisemitism would highlight such prominent bigots," the petition text states.

Neither Rep. Murphy nor Rep. Soto supported Rep. Omar’s pro-BDS movement measure in the house but did vote alongside a very single member of Florida’s congressional delegation in support of Israel by voting for H.Res. 246, a measure that supports “Opposing efforts to delegitimize the State of Israel and the Global Boycott, Divestment, and Sanctions Movement targeting Israel.”