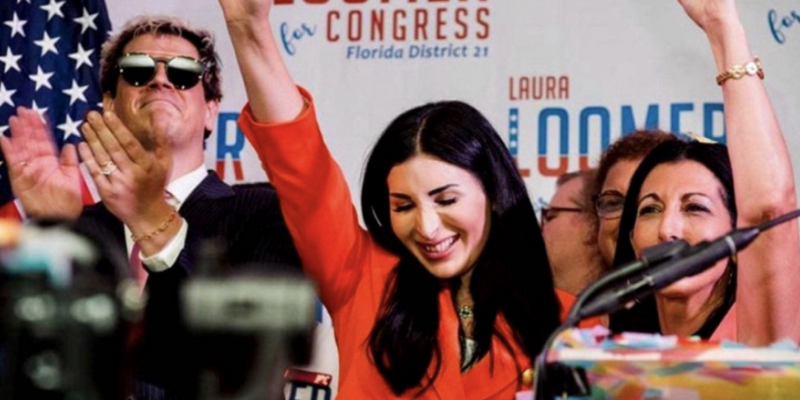 President Donald Trump was watching the results on Florida’s all-important Republican primary race last night and once the final results were posted, he congratulated those winners, including Laura Loomer who he retweeted mentions of her several times.

Loomer’s campaign was targeted for political assassination by dark outside groups and the entire field of primary opponents and their following.

This race was ugly, but in the end, Loomer crushed her opponents.

That “puppet” Trump speaks of told the Palm Beach Post that she didn’t believe Loomer’s “values” did not “reflect the values” of the congressional district she currently represents.

“I can tell you her values do not reflect the values of this district,” Frankel said of Loomer. “I have lived here over 40 years, and the people here stand up against white supremacy. She’ll have to disguise herself if she’s going to get votes.”

Harsh thoughts, but Loomer’s strategy against Frankel will most-likely be to target her voting record.

Considering that her voting record is in line with Rep. Ilhan Omar (D) 95% of the time, and with Speaker Nancy Pelosi 100%, Frankel may want to “disguise” her votes from voters.

Frankel has yet to denounce Rep. Omar’s past anti-Israel remarks. The Floridian reached out to Frankel months ago for comment but still have not heard back from her.

Loomer, the “Joan of Ar of the conservative movement,” close friend and confidante, Roger Stone.

“Lois Frankel doesn’t know it yet, but she is going to get Laura Loomered,” said Stone, adding that  Loomer the “Joan of Arc of the conservative movement.”

“I’m going to need all of you to win in November,” she Loomer

Considering that this congressional district is that of President Trump, expect the political bats, picks, pitchforks, and knives to come out against Loomer from the “NeverTrumpers” and base of the Democratic Party.

Great going Laura. You have a great chance against a Pelosi puppet! https://t.co/pKZp35dUYr