With absentee ballots beginning to hit doors this weekend in Florida’s primary election, candidates will be continuing to press donors for campaign contributions and politicians for endorsements.

Republican congressional candidate Jessica “Jessi” Melton, who recently announced that Senator Rand Paul had endorsed her campaign, has made the false claims that Gov. Ron DeSantis and the Republican Jewish Coalition (RJC) are supporting her congressional efforts.

Melton’s campaign stated DeSantis’ alleged support for her on a fundraiser announcement that states, “she has most recently been endorsed by Senator Rand Paul and has the support of Governor Ron DeSantis.”

But just like when  Vice President Joe Biden falsely said that the NAACP endorsed him, the group came back and denied doing so.

“The Governor is not aware of this candidate or her campaign and is solely focused on COVID,” said DeSantis’ close and long-time aide.

The aide said that he had spoken to Gov. DeSantis about the issue earlier in the week.

Here is the actual fundraising letter: 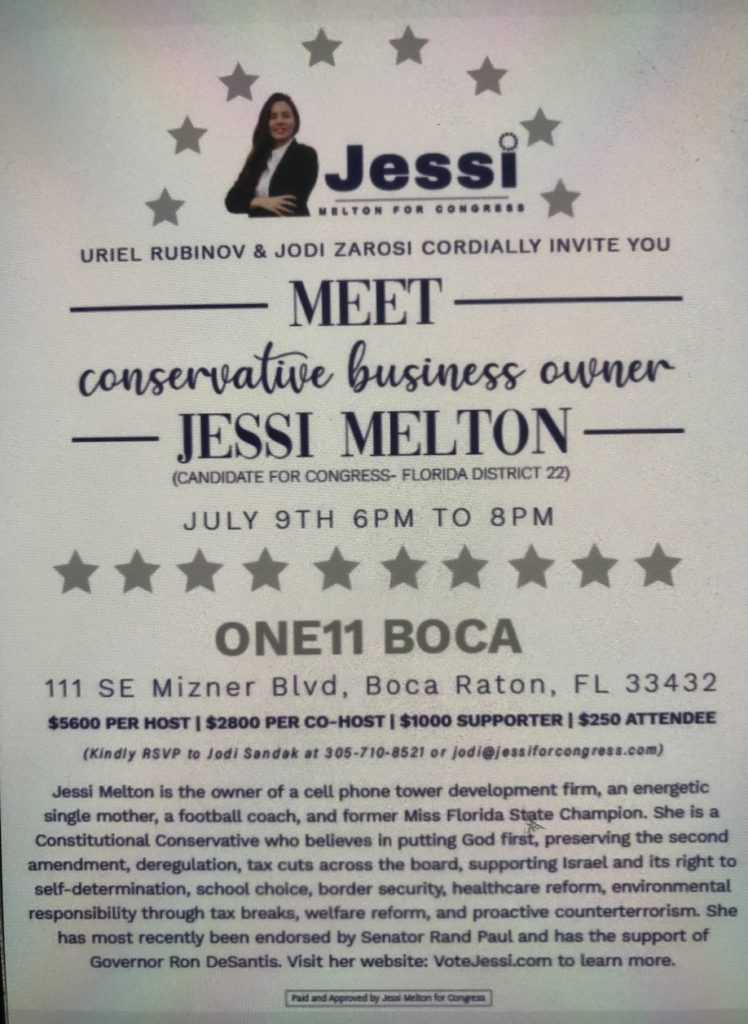 We reached out for comment to Melton’s finance director, Jodi Sandek, whose name is listed as the point of contact on the invitation, but she has not responded.

Early in the day on Wednesday, Melton appeared on the Mike Essen radio show, where she made an effort to explain her recent tweet in support of famed anti-Semitic actor Mel Gibson. Melton tweeted that Winona Ryder’s accusation that Gibson asked her if she was an “oven-dodger” was nothing more than hearsay. Melton doubled-down on the “hearsay” claim before defending Gibson again, saying that the actor was being attacked in the media because of his supposed efforts to expose pedophilia in Hollywood.

The tweet in question does not mention pedophilia, just her defense of Gibson for the anti-Semitic allegation made against him.

“I am supported by the RJC, I am a Zionist, I’ve spent a lot of time in Israel, I’m a staunch supporter of Israel,” stated Melton.

Because Melton has not publicized either the support from DeSantis or the RJC on any of the social media platforms that she uses, we reached out to the RJC for confirmation of the show of support.

The RJC contacted The Floridian late on Wednesday, where their spokesperson said that this was the first time he had heard of Melton and that we should go to the group’s political action committee’s endorsement page, and to look at their donation payouts to get the answer we needed. After, searching both Open Secrets.org and the PAC, we could not find any mention of support for Melton or donations made to her campaign.

One of Melton’s primary opponents, Darlene Swaffar, who has garnered the endorsements of the Greater South Florida Chamber of Conference and the Republican National Hispanic Assembly of Florida, questioned the millennial’s “integrity and character” in a statement. Swaffar also said that she ensured the endorsements were in writing before announcing them.

“For Ms. Melton to be misrepresenting her endorsements is a reflection of integrity and character,” said Swaffar ” If this is a window to how she runs her campaign, imagine what she could do in Congress.   I along with my community are tired of dirty politics.”

Fran Flynn and Jim Pruden are also running in the are contested Republican primary race.