A new internal poll conducted by the Kat Cammack for Congress campaign shows that both Cammack and businessman Judson Sapp are “in a statistical dead heat” in the contentious and crowded Republican congressional race to replace retiring Rep. Ted Yoho (R).

According to the live telephone operator interview poll, which was commissioned to WPA Intelligence, and carried a margin of error of ±4.9%,  of the  405 Republican primary voters surveyed, 12% supported Sapp and 10% supported Cammack, while 60% were still undecided.

The other six names on the ballot all polled in single digits. Here is a snapshot of Cammack poll with some favorable claims the campaign makes. 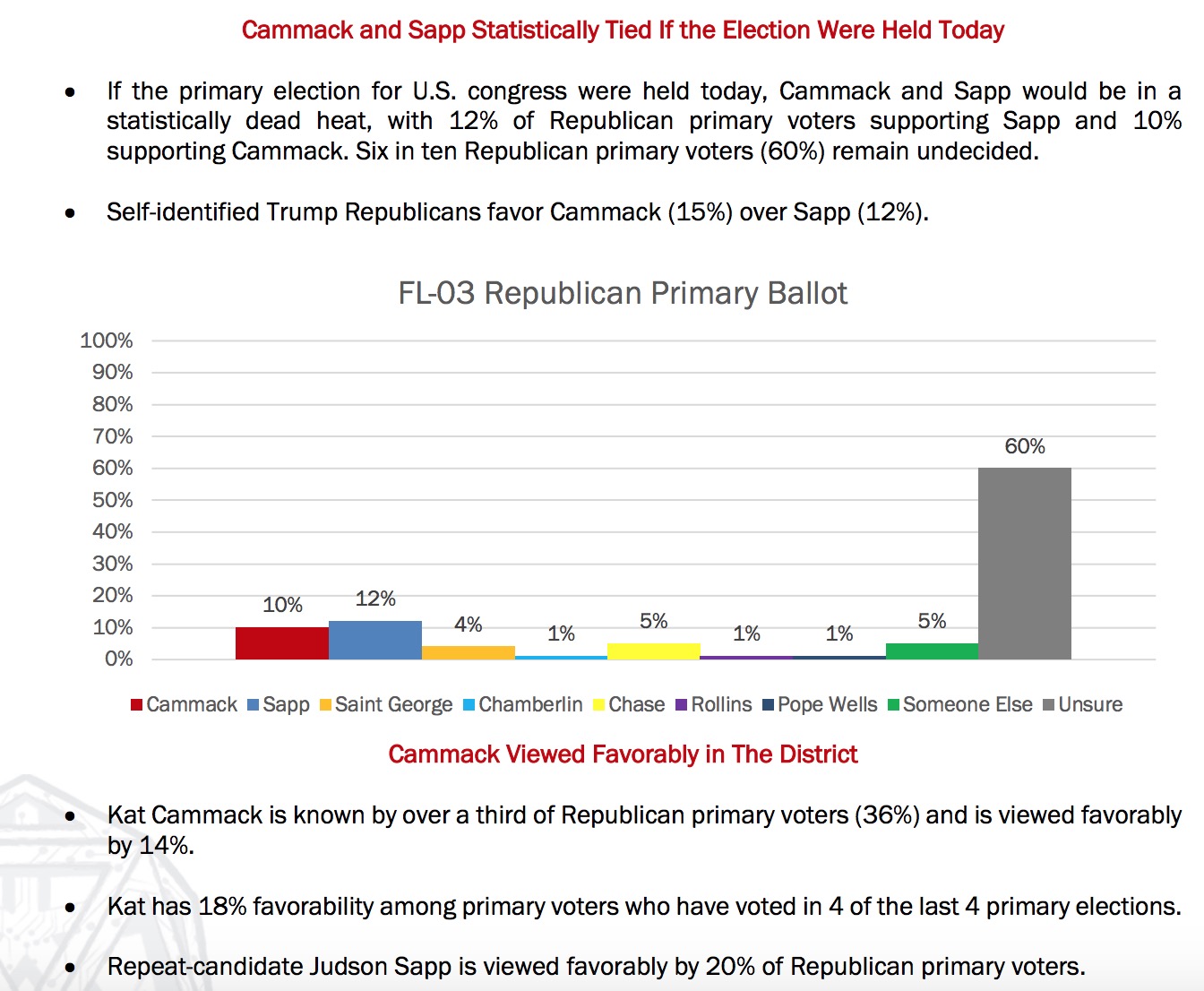 A previously internal poll released by the Judson Sapp for Congress campaign showed that Sapp was leading Cammack by 12%. Sapp’s poll also showed that 71% of the 400 surveyed were undecided and Cammack was only polling at 2.5%

Here are some more claims the Cammack campaigns makes:

96% Approval Rating in the Republican Party. Thank you!

Cammack’s campaign consultant Derek Dufresne believes that this poll in an indicator that she is in a very strong position with two months left before Florida’s primary election.

"Kat Cammack is in an incredibly strong position as the race in FL-03 heats up and the candidates at the top of the field stand out from the large pack of ten Republicans competing in the primary to fill Congressman Ted Yoho's seat next year,” said Dufresne “She is in a statistical tie for first in polling, is one of the top candidates with regards to fundraising, and leads the field in grassroots endorsements. There is a long way to go between now and Election Day, but momentum is clearly on Kat's side as we head into the summer.”

Dufresne then pivoted and took a shot at Sapp’s popularity.

"It is also important to note that despite having his name on the ballot less than two years ago and spending hundreds of thousands of dollars to get 26% of the vote, repeat candidate Judson Sapp hasn't even closed the deal with half of those who voted for him last time around. It is clear that the voters of FL-03 are looking for a fresh conservative candidate who will stand with President Trump and fight for their values in Congress -- and Kat Cammack is well-positioned to be that woman."

Sapp’s consultant Brian Graham countered, questioning the legitimacy of the poll and lack of internal numbers and the absence of the questions posed to voters.

“Kat Cammack’s poll does not match our internal polling.  It’s very hard for me to comment on numbers when the very questions the numbers are derived from are hidden by Mrs. Cammack,” said Graham

One this is for sure, President Trump will carry this congressional district, so whoever is able to win over president's Republican supporters, will win the race.

The back and forth between the Sapp and Cammack camps continues as Dufresne responded to Graham.

“I can certainly understand why repeat candidate Judson Sapp’s team is incredibly worried by these numbers. I would be if I were in their shoes, too. However, I’ll certainly put the accuracy of our survey, done by the same firm that does polling for Senator Ted Cruz, Senator Mike Lee, the NRSC, the Club for Growth, and countless other organizations and candidates, up against a ‘poll’ that was conducted directly by Judson’s Sapp’s campaign consultant’s own firm. There is no legitimate comparison.”

“Someone seems awfully triggered that I pointed out Mrs. Cammack is hiding the questions of her new poll, which does make it difficult to comment on. I’m not getting into a petty argument with some DC consultant regarding the lack of data provided.”