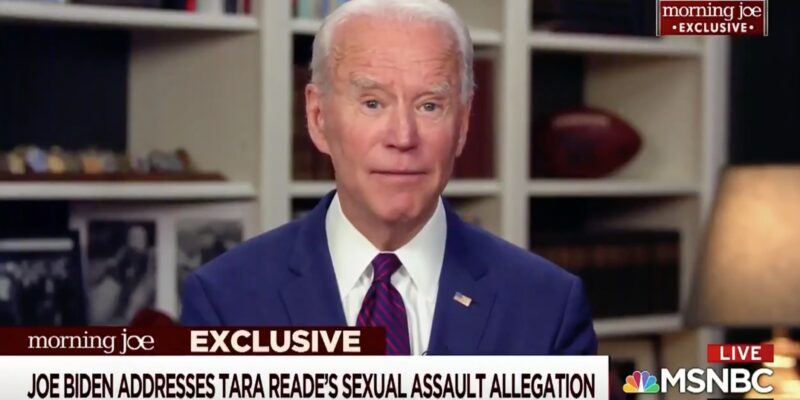 “No. It is not true…it never happened,” said Biden

To Brzezinski’s credit, the anchor pressed Biden, and at one point, Biden appeared to take issue with her questioning.

Biden said that he would instruct the Senate to release any complaint against him filed that may be found in the National Archives, but that any files on him at the University of Delaware were not relevant.

Biden added that he was “confident” a complaint didn’t exist, but then said that to the best of his knowledge, there were “no complaints made” against him.

“Best of my knowledge there have been no complaints made against me,” said Biden

Biden repeated that he did not sexually assault Reade and added that he was not going to “question her motive” for accusing him of sexual misconduct, nor was he going to attack her.

“The truth is what matters. And in this case, the truth is false.”-Joe Biden

About an hour before his 8 am MSNBC appearance, Biden’s campaign put out a statement about the allegation.

Here is an excerpt of the statement where he addresses the allegation:

So I want to address allegations by a former staffer that I engaged in misconduct 27 years ago.

They aren’t true. This never happened.

While the details of these allegations of sexual harassment and sexual assault are complicated, two things are not complicated. One is that women deserve to be treated with dignity and respect, and when they step forward they should be heard, not silenced. The second is that their stories should be subject to appropriate inquiry and scrutiny.

Responsible news organizations should examine and evaluate the full and growing record of inconsistencies in her story, which has changed repeatedly in both small and big ways.

But this much bears emphasizing.

She has said she raised some of these issues with her supervisor and senior staffers from my office at the time. They – both men and a woman – have said, unequivocally, that she never came to them and complained or raised issues. News organizations that have talked with literally dozens of former staffers have not found one – not one – who corroborated her allegations in any way. Indeed, many of them spoke to the culture of an office that would not have tolerated harassment in any way – as indeed I would not have.

There is a clear, critical part of this story that can be verified. The former staffer has said she filed a complaint back in 1993. But she does not have a record of this alleged complaint. The papers from my Senate years that I donated to the University of Delaware do not contain personnel files. It is the practice of Senators to establish a library of personal papers that document their public record: speeches, policy proposals, positions taken, and the writing of bills.

There is only one place a complaint of this kind could be – the National Archives. The National Archives is where the records are kept at what was then called the Office of Fair Employment Practices. I am requesting that the Secretary of the Senate ask the Archives to identify any record of the complaint she alleges she filed and make available to the press any such document. If there was ever any such complaint, the record will be there.